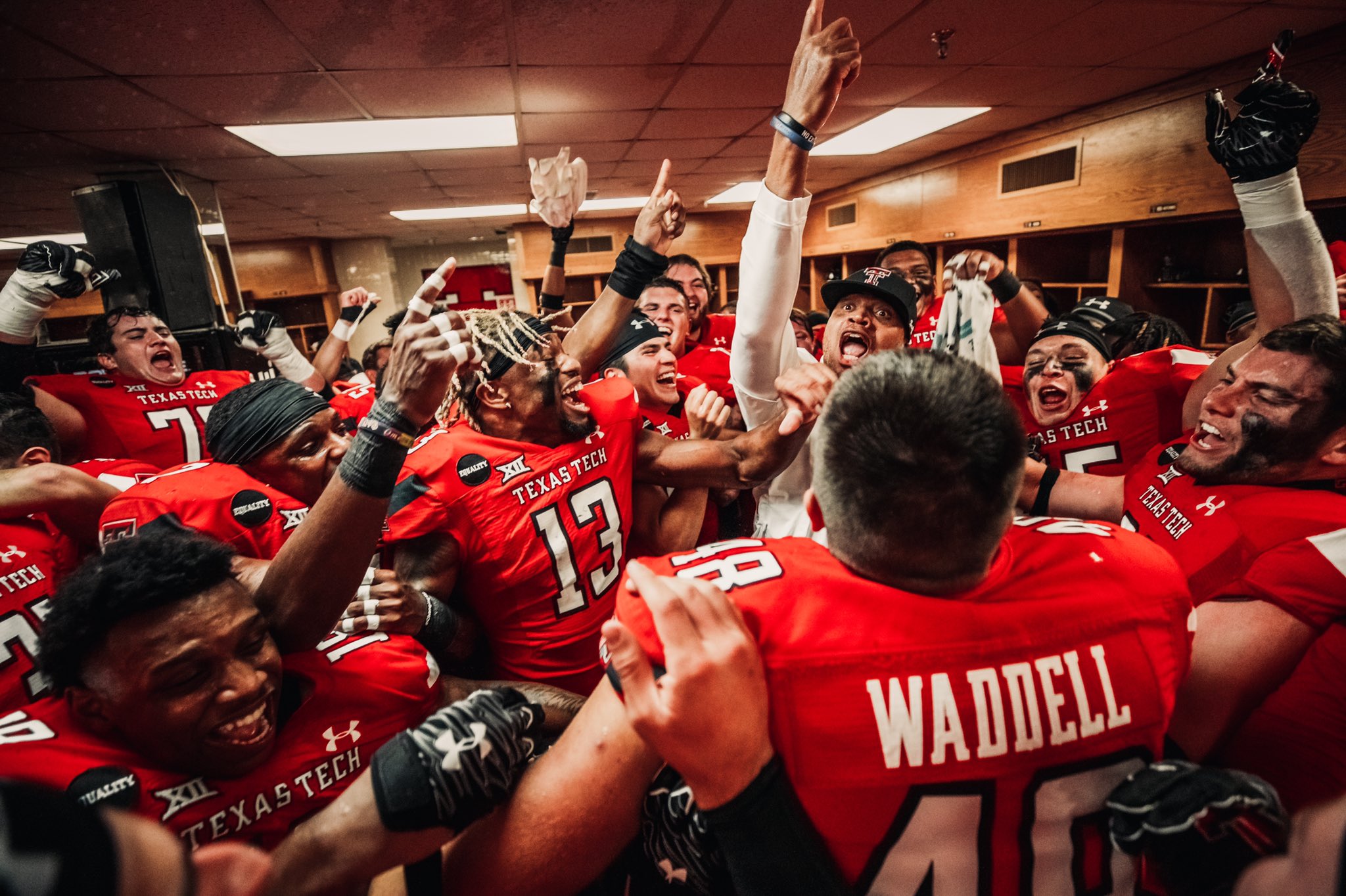 The 2021 football season for Texas Tech very well could be a make-or-break year for head coach Matt Wells.

Does the schedule do the Red Raiders any favors? Will Texas Tech make a bowl game for the first time since 2017?

Fifth Quarter projects the Red Raiders to go 7-5 this season. Let’s see where the victories and defeats will be found this year:

Confidence Level – 10
Houston was won a combined seven games in former Big 12 coach (and Mike Leach coaching tree member) Dana Holgerson’s first two seasons. He wasn’t able to hold on to star quarterback D’Eriq King and his experiment of “tanking” his first season was a disaster. While the Cougars just have to travel a stone’s throw away from campus, Texas Tech fans will show up to ensure this is a neutral crowd at worst for the Red Raiders. Expect Texas Tech to come out of the gates with something to prove. Led by a senior-laden linebacker corps, Texas Tech kicks off the season on a high note.
Week 1 result: Texas Tech 38, Houston 28 (1-0)

Confidence Level – 9
In the home opener, the Red Raiders welcome the Lumberjacks from Stephen F. Austin to Jones AT&T Stadium. Texas Tech’s talent should carry it to a convincing win, but it will need to be cautious of a letdown coming off a big win. Last year’s performance against Houston Baptist is still fresh in the minds of Texas Tech fans.
Week 2 result: Texas Tech 42, Stephen F. Austin 21 (2-0)

Confidence Level – 7
The Florida International Panthers come to town next and this could be a huge trap spot for Texas Tech. Head coach Butch Davis took FIU to three straight bowl games prior to a disastrous 2020 season in which the Panthers did not win a single game. This was a team that defeated Miami in 2019, so the Red Raiders better not look past this Conference USA opponent. Can the Red Raiders maintain focus and enter Big 12 play undefeated? They should, but confidence levels aren’t as high as they were to start the season.
Week 3 result: Texas Tech 31, Florida International 24 (3-0)

Confidence Level – 5.5
By this point in the season, there should be a pretty good grasp on what type of Texas team the Red Raiders will be taking on in their first true road game of the season. Texas plays Louisiana and travels to Arkansas to start the season. The Longhorns could look like a team to challenge Oklahoma for the Big 12 title this year, or could look like a team that regressed with a new head coach and new quarterback. However, Texas Tech is 2-1 in its last three trips to Austin and has played Texas to a one-score game in five of the last six seasons. Expect a close game, but Texas Tech comes up just short for its first loss of the season.
Week 4 result: Texas 45, Texas Tech 41 (3-1, 0-1 Big 12)

Confidence Level – 9
The Red Raiders have won two straight against West Virginia, but had lost five straight prior to starting their own streak. Neal Brown’s team has a veteran group on the offensive side of the ball, and has playmakers on defense. Texas Tech will still be reeling after a close defeat to Texas, and an October crowd at Mountaineer Field proves again to be too much for Texas Tech to overcome.
Week 5 result: West Virginia 30, Texas Tech 24 (3-2, 0-2 Big 12)

Confidence Level – 7
TCU and Texas Tech have played some pretty wild and crazy games over the last six years (two blowouts not withstanding). While the 2020 game was pretty one-sided, TCU’s offensive coordinator and (possibly) its best offensive lineman from that team will be in red in black this go around. After struggling for two weeks on the road, this is a perfect “get right” game at home for the Red Raiders.
Week 6 result: Texas Tech 35, TCU 18 (4-2, 1-2 Big 12)

Confidence Level – 5.5
The 2019 match-up between these two resulted in one of the wildest endings to a game anyone has ever seen. The 2020 match-up was equally boring and ugly, with the win going the way of Texas Tech. New head coach Lance Leipold also brings a bunch of his players from a quality Buffalo program that was very successful in the MAC. That said, Kansas still has one of the most depleted rosters in all of FBS football and the Red Raiders should win. But in what will likely be an 11 a.m. CT kickoff in Lawrence, a sleepy atmosphere keeps this too close for comfort for the Red Raider faithful.
Week 7 result: Texas Tech 24, Kansas 18 (5-2, 2-2 Big 12)

Confidence Level – 6
Kansas State will come into Lubbock on a 5-game winning streak against Texas Tech. Texas Tech has found ways to play Kansas State close during this streak, but always comes up a few plays short. Texas Tech needs to get a win here before playing the top three teams in the conference in three consecutive games. If Texas Tech can finally show the ability to make those game winning plays against a tough Wildcat team, it can be a true turning point for the program. The Red Raiders secure bowl eligibility for the first time in four seasons with a win.
Week 8 result: Texas Tech 35, Kansas State 31 (6-2, 3-2 Big 12)

Confidence Level – 4.5
Oklahoma is the premier team of the Big 12. The Sooners are not just a College Football Playoff contender this season; they are a national championship contender this year. They have beaten Texas Tech in nine consecutive meetings. So why would confidence levels not be at a 10? Oklahoma has a bye the week after this game after playing for nine consecutive weeks to start the season. The calendar is about to turn to November, when both Heisman Trophy and playoff campaigns are made. Something says the Sooners will be overlooking the Red Raiders. Now, they’re talented enough to overcome looking ahead, but something strange will be in the air.
Week 9 result: Oklahoma 56, Texas Tech 49 (6-3, 3-3 Big 12)

Confidence Level – 4
Texas Tech will have a bye, but not any rest in terms of quality of opponent after the Sooners. Not only has Iowa State head coach Matt Campbell gone undefeated against Texas Tech (5-0), but the Red Raiders have yet to come within nine points of the Cyclones during Campbell’s tenure. Similar to the Oklahoma game, Iowa State should roll in this game. But since the Kansas State win, Texas Tech continues to show improvement and fight in a losing effort.
Week 10 result: Iowa State 28, Texas Tech 24 (6-4, 3-4 Big 12)

Confidence Level – 3
Oklahoma State is one of the most popular sleeper picks in the Big 12 coming into the 2021 campaign. However, the Cowboys have Bedlam the week after coming to Lubbock. With the Sooners leaving the conference, there is no guarantee that Bedlam will be played in the near feature after the 2021 season. This is a perfect upset spot for the Red Raiders. However, the Cowboys find a way to squeak one out at the horn, pushing Texas Tech’s losing streak to three.
Week 11 result: Oklahoma State 51, Texas Tech 48 (6-5, 3-5 Big 12)

Confidence Level – 5
It makes sense that confidences levels are a coin flip for this game. In the history of these two schools, they are 39-39-1 against each other. The last two meetings have been decided by a combined four points. Second-year coach Dave Aranda is coming off a terrible first season as the Bears’ head coach, but should have this team ready to battle Wells and company to close out the regular season. If the last two meeting are any indication, expect a wild and crazy finish for the 2021 season.
Week 12 result: Texas Tech 35, Baylor 34 (7-5, 4-5 Big 12)

Love the honesty! Let’s hope for a great season!

As long as TT football fights it will be entertaining an worth watching!