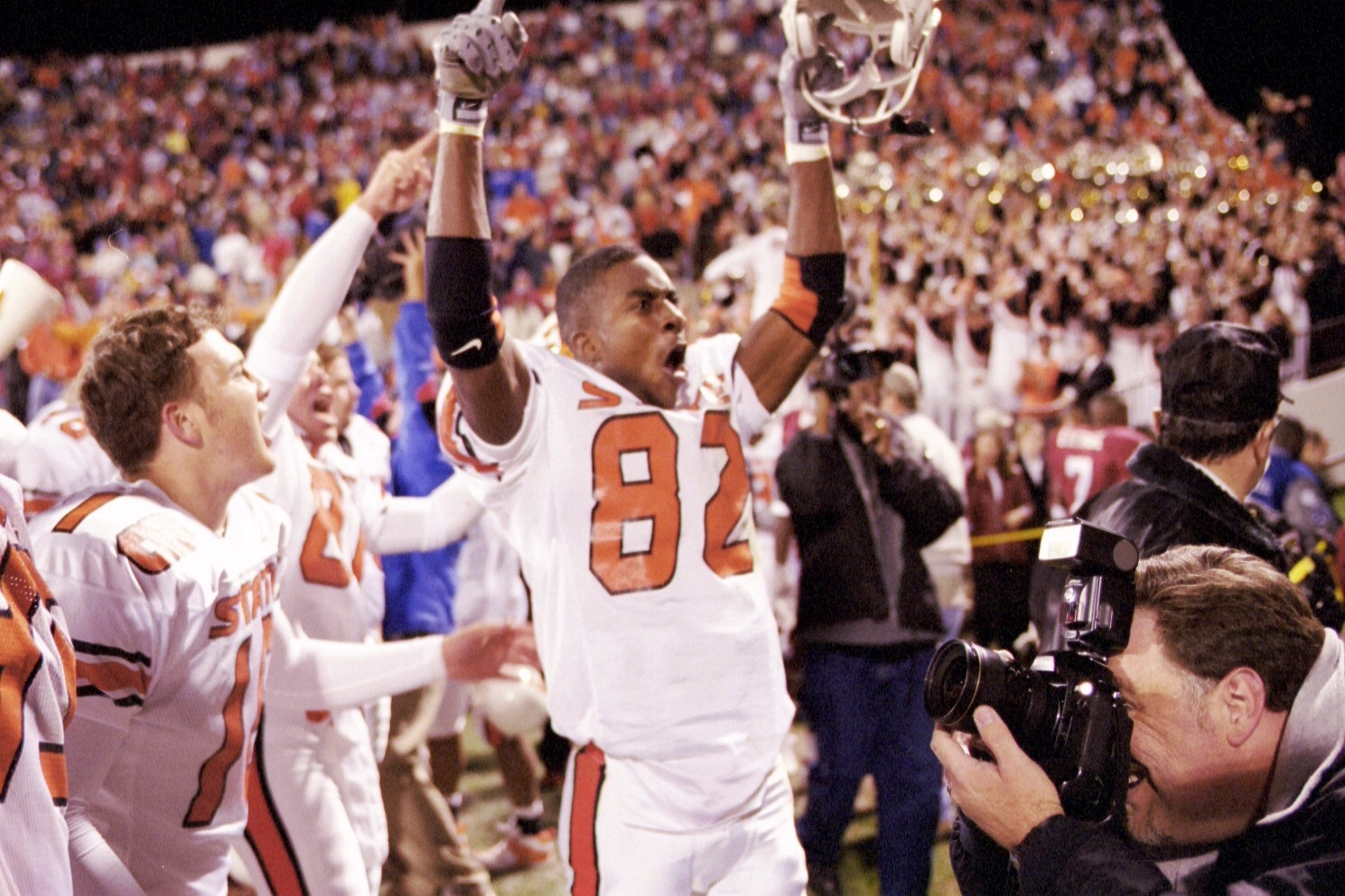 Historically, the rivalry between Oklahoma and Oklahoma State has been pretty lopsided. The Sooners have dominated the all-time series, but the Cowboys have had their moments.

One of those came on this day 20 years ago. In a case where a win would have likely put the Sooners in line for a national championship, Oklahoma State scored late to pull off the stunning upset in Norman, 16-13.

Oklahoma State had little more than pride to play for as it arrived at Oklahoma Memorial Stadium on Nov. 24, 2001. The Cowboys were 3-7 under first-year head coach Les Miles and had lost two straight in the series.

Oklahoma was the reigning national champion and still had hopes for a repeat bid. The Sooners were 10-1, ranked fourth in the country and on a 3-game winning streak.

For Oklahoma, not much went right throughout the evening. It however, was an Oklahoma State miscue that would set up the game’s first points.

Quarterback Aso Pogi had two of his first nine passes intercepted and Miles decided to make a change to Josh Fields. At first, little changed. Matt McCoy’s interception of Fields early in the second quarter set up the Sooners in the red zone. That drive ultimately culminated in a touchdown run by Quentin Griffin.

From there, Oklahoma State’s Luke Phillips and Oklahoma’s Tim Duncan traded field goals. Phillips connected on a pair of kicks from beyond 50 yards and his third make of the night cut the deficit to 13-9 midway through the fourth quarter.

Hardly regarded as a juggernaut, the Cowboys’ defense had a night to remember. The next two drives for Oklahoma resulted in a 3-and-out. With just over three minutes to play, Oklahoma State was 65 yards from victory.

Fields completed his first four throws on the drive, including a 30-yard strike to Terrance Davis-Bryant that moved the ball to the Sooners’ 11-yard-line. On the very next play, the Cowboys went ahead for the first time and for good.

Fields lofted one into the corner of the end zone for standout wide receiver Rashaun Woods. Woods outleaped Oklahoma’s Derrick Strait for the touchdown and the Cowboys led.

More than a minute and a half remained for the Sooners, who would actually get two more possessions. The first resulted in four incomplete passes. The last resulted in an interception of Oklahoma quarterback Nate Hybl’s desperation heave by Marcus Jones.

Oklahoma State held the high-powered Sooners to just 220 yards of offense — none rushing — while recording seven sacks and three interceptions. Marcus Jones tallied two of those picks while Paul Jones had the other.

Fields passed for 231 yards in the victory. Woods led all receivers with eight catches for 129 yards.

There weren’t many for Oklahoma State in 2001, but the rivalry victory sent the Cowboys out on a high note. The 4-7 campaign would be the only losing season in four years under Miles.

Oklahoma would bounce back to beat Arkansas in the Cotton Bowl to finish 11-2 and No. 6 in the final polls. The loss to Oklahoma State however, would cost the Sooners not only a shot at a national championship, but a Big 12 Championship berth as well. It came on this day two decades ago.