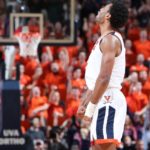 Photo by Matt Riley/Virginia athletics “Who’s going to get the bucket?” It’s the question that’s asked in every gym across America as a basketball game hangs in the balance down the stretch. As the clock bleeds down to the final minutes and every dribble is magnified, it’s a question that doesn’t even need to be spoken out loud. Every coach, player and fan alike knows … END_OF_DOCUMENT_TOKEN_TO_BE_REPLACED

“Next man up” - it’s a phrase that’s been thrown around since the day Walter Camp invented football. As amazing as sports are, the inherent risk of injury is the eternal elephant in the room. In college football, the teams that win in September are usually the most talented and well-coached units. Preseason predictions appear credible when based off a team’s projected depth … END_OF_DOCUMENT_TOKEN_TO_BE_REPLACED

Tomas Woldetensae found the ball in his hands as the shot clock wound down early in the second half. The first year Wahoo threw a high pass to Mamadi Diakite, who caught the pass above his head, and without hesitation, released a high-arching shot to beat the buzzer. The 10-footer from Diakite clanged off the rim this time, but the last two seconds of this Virginia possession … END_OF_DOCUMENT_TOKEN_TO_BE_REPLACED