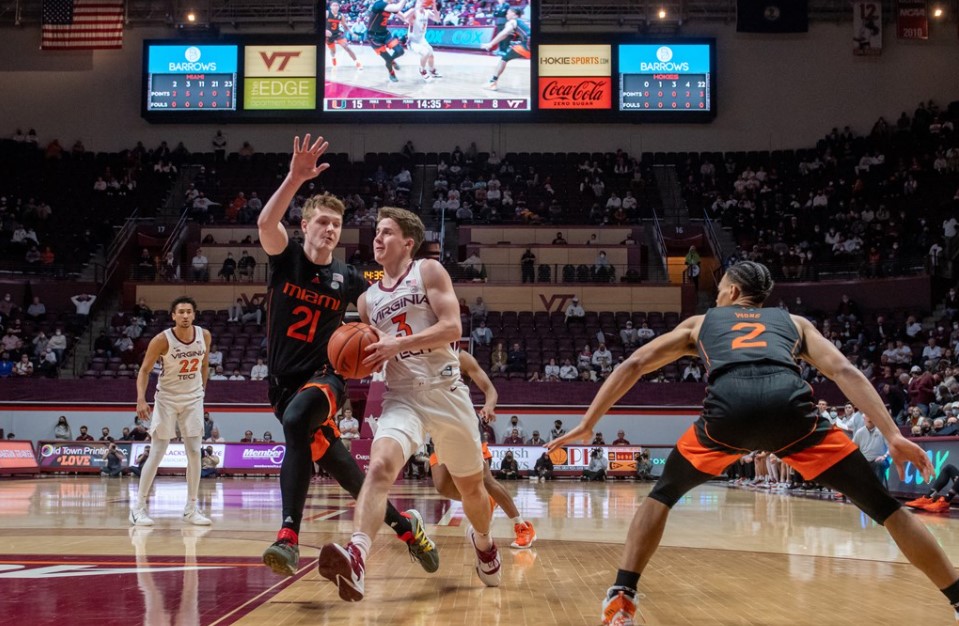 After fighting, scratching and clawing its way back into the NCAA Tournament picture, it all comes down to this.

Winners of seven of its last eight, Virginia Tech has given itself a shot. Through potent play down low, relentless rebounding and defensive display, the Hokies (17-11, 9-8 ACC) have seemed to figure it out towards the tail end of the 2021-22 campaign.

The problem is, without a win this afternoon, it was all for naught — at least in terms of qualifying for March Madness.

With just one more opportunity currently residing on the schedule, the maroon and orange are ready for one more last push at an ever-so-important quadrant one victory.

With a win? Virginia Tech’s got a chance. With a loss? Either win the ACC Tournament or prepare to host NIT contests.

That’s why this afternoon’s game against the Miami Hurricanes (20-8, 12-5 ACC) qualifies as a make-or-break, especially against a squad the broke the Hokies’ hearts on a half-court heave earlier this season.

It wasn’t exactly pretty, but Mike Young’s crew will take a win just about any way they can get it at this point in the season.

That’s all the Hokies have to do — find a way to win. That’s exactly what they did in a 62-58 victory over Georgia Tech on Wednesday evening.

The trio of Keve Aluma, Nahiem Alleyne and Darius Maddox paced Virginia Tech with 12 points each in this one. Aluma added 10 rebounds of his own, tallying yet another double-double down the stretch.

Virginia Tech got just four points out of Justyn Mutts and just two points out of Storm Murphy, but not to worry. Sean Pedulla and David N’Guessan’s combined 13 points certainly evened things out. The Hokies’ bench continues to come through in the clutch as the season continues to venture on.

25% from deep and 13 turnovers certainly won’t cut it going forward, however. It’s fair to say that Young’s team has it all out in front of them. Strong play will be a requirement to take advantage, especially down in Coral Gables.

So can the Florida sun light up Virginia Tech on the offensive end as it did at Florida State earlier this season? We’ll see.

The quickest way for Hokie fans to forget about the Charlie Moore answered prayer from mid-court earlier this season? Get a statement win in South Florida against one of the best teams in the ACC.

That won’t come easy, though.

Picked 12th in the league’s preseason poll, the Hurricanes currently stand as the No. 3 seed in the upcoming ACC Tournament.

A big reason? The guard play — all four of them. Miami’s backcourt is big, strong, physical and aggressive.

Kameron McGusty (17.8 points per game, 5.1 rebounds per game) leads the way for the ‘Canes when it comes to offensive ability.

Then you can’t forget about Sam Waartenburg (8.5 points per game) down low. He’s a challenging post player who put up 12 points the last time these two squads met in January.

It’ll be quite the task for Virginia Tech to deliver with its season on the line. But it’s doable.

Do the ‘Canes have another trick up their sleeve? We’ll soon find out.

This should be an incredibly fun basketball game to watch with both squads playing for something rather important.

It’s a matchup that’s actually fairly even. But with Miami on its home floor, it’s hard to pick against the ‘Canes.

The Hurricanes will outshoot Virginia Tech and became a lock for the NCAA Tournament, ending the Hokies’ at-large hopes in the process.