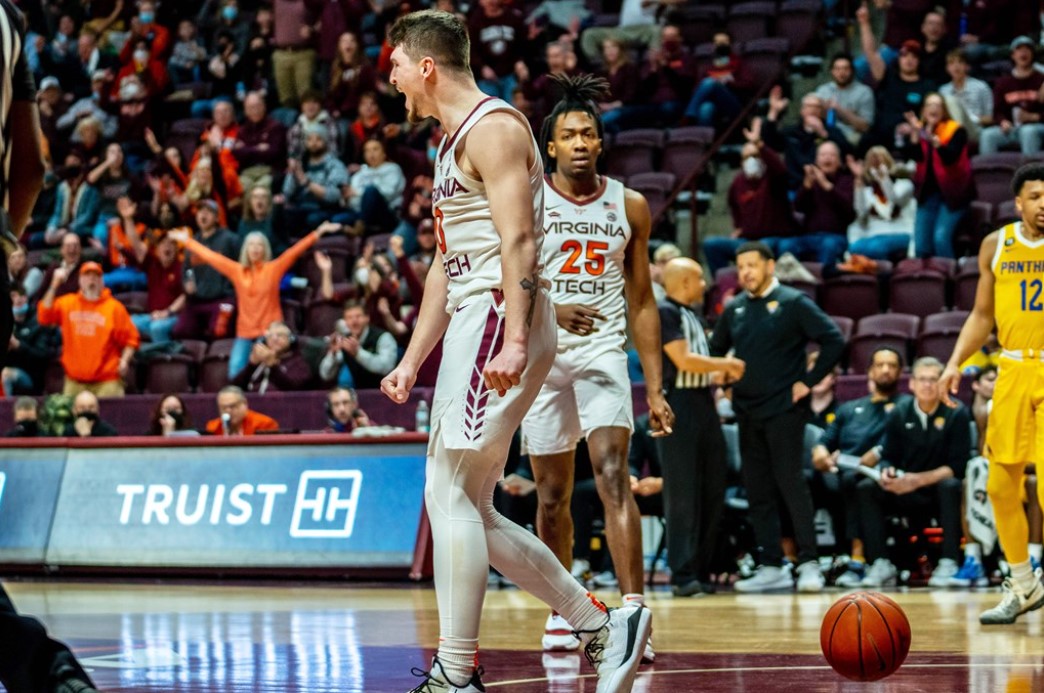 A clear picture has been painted.

A specific goal now finally in place to try to measure its attainability.

As the 2021-22 season begins to wind down to the 11th hour, so does Virginia Tech’s hopes at a fifth straight NCAA Tournament berth.

The Hokies (14-10, 6-7 ACC) have steeply climbed their way back into consideration. But now, the real test awaits.

A make-or-break stretch of play begins tonight for the maroon and orange. The Syracuse Orange (13-11, 7-6 ACC) travel to Blacksburg to face the hungry Hokies, poised to pop a bubble while potentially blowing one of their own.

Sure, it may be against some of the weaker competition within the ACC, but after Virginia Tech’s 74-47 victory over Pittsburgh on Monday evening, it became increasingly clear what’s been clicking recently for Mike Young’s club.

Take Storm Murphy for example. The Wofford graduate transfer has become much more accustomed to playing at the Power 5 level, and with his recent offensive outbursts both in the Steel City and at home against Georgia Tech, it’s quite clear that the Wisconsin native has found his form on a consistent basis.

Of course, the play of Keve Aluma, Justyn Mutts and Hunter Cattoor has always been there. But another key ingredient to a successful campaign has started to provide a nice cushion for the maroon and orange.

Sean Pedulla continues to knock down shots from the outside.

Darius Maddox, the former ESPN 100 recruit, has really stepped up his game up of late on the defensive end. Meanwhile, his offensive capabilities continue to flourish. He’s shooting 52% from the field and 51% from three.

Then what about David N’Guessan? The Netherlands native has provided substantial minutes down low to give Aluma a breather. He gives Young and company a solid asset out of the bullpen in case the Hokies need some relief.

It all seems to have come together for Virginia Tech. Three big home games now await.

Can it continue rolling? Let’s see.

It all seemed like it was coming together for Syracuse under longtime head coach Jim Boeheim – as it always does.

Then standout center Jesse Edwards went down for the year.

Much like the Hokies, the Orange find themselves riding on four consecutive victories. While continuing their winning ways will be tough without Edwards down low, there’s still plenty of pieces to help fill the void.

Cole Swider (13.2 points per game) provides a presence in the paint, but it won’t be the same without the Orange’s intimidating interior threat.

Syracuse is a team that had modest expectations coming into the season after being picked to finish sixth in the conference.

Alas, after a slew of bad losses early on, Syracuse now finds itself needing to dig out of a monstrous hole.

Don’t you love swing games like these in the middle of February?

One play, one moment, can excel or derail one or another’s season.

Both squads are playing well, but Virginia Tech is just clicking on too many cylinders to lose a game like this at home. Compliment that with no Edwards, and the Hokies now possess a huge matchup problem for the Orange down low.

Virginia Tech will win a fun one at Cassell Coliseum, extending its win streak to five games in the process.