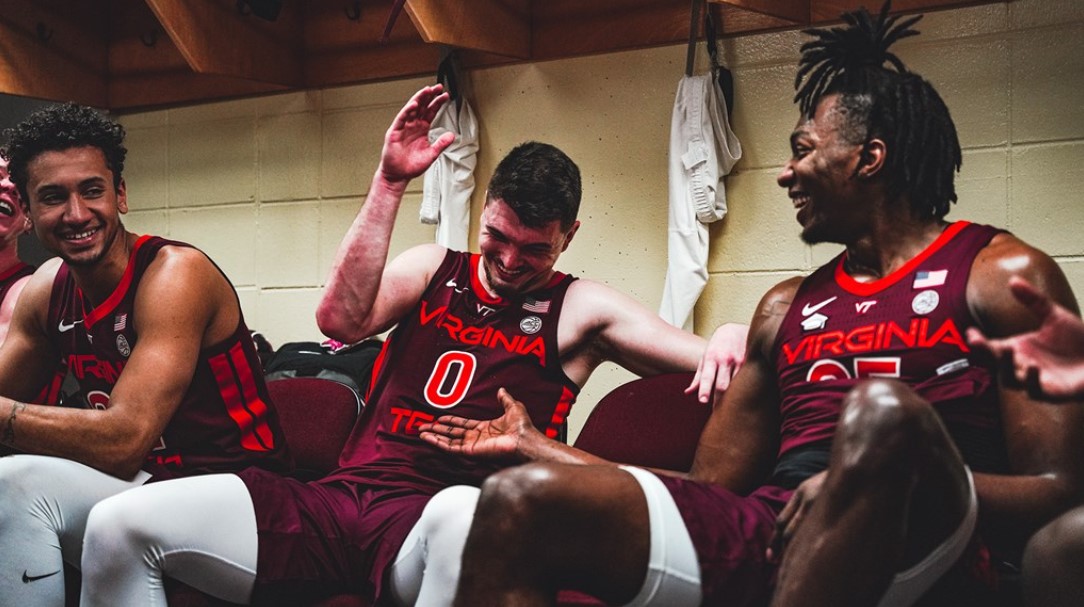 Looking shell-shocked, defeated and in disarray, though at the same time, being oh so close, it seemed as if Virginia Tech was dead to rights just a smattering of days ago.

Now looking connected, cohesive and rhythmic, it appears that the Hokies (11-10, 3-7 ACC) have the tools to figure it out within the 2021-22 campaign.

Though there’s still much work left to do, the vision is there for a successful finish. The foundation is in place for an eventful final month of play, and the momentum is shifting after weeks of devastating defeats.

Luckily for the maroon and orange, so does the schedule in a favorable way. Now can they take advantage? We’ll see starting this evening.

A winnable stretch of play tips off tonight inside Cassell Coliseum. The Georgia Tech Yellow Jackets (9-11, 2-7 ACC) make the trip to Blacksburg to face a hungry Hokie bunch that continues to search for a hefty collection of conference victories.

After weeks of frustrating finishes, deflating defeats and a slew of gut-punching losses, it was just a matter of time before it was all going to come together for Virginia Tech.

Just days after losing on a half-court heave, the Hokies finally had a complete performance. It was a nice response for sure.

Unfortunately for the folks in Tallahassee, it came at the expense of the Florida State Seminoles — a team the maroon and orange hadn’t beaten on their home floor in nearly 32 years.

72% from three, 63% from the field, and 47 combined points from Hunter Cattoor and Sean Pedulla certainly will get a struggling squad over the hump.

Cattoor’s career-high 27 points led all scorers on Saturday afternoon, but let’s not stop there. The Florida native was a whopping 9-for-11 from beyond the arc, tying Justin Robinson’s single-game record for treys.

Pedulla certainly couldn’t miss either. 6-of-7 from downtown will absolutely do for the freshman standout, providing a spark to a team that had been searching for answers after vastly underachieving.

It really couldn’t have been scripted any better for Virginia Tech.

Now, can it show this wasn’t a fluke and continue its winning ways on its home floor?

If you remember correctly from a season ago, Georgia Tech was widely considered to be on the wrong side of the NCAA Tournament bubble prior to a trip to Greensboro for the ACC Tournament.

A week later, the Yellow Jackets hoisted their first conference championship trophy since 1993, and found their way into the big dance for the first time since 2010.

It’s been quite the journey for sixth-year head coach Josh Pastner and company since his arrival in 2016. Years of misery down on the flats all came to an end less than a year ago. But this isn’t exactly the same type of team that Georgia Tech trotted onto the hardwood a year ago.

Out goes Jose Alvarado. Out goes Moses Wright. Those were the two cornerstone pieces to that championship team.

Michael Devoe (18.1 points per game) and Jordan Usher (15.4 points per game, 7.2 rebounds per game) still remain. Both provide some continuity for the Jackets in a mostly rebuilding season for Pastner’s club.

There’s still some athleticism and still some talent that swarms the floor for Georgia Tech. But with no Wright, it’s no secret the Yellow Jackets have had some trouble down low.

Kyle Sturdivant (7.2 points per game) has been another nice piece to have in the backcourt, but beyond that, there’s still much left to be desired.

Sure, this Georgia Tech team isn’t the one that came into Blacksburg and won a season ago.

But it’s still a team that has enough firepower at the top of the rotation to pick off counterparts who get caught sleepwalking.

This next week poses massive opportunities for Virginia Tech to tally victories in the win column.

Tonight’s a night the Hokies can’t let get by them without adding to that total, and they won’t.

Virginia Tech will keep the momentum going and take advantage of a team that still struggles to find its identity in the late stages of the season. The faithful at Cassell Coliseum will go home happy.