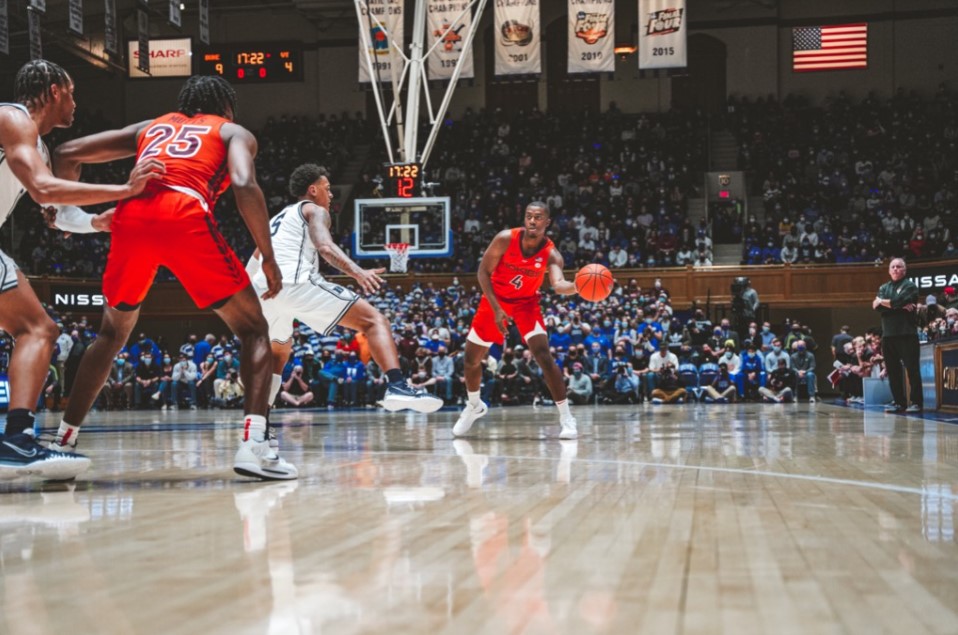 Heading into 2022, it seemed as if it all had returned to normalcy.

It seemed as if all the COVID-19-related cancellations, postponements, and overall issues were an object of the past that could no longer hurt the college athletics landscape.

As it turns out, that wasn’t exactly the case.

Just ask Virginia Tech, or the majority of the other teams in college basketball.

It’s been 13 days since the Hokies (8-5, 0-2 ACC) last suited up on the hardwood. Recent concerns regarding the virus pushed back two key ACC matchups.

But finally, after nearly a two-week hiatus, the maroon and orange get to play basketball once again, with the NC State Wolfpack (7-7, 0-3 ACC) set to be the counterpart.

There rarely is a good time for a program to go on a pause for health and safety protocols.

The Hokies’ case scenario is certainly no exception.

A thumping of Atlantic 10 favorite St. Bonaventure in Charlotte, and a game at No. 2 Duke in which Virginia Tech controlled over half of the contest preceded the ill-timed postponements against both North Carolina and Pittsburgh.

Mike Young’s bunch was really starting to click on all cylinders, find their rhythm, and live up to their preseason hype. Alas, the nearly two-year-long pandemic continues to impose its will.

It seems like ages ago when the Hokies fell to Duke at Cameron Indoor Stadium when it occurred just three days before Christmas. Despite the loss, it was an encouraging outing when looking at the trajectory of this team.

Using 17 first-half points from Keve Aluma, Young’s team clanged to 36-32 lead at the intermission. But with the second-ranked Blue Devils shooting nearly 60% in the second half, it quickly became an uphill battle for a slow-paced Virginia Tech team.

25 points from Aluma and 20 points from Justyn Mutts proved not to be enough. The Hokies drilled just one triple over the final 20 minutes and couldn’t find any offensive firepower that resulted in a 76-65 defeat.

The honeymoon phase is now over though.

Coming off a COVID pause, will the Hokies be conditioned enough to compete for a full 40 minutes? The question looms large.

Strength in the Pack

It’s been a tough go-around for head coach Kevin Keatts and company early on in the 2021-22 campaign.

For a team with modest expectations, being picked ninth in the ACC, the Wolfpack haven’t exactly lived up to the number next to their name. They’ll be the first to tell you that.

In fairness, a lot of that has to do with the loss of star forward Manny Bates, who suffered a season-ending shoulder injury in the opening minute of NC State’s season-opening victory over Bucknell.

Since early December, the Pack have dropped six of their last seven outings and are losers of five straight. That includes a loss to 6-7 Wright State.

Things certainly haven’t been pretty in Raleigh, but the Wolfpack still possess a talented bunch capable of moving their way into the heart of the ACC.

The show starts with Dereon Seabron, who can play all over the floor for NC State.

The Norfolk native currently sits third in the ACC in scoring, averaging 19.6 points per game, and has been a lethal weapon for the high-scoring Wolfpack all season long from start to finish. Seabron scored 32 points on 12-for-14 shooting his last time out in a home loss to Florida State.

It just felt as if this team was ready to finally put it all together when the season came around. Now five years into the Keatts era, it still feels as if NC State has a long way to go.

A win in Blacksburg Tuesday evening could do wonders for the Wolfpack the remainder of the way.

Pre-COVID issues for Virginia Tech, we would’ve picked the Hokies without question.

But what type of shape are they going to be in? Will they be able to pick up where they left off that night at Cameron Indoor?

It’s risky, but with the way the Pack’s season is heading, and with Virginia Tech being a more talented team, we’ll take the Hokies at home in a close one.