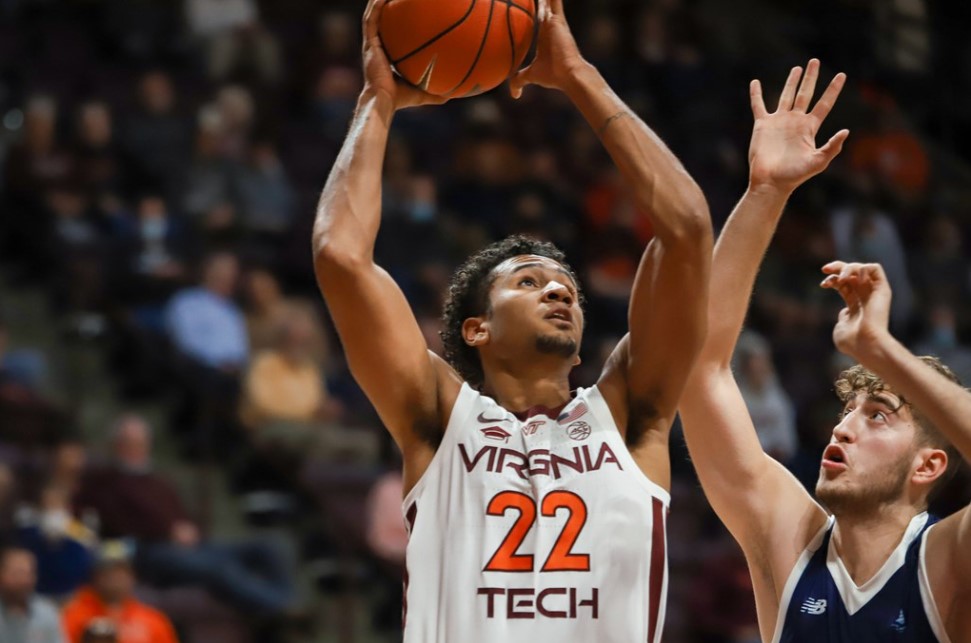 The Hokies are long, lengthy, look legit, and have the appearance of a team with a lot of potential for the 2021-22 campaign.

The difference this season for head coach Mike Young and company is that there are very few cupcakes on the non-conference slate. Friday night will be the first of quite a few tough tests.

Virginia Tech will look to continue to put the ACC on notice as it travels to Annapolis to take on Navy. The Midshipmen are fresh off a notable upset on Tuesday evening.

Smooth, rhythmic, polished — not things often said about a team during a season opener. But that was the overall feeling inside Cassell Coliseum on Tuesday evening.

The Hokies shot 53% from the field, 43% from three, and forced 19 turnovers en route to a dominant 82-47 victory over Maine to tip off the season.

The standouts? Delaware transfer Justyn Mutts, and Netherlands native David N’Guessan. Both put up 15 points to lead all scorers. For the former, it was a career-high.

You couldn’t have scripted it any better if you’re Young: A crowd of over 6,000 sat back, ate some popcorn, and took in a basketball game at Cassell Coliseum for the first time in 615 days.

The Hokies are rolling. Now, can they follow it up? That’s always the next step.

Where else would you rather be on Veterans Day weekend?

Virginia Tech took in the sites and sounds on the campus of the U.S. Naval Academy this past Thursday. But now they’ll have the opportunity to suit up against a pesky Midshipmen team as a part of the Veteran’s Classic in an area colluded with Virginia Tech alumni. One has to admit, that’s pretty cool.

Oh, and by the way, Navy is coming off of a 66-58 upset over No. 25 Virginia in Charlottesville. That’s the epitome of brutality. To quote Jon Rothstein, “College Basketball. Where the unexpected becomes the ordinary.”

It’s a program that hasn’t reached the NCAA Tournament since 1998, but the Midshipmen are coming off a season in which they finished 15-3, and they return their second-leading scorer in guard John Carter Jr.

The Tennessee native put up 19 points in Navy’s victory on Tuesday night. Complement him with fellow guard Sean Yoder, and that’s a solid one-two punch for head coach Ed DeChellis and company. Not only that, the Midshipmen didn’t have a single underclassman in Tuesday’s starting lineup, so there’s a wealth of experience there.

It’ll take another solid shooting performance beyond the arc for Navy to pull off a second straight shocker. DeChellis’ team will have to rival the 52% from deep it shot in Charlottesville earlier this week.

It should be a fun atmosphere inside Alumni Hall on Friday night.

Fresh off an upset and with an ACC team coming in, all the cards are on the table for the Midshipmen’s second consecutive upset.

Unfortunately for Navy, the Hokies will dominate down low with Aluma’s post presence. They’ll feed the Maryland native on their way to a second straight victory to begin the season.