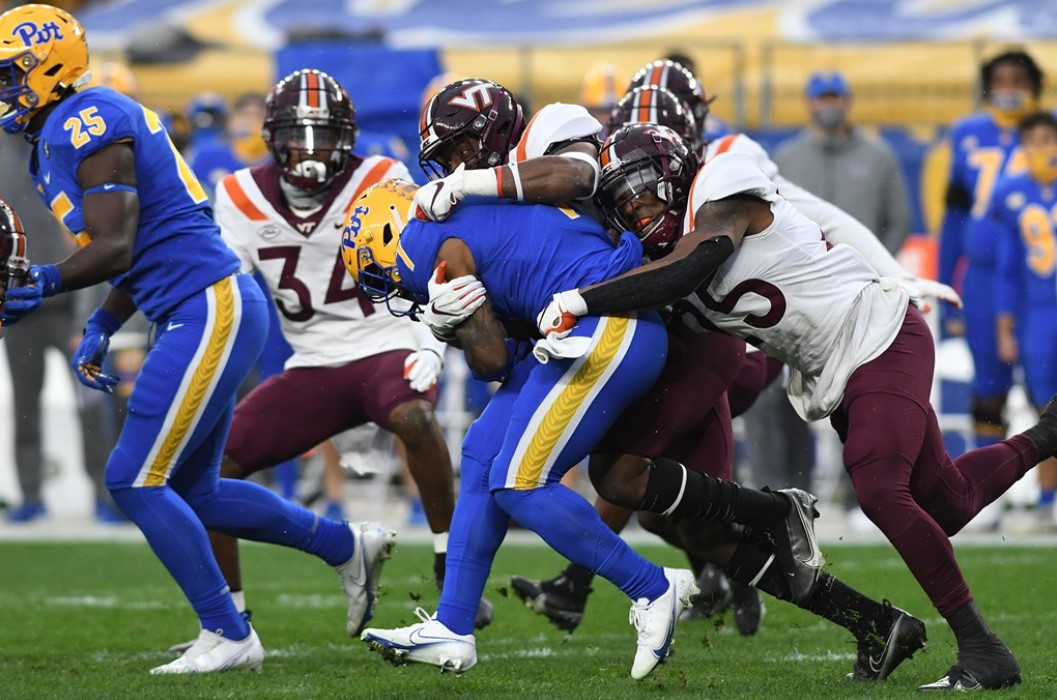 “Coastal Chaos” is one of the true gems of college football.

It’s Duke, then it’s Georgia Tech, then it’s North Carolina, then it’s Virginia Tech, then Miami, and Pittsburgh, and Virginia. Those are the last seven Coastal Division champions. Seven schools, in seven years. ‘Tis a true imperfectly beautiful snapshot of what Saturdays in the fall can bring to the table.

This year however, the ice breaks. The Coastal will be crowned to a team that’s been deemed champions before over the last eight seasons for the first time since 2012.

The fun part is that Saturday’s game in Blacksburg could determine who gets to make the trip to Charlotte on Dec. 4. But with the craziness this division possesses, you never truly know.

The Pittsburgh Panthers (4-1, 1-0 ACC) will come to Blacksburg this weekend to take on the Virginia Tech Hokies (3-2, 1-0 ACC) looking to leave with control of their own destiny, while setting their sights on their second division titles in three tries.

There are plenty of ways to describe last week’s 32-29 loss to No. 14 Notre Dame if you’re a Virginia Tech fan. A missed opportunity, a gut punch, a slap to the face. That’s just a few ways to describe how you were feeling walking out of Lane Stadium late into the Southwest Virginia night.

The Hokies jumped out to an early 10-0 lead in this one. But two quick strikes and a quarterback switch later, the Fighting Irish quickly clung to a 14-10 advantage that would’ve been the halftime score had it not been for a 52-yard John Parker Romo field goal that pulled Virginia Tech to within one at the break.

Missed opportunities. That seems to be a recurring theme for this Virginia Tech squad. An opening drive field goal kickstarted the Hokies in the second half after a touchdown was called back due to an ineligible man downfield. Virginia Tech had the lead again, 16-14.

Missed opportunities. On the ensuing Irish possession, the Hokies received a gift defensively. Quarterback Tyler Buchner threw one right into the hands of defender Armani Chatman — only for it to be dropped. Hokies’ quarterback Braxton Burmeister threw an interception of his own the very next possession that led to a house call for Notre Dame’s Kyren Williams.

That’s when Jermaine Waller stepped in. The future All-American read Buchner’s eyes like a book, picking him off and waltzing into the end zone for a go-ahead pick-6 that put the Hokies on top, 22-21. A controversial decision to go for two from the 8-yard-line kept the lead at one.

It was then Burmeister’s turn. He had left the game earlier due to a shoulder injury. Despite playing with a numb right arm, and pain-killing his way through the rest of the contest, the Oregon transfer made a play that should’ve put the game away. Burmeister scampered from 19 yards out on a 3rd-and-15 into the end zone to give Virginia Tech a 29-21 advantage. Resilient.

Unfortunately for Burmeister and Virginia Tech, it was all for naught. The Irish drove down the field twice in a span of just three minutes that culminated in a 48-yard kick from the leg of Jonathan Doerer that split the uprights and gave Notre Dame the 32-29 victory.

Missed opportunities. That’s what plagued the Hokies in this one.

The biggest question heading into this one? What’s the health status of Burmeister?

We know he’s playing, but how healthy is he? And what does that say about how head coach Justin Fuente and company feel about the rest of their quarterback room with backup Connor Blumrick now sidelined for an indefinite amount of time?

All last week, we talked about whether Virginia Tech could find its identity offensively without star tight end James Mitchell. Well, the Hokies did get a step closer last Saturday, but progress moving forward depends on Burmeister’s health.

Raheem Blackshear has seemed to emerge as the clear cut “guy” to get carries for this Hokie offense. The Rutgers transfer powered his way to an opening-drive touchdown against Notre Dame. His physicality and speed also allow the Philadelphia native to make plays in space when it comes to the receiving game.

With the Panthers’ ability to score, don’t be surprised if Virginia Tech implements a similar game plan to the season-opener against North Carolina. Milking the clock, running the football, and keeping the ball out of quarterback Kenny Pickett’s hands are things Virginia Tech will want to accomplish on Saturday afternoon.

That’s where Blackshear comes into play.

Defensively, there’s some question marks heading into this one.

Star linebacker Dax Hollifield will be forced to miss the first half after being called for targeting in last week’s loss to Notre Dame. Redshirt sophomore Keshon Artis and redshirt freshman Dean Ferguson will have to step in for Virginia Tech’s defensive leader.

The secondary will need to step up as well. Safety Tae Daley will have to rebound from a rough outing last weekend for the Hokies. The defensive front also needs to do a better job of getting pressure.

Defensive coordinator Justin Hamilton will look for those two groups to return to early-season form. That’ll be a must if Virginia Tech is to stop this lethal Pittsburgh offense.

What To Watch For – Pittsburgh

It’s no secret what Pittsburgh and head coach Pat Narduzzi are going to bring to the table.

It feels like Pickett has been behind center forever up in the Steel City. The Hokies are set to face the potential Heisman Trophy candidate for the fifth time in his college career. The scary part? He’s gotten better each year.

A Narduzzi-coached team typically possess an elite defense and an average offense. This year, it’s quite the opposite.

The Panthers come into Lane Stadium with one of the best offenses in the entire country. They’re loaded with weapons to surround the already-potent Pickett.

Jordan Addison will be the biggest threat against the Hokies in the secondary. The sophomore receiver has brought in 29 receptions for 524 yards, and nine touchdowns so far in 2021.

He’s far from alone, though. Fellow receivers Taysir Mack and Jared Wayne have combined for 525 yards of offense. Tight end Lucas Krull has hauled in 15 receptions for 193 yards and five touchdowns as well. Pittsburgh is loaded in the passing game.

The backfield has talent, too. Israel Abanikanda and Vincent Davis have a combined 410 yards and six touchdowns on the ground.

Coordinator Mark Whipple’s side of the ball hasn’t scored less than 41 points this season. If it wasn’t for a defensive letdown against MAC foe Western Michigan, Pitt would be sitting pretty at 5-0 and likely in the top 20.

The offense is absolutely deadly.

Defensively, it’s a drop-off from where the Panthers have been the last couple of seasons after losing standouts, such as star safety Paris Ford. It’s still a solid bunch, however. Brandon Hill and Damarri Mathis are a solid duo in the secondary. Linebacker SirVocea Dennis brings some continuity to the middle of the field.

Don’t mess with Habakkuk Baldonado up front, either. The Italian leads the team with 3.5 sacks so far this season.

The Hokies should have plenty of motivation after a 47-14 thumping at the hand of Pitt at Heinz Field last season. A victory to get the edge in the Coastal may just be what Fuente’s team needs for those bad memories to fall by the wayside.

We mentioned it before: For Virginia Tech to win this game, the Hokies are going to have to execute a similar game plan to the 17-10 win over North Carolina on Sept. 3.

The formula is simple: Bleed the clock, pace the offense, and keep the ball out of the Panthers’ hands offensively.

The Hokies have to play the takeaway game.

How else can you steal an offensive possession away? Turn the opponent over. Virginia Tech will probably need a couple of those to win on Saturday.

Those offensive red zone woes continued in Virginia Tech’s loss to Notre Dame. It can’t happen anymore if the Hokies want to get to Charlotte.

When a team can score like the Panthers, you have to capitalize on scoring opportunities. Field goals won’t win on Saturday.

Virginia Tech’s defense is a solid group. But with no Hollifield for the first half, and some question marks after last week’s loss, we don’t think they’re going to slow down Pickett and the Pitt offense enough.

It just doesn’t feel like the Hokies’ offense will be able to keep up with the explosiveness that the Panthers possess. Pittsburgh will take down Virginia Tech at Lane Stadium and take control of its own destiny in the Coastal division.