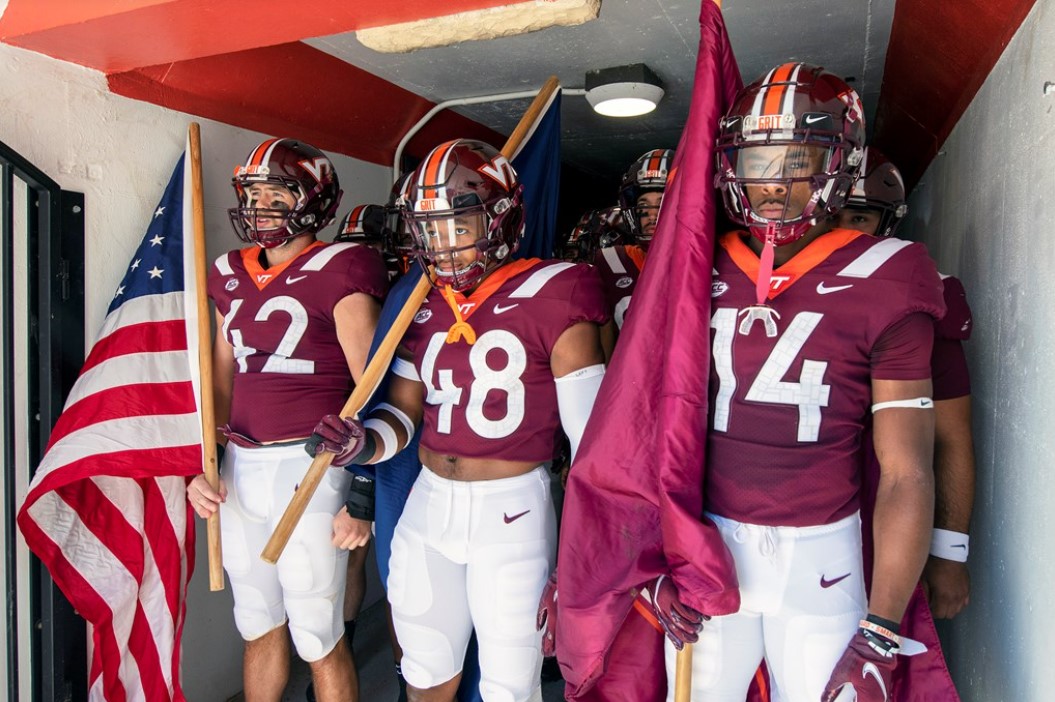 There are but so few iconic brand names throughout the college football landscape, much less ones that pay a visit to Lane Stadium.

Ohio State? Yes. Miami? Even in the day abd age we are now, perhaps. The old Florida State teams? One probably could throw the Seminoles in there as well. But Notre Dame? It’s the cream of the crop.

The Fighting Irish paid their first visit to Blacksburg back in 2018, and it showed that there really is something truly special about welcoming in that Irish gold.

Luckily for the Virginia Tech Hokies (3-1, 1-0 ACC), they’ll have another opportunity to pick off this college football cathedral after throwing their last two chances by the wayside. No. 14 Notre Dame (4-1) will take the “Victory March” down to Blacksburg with the hope of securing a third straight win against a hungry Virginia Tech team.

If both Notre Dame and Virginia Tech were single individuals looking to find a match for each other on an online dating platform, it wouldn’t take long for the two schools to be paired up for a potential blind date.

It’s eerily similar how much these two teams resemble each other: Sputtering offenses, solid defenses. The reasons however, aren’t exactly the same.

The Fighting Irish can’t determine who their quarterback should be. The Hokies have yet to find an identity.

The season trajectories have also been quite different. Notre Dame came in with lofty expectations under longtime head coach Brian Kelly. The Irish found themselves ranked No. 9 in the country to kick off the season.

Close-call victories against a bad Florida State team and Toledo showed some deficiencies. Then, wins over Purdue and No. 18 Wisconsin glimmered promise for a Notre Dame team that looked vastly lackluster early on in the season.

Last week, the luck ran out. A loss to No. 7 Cincinnati snapped a 26-game home winning streak, as the Bearcats thoroughly dominated the Irish in route to a 24-13 victory in South Bend.

For the Hokies, the season has been a big giant question mark.

A victory over then-No. 10 North Carolina shined the spotlight on Virginia Tech, but a loss to West Virginia two weeks later and an uninspiring performance against FCS Richmond gave fans plenty to be concerned about despite the 3-1 start.

Both teams will get their opportunity to regain momentum this weekend. Both badly need a victory to spin their season back in the right direction.

For head coach Justin Fuente and company, there’s still an early-season type of unknown as we head into the second week of October. That is far from ideal.

We still don’t know what we’re going to get out of this team.

Can Virginia Tech properly utilize the passing attack the way it was hyped coming into the season? We finally saw star receiver Tre Turner get loose a couple times in the victory over the Spiders.

Can the running game, starting with Raheem Blackshear and Jalen Holston, get going? A combined 303 yards on the ground between the two to start the season certainly isn’t what fans envisioned for what should be a dynamic duo.

Will the Hokies be able to fill the void left by injured tight end James Mitchell? They’ve tried so far with Drake Deluliis, Nick Gallo, and Kaleb Smith. That question still hasn’t been answered.

Will quarterback Braxton Burmeister be able to run a read option effectively? Can he execute open throws downfield? There is still a lot left to be desired for this Virginia Tech offense.

The potential is there; the Hokies just need to execute.

The defense however, has been strong. The front has been solid, the linebacking corps has been phenomenal, the secondary has done its job. So far, the effort is exactly what defensive coordinator Justin Hamilton and company hoped for.

That’ll have to continue this weekend. While the Irish don’t have the numbers offensively, they certainly have the play-making ability. Hamilton and company will have to limit those abilities if Virginia Tech is to walk away with a victory on Saturday evening.

We still don’t know who Kelly will go to as his starting quarterback on Saturday evening. Does the 11th-year head man go to Wisconsin transfer and the more experienced Jack Coan?

Coan has battled numerous injuries, and is extremely immobile. Or does he go to the recently inserted Drew Pyne? Pyne is a redshirt freshman sure to be on the move when in the ballgame.

Either way, there’s concern with both guys.

True freshman Tyler Buchner could take some snaps as well at the quarterback position. Similar to 2015 with Ohio State’s JT Barrett, Cardale Jones, and the versatile Braxton Miller, the Hokies are going to have to prepare for three separate guys behind center. That’s certainly not easy to do.

The duo has combined for 387 yards on the ground so far this season with four touchdowns.

Tyree also had a 96-yard kick return for a score to begin a string of 31 unanswered points in a thumping of Wisconsin. The explosiveness is certainly there for the former five-star recruit and Thomas Dale High School star.

Tight end Michael Mayer is the one to watch in the passing game for Notre Dame. Of course, Mayer getting the ball depends on the performance of the Fighting Irish front and quarterback.

Kelly’s offensive line has given up a whopping 22 sacks so far this season — one of the worst in the country. If that rate continues on Saturday night, it’s going to be a long evening for whoever is behind center for Notre Dame.

Safety Kyle Hamilton is a stud in defensive coordinator Marcus Freeman’s secondary. Isaiah Foskey has been a force up front, already recording 4.5 sacks on the year. Isaiah Pryor and JD Bertrand also pose a massive threat to that Hokie front with their athleticism at the linebacker position.

That could give Virginia Tech problems if starting tackle Silas Dzansi is unable to do. Dzansi has been battling a foot injury suffered against West Virginia.

It’ll be a tough task, but it’s certainly more of a favorable matchup for the Hokies than many perceive it to be.

Adapt To The Quarterback

If Coan is behind center for Notre Dame, the Hokies should stay with the Jarret Doege approach from when it played West Virginia: Apply pressure throughout the evening, and force the senior to have to move.

If it’s Pyne, drop back. Make the young quarterback make a play with his arm. Tip your cap if he beats you.

The Fighting Irish aren’t going to put long, sustained drives together very often this season. Virginia Tech will need to limit the big play and force Notre Dame to be methodical.

That includes kickoffs. The Hokies must subdue their former coveted prospect Tyree in the kick return game, and limit Williams on the ground. That could be what wins the game for Virginia Tech.

There’s a good chance that it could be a little slick at Lane Stadium on Saturday night.

These two teams played in a blizzard back in 2016, so they’re no stranger to the unordinary.

The Hokies find themselves in a spot where they’re 0-4 in their last four games coming off of bye weeks. Ouch. According to NBC, Notre Dame is 10-1 against opponents coming off a bye week.

It’s really a “pick-‘em”-type game, and that’s what Las Vegas has it at.

Kelly knows how to coach, and his team will be able to handle a hostile Lane Stadium.

The Irish escape Blacksburg with a win in a low-scoring affair.