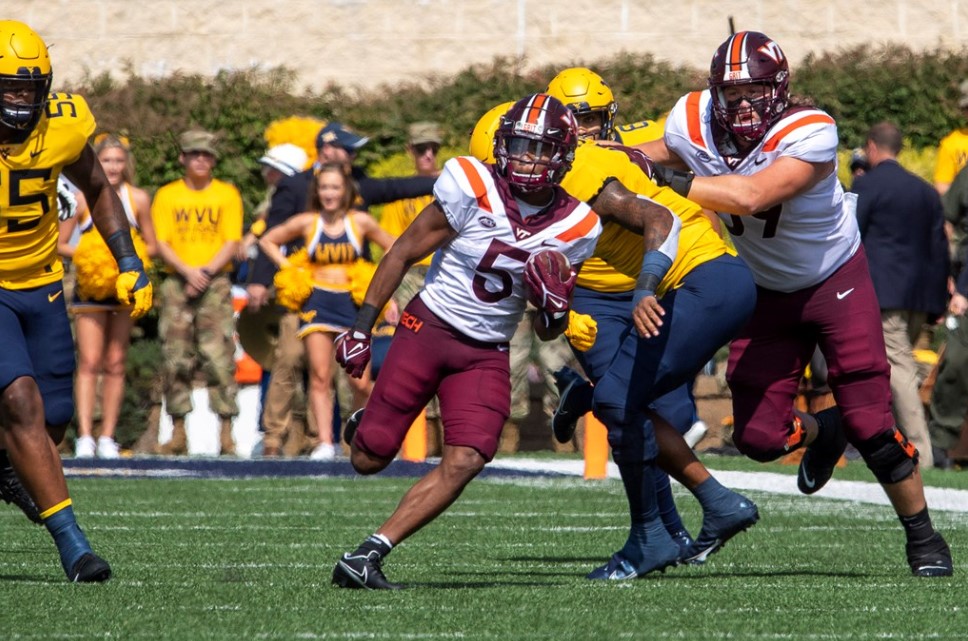 When’s the last time you’ve seen a schedule like this? Front-loaded with home games, back-loaded with road contests. It’s unheard of.

The Black Diamond Trophy may be back in Morgantown, W.V. for the first time since 2003. But the opportunity couldn’t be better for the Virginia Tech Hokies (2-1, 1-0 ACC) to bounce back in the coming weeks.

Lane Stadium won’t have many Saturdays off in the next month, as a four-game homestand kicks off in Blacksburg this afternoon with the FCS Richmond Spiders (2-1, 0-1 CAA) first on the docket.

When “Country Roads, Take Me Home” by John Denver echoes down onto Mountaineer Field, that’s never a good sign for any opponent. Unfortunately for the then-No. 15 Hokies, that’s exactly what they experienced last weekend.

It didn’t take long for Virginia Tech to get punched in the mouth. West Virginia needed just five plays from scrimmage to quickly strike for a 14-0 lead. Virginia Tech’s defense was officially shell-shocked.

Two deep shots, and an untouched 80-yard touchdown run by star back Leddie Brown, and the Hokies were in some early trouble in Morgantown.

Luckily for head coach Justin Fuente and company, quarterback Braxton Burmeister and the offense came back with a nice drive of their own. The Oregon transfer delivered a beautiful throw to Tayvion Robinson in the back of the end zone for a 23-yard score. When Robinson’s foot came down, it was 14-7 in favor of the Mountaineers.

West Virginia kept putting its foot to the pedal however against the Virginia Tech defense. It looked as if it was about to leisurely take a 24-7 lead into the locker room, but Raheem Blackshear had other plans.

Replacing regular kick returner Keshawn King, who didn’t travel due to a non-COVID-19 related illness, Blackshear went 78 yards on the return. That set the Hokies up beautifully from the West Virginia 22-yard-line.

That’s when disaster struck. Two errant throws by Burmeister, a crucial false start penalty, and ultimately a missed 24-yard field goal by John Parker Romo ended what was a deflating first half for Fuente’s team.

Miraculously, the Hokies made this a game. With the help of a shutdown defensive effort in the second half, and the quarterback play of Burmeister, who finished 19-for-31 passing with 223 yard and two touchdowns, Virginia Tech had a shot to win.

Jermaine Waller picked off Mountaineer quarterback Jarret Doege for his third pick in three games with just over two minutes remaining. That set the Hokies up at the West Virginia 17-yard line. The offense got to the 3, but ultimately couldn’t punch it in.

Albeit a tough loss in Morgantown last week for the Hokies, it’s now a picture perfect scenario for Fuente and company.

Here’s how the next five weeks line up for Virginia Tech: Richmond, bye, Notre Dame, Pittsburgh, and Syracuse — all at home.

Fuente will have the luxury of tuning things up against an FCS opponent after last week’s loss. Then he’ll have a bye week to fully prepare for Notre Dame at Lane Stadium on Oct. 9. It’s certainly favorable for Virginia Tech on that front.

It’s a four-game home stand in which the Hokies won’t venture out of Southwest Virginia until Oct. 30 to visit Georgia Tech. It couldn’t come at a better time.

One thing Hokie fans would like to see from Romo is improvement. Certainly the goal is to get in the end zone, but Fuente and staff likely won’t be complaining if they have to use this week as a confidence booster for the Georgia native.

Virginia Tech will also want to see the run game get going after rushing for just a mere 106 yards last weekend in Morgantown. A lot of that had to do with Burmeister getting sacked a whopping six times on the afternoon.

Of course, fans want to see guys like Knox Kadum, Marco Lee, Jaden Payoute, Cole Nelson, and Malachi Thomas to get more reps as well. So that’s something to keep an eye out for if the Hokies jump out to a big lead.

It’ll also be interesting to see how Kaleb Smith builds on his solid performance last week. The Bumpass native was the Hokies’ leading receiver at West Virginia, and he’s got quite the connection to the Spiders. His father, James, was a standout for Richmond in the late 1980’s. His mother, Kimberly, played basketball for the Spiders.

What if we told you, the last time Virginia Tech lined up against the Richmond Spiders, was a year prior to the beginning of the Frank Beamer era?

That’s right. The Hokies haven’t faced this commonwealth foe since 1986 when Bill Dooley still had the reins in Blacksburg. In fact, the last time the Spiders came to town in 1985, they took down Virginia Tech and the Dooley-led Hokies, 24-14.

Richmond may be one of the sleeping giants in all of the FCS. The Spiders won the national championship back in 2008, and have always been a contender in the CAA. But they haven’t qualified for the FCS playoffs since 2016 — a year in which they knocked off Virginia in Bronco Mendenhall’s debut, That remains their last FBS win to date.

They have taken a back seat since then to schools like James Madison, and North Dakota State, but they’re still a program hungry to return to relevance.

Fuente raved about the physicality of the defensive front of the Spiders, who currently are ranked No. 24 in the FCS. Fuente said that there’s enough talent there to play at Virginia Tech. Look out for guys like Tyler Dresser, Kobie Turner, Darius Reynolds, and Ray Eldrige up front.

Richmond’s offense can put some points on the board as well. Joe Mancuso has thrown for six touchdowns and averaged 7.7 yards per completion behind center for the Spiders. Savon Smith and Aaron Dykes possess a solid threat on the ground as well.

Look out for Isaac Brown and Leroy Henley through the air as well. The Spiders will be looking for the ultimate redemption after dropping a heartbreaker to then-No. 9 Villanova last week.

This shouldn’t be treated as a cake walk. The Hokies still have to lace them up. After all, just ask Florida State how things went against Jacksonville State.

The “Keys To The Game” here are going to remain relatively simple.

If you’re the Hokies, don’t show any distinct looks that you may show against a conference opponent later in the season. Don’t play any guys that are fringe on if they’re healthy or not, and don’t just try to make a statement against Richmond. That’s what North Carolina and Notre Dame are for.

It would be nice to see Connor Blumrick get some more looks behind center in a wildcat-like formation. The Hokies however, shouldn’t do anything that may compromise a game plan in the future.

This is the case all the time. But the Hokies are already getting beat up early in the season. Escaping Richmond with a win and staying healthy, will be a perfect scenario for Fuente.

We mentioned this earlier, but wouldn’t it be nice for the field goal kicker to be confident heading into the nitty gritty of the 2021 season?

This is Virginia Tech’s chance to get Romo there: get him a chance to kick when possible. He could use the morale after a shaky start to the 2021 season.

We think you all know where we’re going with this one.

The Hokies shouldn’t have any trouble with Richmond, and any type of that would be extremely discouraging to the fan base.

We expect Virginia Tech to dominate this one like it should. While the Hokies won’t light up the scoreboard, they’ll do enough to secure an easy win.