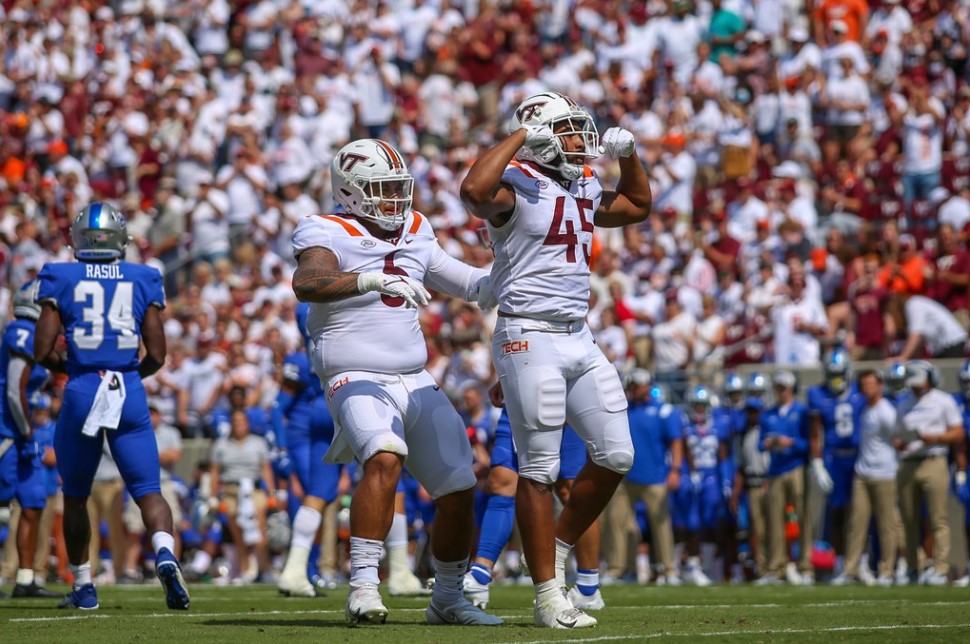 The West Virginia Mountaineers (1-1), who haven’t beaten the Hokies since the old Big East days back in 2003. It may not be Virginia for Virginia Tech, it may not be Pittsburgh for West Virginia, but from a historical standpoint, this rivalry is as good as it gets. 2021 will reignite the Battle for the Black Diamond Trophy — a rivalry that’ll be renewed again next year in Blacksburg.

It wasn’t the prettiest of performances for Justin Fuente and company last Saturday in their 35-14 victory over Middle Tennessee. But at the end of the day, the Hokies did what they had to accomplish, which was to avoid another Old Dominion or Liberty-type catastrophe.

Recent Virginia Tech teams have been vulnerable to such upsets, and after the first half, it looked like it could be a possibility. Fortunately for Virginia Tech fans, the Hokies turned on the jets in the second half to cruise to victory.

Virginia Tech quarterback Braxton Burmeister had a solid follow-up to his victorious performance against then-No. 10 North Carolina. The Oregon transfer went 14-for-24 passing for 142 yards and a touchdown in the winning effort.

That touchdown pass had some significance attached to it as well. Just a mere six plays prior, Burmeister took a bell-ringing shot from a defender. You could hear a pin drop inside Lane Stadium, as the redshirt junior laid lifeless on the 30-yard-line for the entirety of a TV timeout.

Not to worry though, it was a quick trip to the locker room for Burmeister. He connected with Tayvion Robinson in the back of the end zone on his first play back from scrimmage.

Conner Blumrick took some snaps behind center for the Hokies as well. The Texas A&M transfer added a touchdown on the ground and most importantly, a spark in a Quincy Patterson-like run package for Virginia Tech.

The Hokies didn’t show a lot of different looks offensively, or defensively for that matter. But look for Fuente and company to mix things up when they travel to Morgantown this weekend.

It may have been a nice Saturday tune-up for Virginia Tech, but it didn’t exactly escape unscathed.

Star tight end James Mitchell took a blow to the underside of his waist. Unfortunately, it’ll cost Mitchell his season.

The thought-to-be first-round draft pick suffered a season-ending knee injury that required surgery. The team captain could’ve opted to defer for the 2021 NFL Draft back in January, but decided to come back to school to build his draft stock up one final time.

With Mitchell done for the season, it’ll be interesting to see how Fuente and offensive coordinator Brad Cornelsen mix in guys like Drake Deluliis and Nick Gallo, who were behind the Big Stone Gap native. The passing threat there drops significantly, but those are still two capable contributors if properly utilized.

How this affects guys like Tre Turner and Tayvion Robinson is still to be seen. One thing however, is for certain: Burmeister losing one of his top receiving threats certainly isn’t ideal just two games into the season.

It’s been over 6,000 days since the Mountaineers had their hands on the Black Diamond Trophy back in 2003. After three straight wins on the Virginia Tech side, fans in Morgantown believe it’s time to have a say in the story.

Third-year head coach Neal Brown has some program momentum going. The Mountaineers had some modest expectations heading into this season after being picked to finish sixth in the Big 12. A long-awaited win over the Hokies at home could kickstart the rise in Brown’s program.

The Men In Gold

Offensively, West Virginia features one of the most dynamic backs in the country in Leddie Brown, but he’s only put up 104 yards and averaged just 3.3 per carry two games into the season. A lot of that has to do with the downfield blocking though. The Mountaineers possess one of the worst offensive lines in the Big 12, though they do have former Hokie Doug Nester to help up front for West Virginia.

Quarterback Jarret Doege can sling it a little bit under center for Brown and company, but has limited mobility. If Virginia Tech can get to the Mountaineer signal-caller, it may be a long afternoon for West Virginia.

The return game for West Virginia is as dynamic as you’ll find. Kick returner Winston Wright Jr. IS one of the most explosive kick returners in the nation. he averages 51 yards per kick return, and could decide the contest if the Hokies aren’t careful.

The Mountaineers possess a fairly solid unit defensively as well. West Virginia only gave up an average of 21.7 points per game in 2020, and in an era of the lack of a defense in the Big 12, its group certainly stood out. Look for linebacker Josh Chandler-Semedo to be flying all around the field on Saturday afternoon.

After losing a clunker to a shaky Maryland team to kick off the season, this is one the Mountaineers badly need from a program standpoint. Bringing the Black Diamond Trophy back to Morgantown is the only thing on their mind, and doing so could catapult the Brown era as he continues to guide a sleeping giant.

Attack On Doege
The Virginia Tech defensive front has been outstanding when it’s really counted this season. For a West Virginia team that has a weak offensive line, and a quarterback that can’t scramble, the ballgame could be won if the Hokies can continuously pressure Doege.

Beating up on a former teammate in Nester could make it even more satisfying for Virginia Tech.

Punter Peter Moore has had a fantastic season so far for the Hokies. The freshman has booted five of his eight punts for more than 50 yards, and has allowed Virginia Tech to control the field position to this point in the season.

If Moore can continue to use his right leg the way he has in the early stages of the season, and the Hokies can contain Wright in the return game, that creates a huge advantage for Virginia Tech.

Coordinator Justin Hamilton’s defense has been phenomenal overall so far on the young 2021 campaign. In a game that features two teams that won’t light up the scoreboard, this could be one of those contests where a big fumble or interception wins it for either side.

If the Hokies want to be that team; continuing to win the turnover battle is a must if Virginia Tech is to be victorious in Morgantown.

All week, we were leaning on going with West Virginia: at home, packed house, the “Gold Rush”, etc. It’s going to be a fantastic atmosphere. Taking down a top-15 Virginia Tech team would only exemplify that.

In dissecting these teams, the Mountaineers are weak where the Hokies are strong. Look at both lines, look at Doege’s ability to run, look at the turnover margins between both sides.

It’s a toss-up type of game, but Virginia Tech will capitalize on those West Virginia deficiencies and use that to get a hard-fought victory in Morgantown.