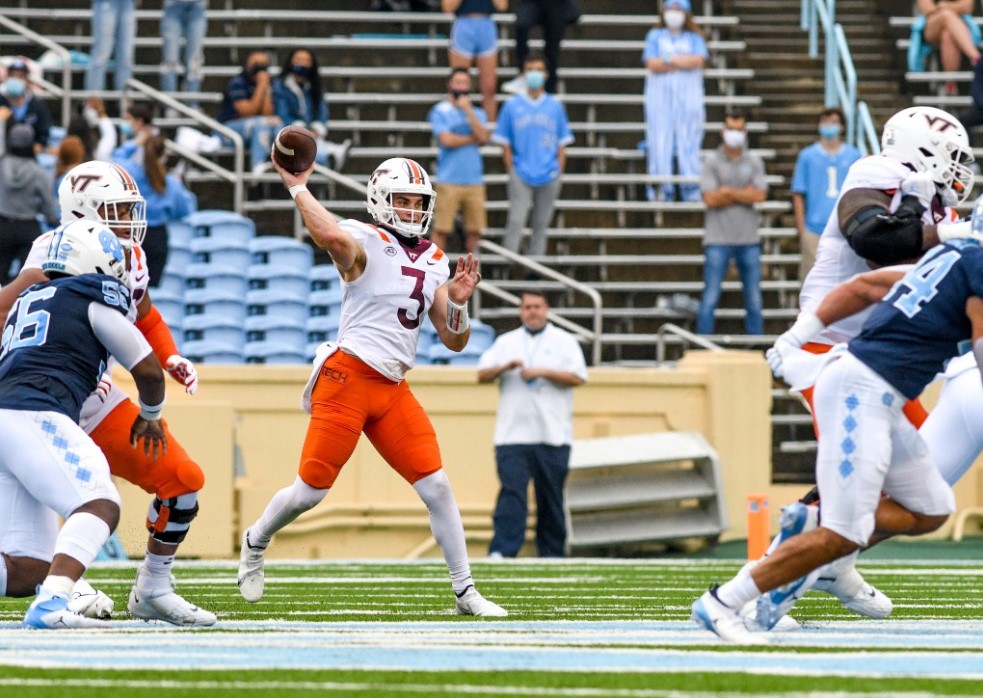 At this time last year, the only reason the general public was permitted into Lane Stadium was to get a skinny little swab shoved six inches up their nose. Now, the 66-year-old venue is back to welcoming 66,000 guests to jump up and down to Metallica’s “Enter Sandman” as the Virginia Tech Hokies prepare to take the field to open 2021.

What better way to reintroduce the iconic tradition than on a Friday night game against the No. 10 team in the country? We can’t think of one.

When the North Carolina Tar Heels roll into Blacksburg on Friday evening to line up against an intriguing Virginia Tech team, it’ll signify to the country that college football, as we once knew it, is finally back. Lane Stadium will certainly do its best to make it feel welcomed.

It’s no secret that Virginia Tech head coach Justin Fuente finds himself on the hot seat after a disappointing 2020 season. A perfect opportunity to hop off of that? Taking down your biggest recruiting rival that has been garnering an unbelievable amount of attention heading into the 2021 campaign. The Hokies have that chance in Week 1.

This isn’t necessarily a game the sixth-year head coach has to win to keep his job. But it will be one he’d like to have to win back a big portion of the Virginia Tech fan base.

Arguably, this is the biggest game of the Fuente era in Blacksburg. How much have the Hokies improved since last season? Can Virginia Tech beat a ranked team at home for just the second time in 10 years? How much has quarterback Braxton Burmeister developed? Those are all questions fans desperately want answers to as we head into a season of uncertainty for Virginia Tech.

Can the Hokies finally make a statement on national television to prove to the country the program isn’t what some perceive it to be? We’ll find out. Let’s get you ready for kickoff with our official pick and preview.

A Glance Around The Board – Offense

Virginia Tech actually possesses quite a solid starting lineup. It’s the depth that’s the issue. What better player to start with than Burmeister? The Oregon transfer is Fuente’s guy behind center, and always has been.

The La Jolla, Cal. native likely would’ve started the entirety of last year had it not been for an offensive lineman stepping on his foot during practice and snapping a chunk of his toes. Burmeister’s quite the athlete. He had the fastest sprint time on the team during fall camp, and can use both his legs and his arm to stifle opposing defenses.

Who’s there for the 6-foot-1, 205-pounder to target? Well, potential first-rounder and tight end James Mitchell leads the way. Tre Turner and Tayvion Robinson sit as Virginia Tech’s top two receivers as we embark on the 2021 season. Kaleb Smith and Jayden Payoute are also set to contribute to a position that quite possibly could be the deepest on the roster.

The running back room will be interesting. The trio of Raheem Blackshear, Jalen Holston, and Keshawn King are all set to get carries in the backfield for Virginia Tech. Blackshear and Holston will likely be the top two following the loss of one of the better backs in recent Virginia Tech history in Khalil Herbert.

The offensive line should be solid as well with guys like Brock Hoffman and Luke Tenuta up front. Though the Hokies aren’t quite as deep there as they have been in years past, especially after the losses of Doug Nestor (West Virginia) and Bryan Hudson (Louisville).

A Glance Around The Board – Defense

It’ll be interesting to see how guys like Devon Hunter, Keonta Jenkins, and Vanderbilt transfer Tae Daley perform in the secondary. Cornerback Jermaine Waller, who hasn’t been fully healthy since October 2019, could also be a difference-maker.

Linebacker Alan Tisdale bulking up from 210 pounds to 228 will be huge in terms of getting after opposing offenses. Chamarri Conner should have the opportunity to shine in the nickelback position after a solid 2020 season.

That group is going to need to have a big day if the Hokies are to pull off the upset. It all starts up front by getting after quarterback Sam Howell.

There may not be another program that currently possesses the momentum that North Carolina does right now: The recruiting rankings, the return of head coach Mack Brown, the hype around a Heisman Trophy-contending quarterback. North Carolina football has not been this hyped in a long time. Now, the Tar Heels have to go out and prove they’re worthy of the praise.

Of course, it starts with Howell. The Indian Trail, N.C. native is likely a top-10 pick in next year’s NFL Draft, and may be the best signal caller to ever suit up in Chapel Hill.

His weapons around him have gone through a little bit of retooling, however. Leading receivers Dazz Newsome and Dyami Brown are now out of the fold. It doesn’t stop there. Two of the best running backs to ever put on the Carolina blue have moved onto the NFL as well in Michael Carter and Javonte Williams.

To the Tar Heels’ credit, they have softened the blow with the addition of Tennessee transfer Ty Chandler as well as the recruitment of top-flight receivers Josh Downs, Emery Simmons, and Khafre Brown. But Chandler averaged just about four yards per carry while in Knoxville, and the Heels aren’t in that category of programs that can just flip the switch and immediately bring in the same type of production.

Top-target Beau Corrales is going to be sidelined as well after suffering a sports hernia injury late last season. It’ll be interesting to see how often offensive coordinator Phil Longo will utilize Howell’s arm strength even without his best red zone receiver.

The entirety of North Carolina’s offensive line will be back as well to protect Howell. 10 of 11 starters return on the defensive side of the football.

This is a very solid Tar Heel team; don’t get us wrong. But there are some deficiencies that teams can take advantage of, especially early in the season.

The single element of this game that could win it or lose it for Virginia Tech, is how Justin Hamilton’s defensive line performs. That may be easy to say, but the Tar Heels gave up a plethora of sacks last season. Making Howell uncomfortable could result in some poor decision making or forcing him to use his legs.

When a team has a player of Mitchell’s caliber available, the answer is simple: use him.

If Burmeister can get the ball to Mitchell and use that to set up the quarterback draw or a deep shot to a speedy Robinson, the Hokies will be able to keep North Carolina off balance.

After all, this is the same defense that gave up 45 points to Virginia Tech just last season down in Chapel Hill.

This sounds basic, but it’s impossible to emphasize enough how badly Virginia Tech needs to jump on the Tar Heels early. Keeping the crowd fully engaged and constantly moving the football will be crucial for the Hokies early on. Oh, and moving the football also keeps the ball out of Howell’s hands.

An opening-drive touchdown would be a welcomed sight in Blacksburg, and can make an already potent offensive increasingly confident with attacking North Carolina the rest of the evening.

If you look down the two-deep for both teams in this Friday night ACC Coastal opener, there really isn’t that big of a talent gap between the Hokies and the Heels. The depth though for North Carolina, is what stands out. That’ll give it an opportunity to wear Virginia Tech down.

Virginia Tech can easily win this game if the players do their jobs in certain areas. But with the momentum going right now for North Carolina, and the difference in trajectories when it comes to both schools, it’s hard to pick against the Tar Heels.

Brown’s team will come into a hostile Lane Stadium and shock the Hokies on a last second-touchdown to leave Blacksburg with a fist-pumping victory.