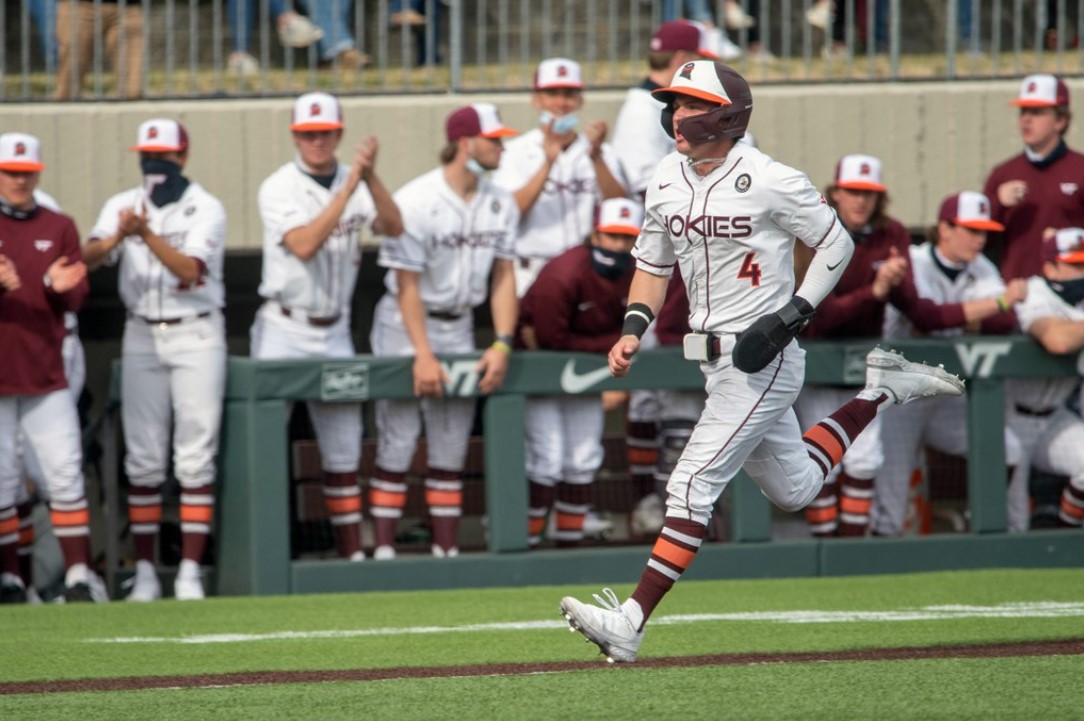 After some thought that the season for No. 13 Virginia Tech baseball could be spiraling out of control, the Hokies proved everyone wrong last weekend with a three-game sweep of then-No. 14 Pittsburgh.

They didn’t just prove fans wrong; they made a statement. The Hokies (13-8, 9-6 ACC) hadn’t won an ACC road series in quite some time and to sweep a top-15 team on the road is quite some flip of the script.

It’s ACC baseball though, which means Virginia Tech will embark on yet another challenge. The Boston College Eagles (12-11, 3-9 ACC) come to town, looking to get back on track after a shaky last couple of weeks in Chestnut Hill.

The series will get started on Thursday and will conclude Saturday with Easter Sunday on the horizon. Some crummy weather in the Blacksburg area on Thursday and Friday will force game times to be moved up.

The Hokies broke out the brooms in the Steel City this past weekend. The first two games weren’t all that competitive, either.

It was a weekend where pitching coach Ryan Fecteau slept quite well with the way his starters pitched. The combination of Peyton Alford, Anthony Simonelli, and Shane Connolly struck out a combined 21 hitters in just 15 innings pitched.

That’s not to mention the team’s strikeout leader coming into last week’s series, Chris Gerard, didn’t pitch after suffering a groin injury the week prior. Alford now leads the team in K’s after his 8-strikeout performance.

Offensively, the combination of Texas Tech transfer TJ Rumfield and Gavin Cross led the way for Virginia Tech this past weekend.

Rumfield combined to go 4-for-11 with four RBIs. Cross, a freshman from Bristol, Tenn., recorded a 6-for-12 weekend with four RBIs that included a no-doubt homer during the seventh inning of the series opener. He also was responsible for four of the team’s five runs batted in on Friday’s victory.

There was no midweek game this past week due to the series opening up Thursday. The Hokies however, have all the momentum they need for when the Eagles land in Blacksburg.

It’s still incredibly early, but according to Baseball America, Virginia Tech right now is a regional host. It would be the school’s first since 2013.

It is currently slated as the No. 16 overall seed in the last slot to host a regional. The participants? Oregon, Georgia and projected Patriot League champion Navy; that’s a pretty tough regional.

“Boston College has traditionally been the hardest team for any team I’ve coached to play in this league,” Szefc said during his Wednesday news conference.

The fourth-year head coach said he personally hasn’t beaten the Eagles in a series since when he was at Maryland in 2013.

Some injury news on the Virginia Tech front: Gerard is questionable to pitch this weekend. A Wednesday throwing session was held to determine his viability. Connolly will likely start in his place if the southpaw from New Jersey is unable to go.

Meanwhile, star utilityman Nick Biddison could return next weekend at Wake Forest. Szefc and his staff are waiting on a final doctor’s appearance before the Glen Allen, Va. native can trot out there after offseason shoulder surgery.

Starting catcher Cade Hunter is also set to miss at least a month as well after suffering a broken hamate bone. Dayne Leonard will continue stepping in.

Here’s how the Hokies project to line up this weekend:

What To Watch For – Boston College

This is a pesky Boston College team, as it always seems. BC has been on a skid of late after starting off the season scorching hot.

The Eagles got on a roll early, taking two of three at then-No. 11 Duke, and continued that momentum at then-No. 25 Auburn. Boston College took two of three from Auburn, including a series finale in which the Eagles rallied from a 9-1 ninth-inning deficit for an 11-9 victory in extra innings.

Since then, it hasn’t been as pretty.

The Eagles have dropped five of six ACC games — all at home. Boston College lost a series to North Carolina, and was most recently swept at the hand of Clemson. The Eagles are also coming off a 12-0 midweek smacking to Connecticut.

Head coach Mike Gambino has done a fantastic job in Chestnut Hill that included a Super Regional appearance in 2016. The former Virginia Tech assistant has gotten high praise from the current head man.

“He does as good a job as any coach in this league,” Szefc said of Gambino.

A lot of the Eagles’ struggles can be attributed to ACC Preseason Pitcher of the Year, Mason Pelio, having a little bit of a down year, but that can change at any given time. Boston College can put up a lot of runs though. The offense is led by a future high draft pick in outfielder Sal Frelick.

Here’s how the Eagles project to line it up this weekend: