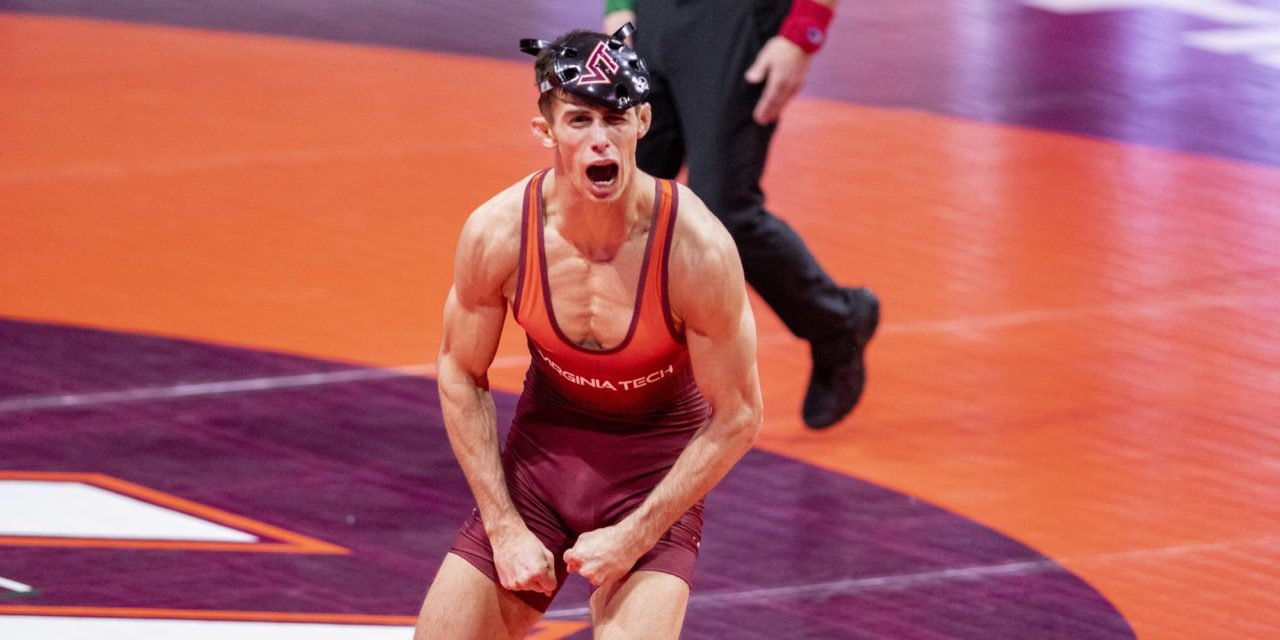 The third-ranked Virginia Tech Wrestling team (9-0, 5-0 ACC) has hit the road for Raleigh, NC, preparing to wrestle in this afternoon’s ACC Championships, and trying to validate their 2021 ACC Dual Meet Title.

Of course, it was a shortened season, but Virginia Tech has some impressive wins. 5 of the 6 ACC teams are ranked in the top 20. The Hokies took care of all of them.

Head coach Tony Robie has done a fantastic job in year 4 as the head man in Blacksburg. He has Tech in prime position to compete for their first ACC Title since 2017-18, as well as a potential Top 4 finish at the upcoming NCAA Championships coming up in mid-March.

Not so fast though – today will be no cake walk for Virginia Tech. They may be the favorite on paper, but #7 NC State is right there with the Hokies. After all, it took until the third criteria to determine a winner in the pair’s regular season dual. Virginia Tech ended up prevailing 17-16 after Tech’s Sam Latona at 125 lbs. recorded a last second takedown and two back points in his match with the Wolfpack’s Jakob Camacho to win the dual meet for Virginia Tech. It was one of the best finishes you will ever see in College Wrestling.

NC State will undoubtedly be the Hokies biggest threat on their home mat in Raleigh. Not much separates the two teams, and the two-time defending ACC Champions have every bit of firepower to beat Virginia Tech.

So what should you expect when tuning in to some wrestling throughout your Sunday?

We take you through each weight class, who’s wrestling for the Hokies, and what’s the most realistic path to an ACC title for Virginia Tech.

The path to an ACC title is simple – the higher each wrestler finishes at their respective weight class, the better chance that team will have to be crowned champions.

The higher a finsher is, the higher the points they recieve. The most points will result in an ACC Championship.

First-round action begins at 11:00 a.m., while the seminfinals start at 1 p.m., followed by consolation semifinals and finals at 3:30 p.m. and 5:00 p.m., respectively. Those will be streamed on the ACC Network Extra. The finals begin at 7 p.m. ET, and will be televised on the ACC Network. The bracket is a double elimination format.

No. 5 Latona (8-0) has had a magical redshirt freshman season for the Hokies, including the highlight of the season with his thrilling win over No. 6 Camacho (7-1), walking-off the dual meet for Virginia Tech against NC State.

As a result, he’s the No. 1 seed at the 125 weight class, but Camacho will be a huge and likely only threat to the Alabaster, AL native, and may be favored by some to win his weight. This could be the weight class that determines the entire championship, which would be epic considering the history of these wrestlers together. The Hokies will bank on Latona defeating Camacho once again to be able to take home the team title.

Seeding At The 125 Weight Class:

This is another weight class up for grabs for a Virginia Tech Wrestler, and one they’d like to get to feel good about their chances to secure the team title.

No. 7 Korbin Myers (6-0) has had an outstanding season for the Hokies. He’ll have to beat top-seeded and No. 4 Micky Phillippi (7-0), who he did not wrestle this season. But other wrestlers in this weight could threaten as well.

Seeding At The 133 Weight Class:

Sam Hillegas (5-3) will take the mat in this weight class for the Hokies.

He’s had a solid season, but this weight is absolutely stacked in the ACC. It’ll be nice if the freshman from Pittsburgh can finish in the Top 3 to qualify for the NCAA’s, but that’s a tall task for the young, inexperienced Hillegas.

He’ll take on No. 17 Cole Matthews (3-4) from Pitt in the first round, who he’s not wrestled this season.

Seeding At The 141 Weight Class:

This is another solid weight class for the Hokies.

But a Top 2 finish and a spot in the NCAA’s very well could be in Andonian’s future. As long as he’s not upset throughout the day, Tech will be in a good position at this weight class.

Seeding At The 149 Weight Class:

Connor Brady (5-4) has really turned it on lately for Virginia Tech.

This one will be a dog fight for the Powell, OH native. He’ll have a good shot to qualify for the NCAA’s considering there’s four automatic bids at 157. No. 2 Hayden Hidlay (7-0) of NC State is elite at the top, but Brady wrestled him close this year, and anything can happen at this weight class for Virginia Tech.

He’ll face off against Tyler Badgett (3-5) of Pitt in the first round, who he majored earlier this year, 12-1.

Seeding At The 157 Weight Class:

This is easily the deepest weight class the ACC has to offer.

Five of the six wrestlers are featured in the top 20, while four are in the top 15.

Defending National Champion No. 4 Mekhi Lewis (8-1) is expected to wrestle for Virginia Tech, as he’ll look to avenge his first ever ACC defeat to No. 6 Jake Wentzel (7-1) of Pitt. But this weight class can go many different ways.

If Lewis wins at 165, which he did in 2019, this will be huge for the Hokies hopes in capturing the ACC crown.

Seeding At The 165 Weight Class:

Dakota Howard (2-4) is another up-and-coming wrestler for Virginia Tech.

He’s coming off the best outing of his college career, a 21-6 technical fall victory of Jared McGill (4-4) of Pitt, who he’ll face in the first round.

Howard can challenge for a third place spot at his weight, if not higher. So this is a spot Robie and company will point to as a weight class where the Hokies can gain another NCAA qualifier and placement points in hopes for the ACC title.

Seeding At The 174 Weight Class:

Bolen will look to repeat as an ACC Champion in a pretty talented weight class. However, his top competitor, No. 3 Trent Hidlay (4-1) of NC State, has never beaten Bolen in his career.

This is another prime opportunity for not only Tech to win a weight class, but take placement points directly from NC State. It’s crucial Bolen comes on top at 184 for the Hokies chances at winning the ACC.

Seeding At The 184 Weight Class:

This is a weight class that has been a roller coaster all season long.

Andy Smith (4-4) has had a decent season at 197 for the Hokies. He took care of the opponents he needed to, and kept it close with ones he wasn’t favored in.

He finds himself as the fifth-seed, though, and could be a couple of upsets away from third place for the Hokies.

He’ll square up against Nick Reenan (5-1) from NC State in the first round this afternoon.

Seeding At The 197 Weight Class:

We’ve reached the heaviest and final weight class for the ACC Championships.

No. 20 John Borst (4-1) was slated to wrestle for the Hokies, but an injury will keep him sidelined. So freshman Hunter Catka (7-1) will get the nod instead.

Luckily for Virginia Tech, Catka can compete. He’ll likely qualify for the NCAA’s, and has a chance to step up big time giving the Hokies placement points at 285.

Seeding At The 285 Weight Class: 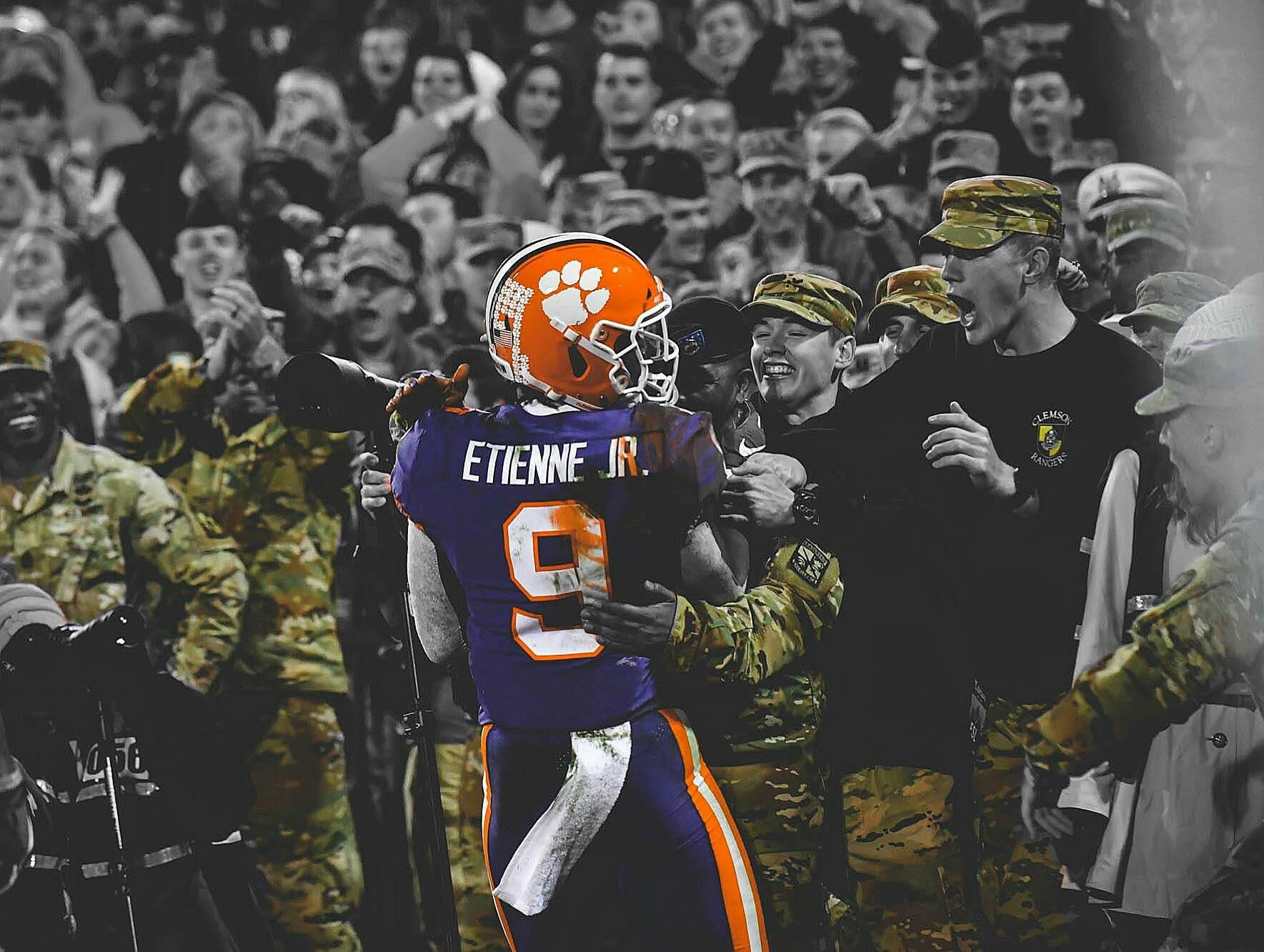 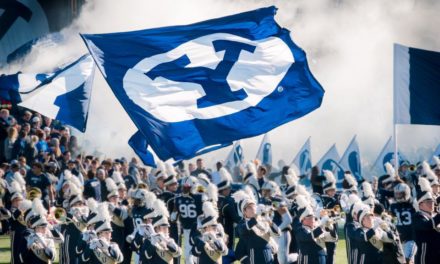 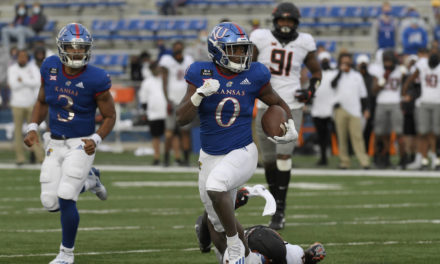 The Triple Option and Why Kansas Should Adopt It