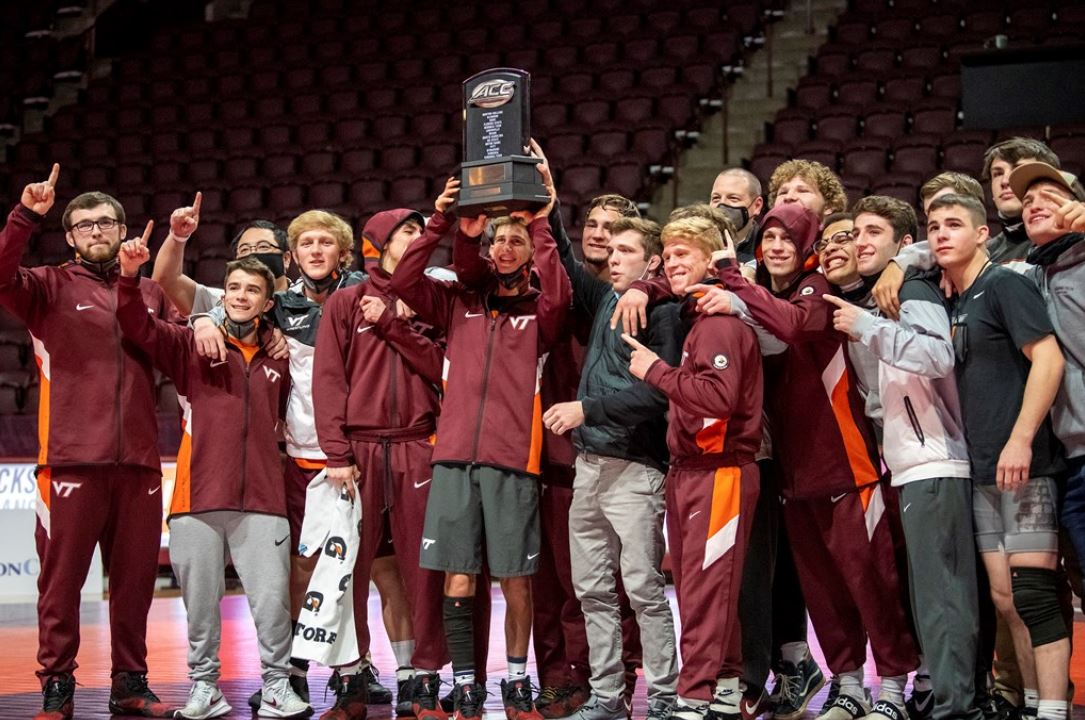 A champion has been crowned in Blacksburg.

Virginia Tech routed the Panthers inside Cassell Coliseum by a final score of 27-12 on Friday evening.

The Hokies finished the regular season at 9-0 overall and 5-0 in the ACC. It’s the first undefeated regular season for Virginia Tech wrestling since 1956-57. Dwight D Eisenhower was in the White House during that time.

Fourth-year head coach Tony Robie however, did not seem satisfied.

“I mean, it was a good season, right?” Robie said. “But this year is just so hard to evaluate.”

“Big picture though, we still have a lot of work to do,” he said.

The former Edinboro wrestling standout said he would address how good of a season it really was for the Hokies after he sees how they fare at the ACC and NCAA Championships.

Reigning ACC Wrestler of the Week and now-famed Hokie No. 5 Sam Latona (8-0) has had a fantastic year at the 125-pound weight class for Virginia Tech. His attitude following the meet however, mirrored that of his head coach.

“It means everything,” the redshirt freshman from Alabama said as he held the trophy. “We still got a lot of goals though; we’re not done yet. We’re just getting started, we’re a young team just out here competing for each other.”

Latona credited Virginia Tech’s “awesome” culture for its stellar season. Latona added that he “had no idea” it was the Hokies’ first undefeated regular season in almost 65 years, but it was “pretty special”.

Dakota Howard (2-4), who had a huge technical fall at the 174-pound weight class, really put this one away for Virginia Tech. When asked about this past season, Howard took a different route, commending his teammates with a massive grin painted across his face.

“The best part honestly is the brotherhood that I’ve built with everyone,” Howard said.

Conner Brady (5-4), another wrestler who dominated his match at 157 pounds, said “it means a lot” to finish the regular season undefeated and to win the title.

“I knew it was coming,” the redshirt freshman from Ohio said. “It’s Team 100 (100th team in school history) and there’s going to be a lot more after this.”

As for the dual that clinched the title for the Hokies, it was Howard’s 21-6 technical fall against Pitt’s Jared McGill sealed the deal for Virginia Tech.

“It felt really good,” Howard said. “This whole week of preparation, I’ve been focusing on more my diet and nutrition.”

“My preparation really helped me out a lot,” he explained. “I’ve been working with (Virginia Tech director of performance) Ty Waltz, Coach Robie, and everyone’s been working with me on my hand fighting to help me get in positions I know I can win at. The whole coaching staff has just been telling me to stay positive and keep it going and keep it moving.”

The other significance with Howard putting on a show, was he avenged then-No. 1 Mekhi Lewis’ (8-1) first-ever ACC defeat. Lewis unfortunately had to forfeit his match to then-No. 10 Jake Wentzel at 165 pounds due to injury default.

After what looked like a shoulder injury during the second period of the match, Lewis tried to continue to wrestle through loads of pain, but Robie eventually pulled him. Howard ran to the locker room immediately after winning the match — presumably to check on Lewis.

Lewis being unable to go would be a big concern for Virginia Tech’s ACC championship hopes.

Following the dual, Robie said he “didn’t know much” regarding Lewis’ injury. The status of the defending national champion remains unknown.

For Latona, coming off a week of high praise wasn’t exactly easy for him coming into this one.

His defeat of then-No. 4 Jakob Camacho of NC State with his last-second takedown went viral. It included the bonus of the ACC Network’s Rock Harrison reacting like a kid in a candy store. Latona was on the top of the college wrestling world. He said he even had to delete social media this week to remain focused and to prevent distractions.

“It was getting to me a little bit,” he admitted. “It was too much…..I just refocused and was like ‘alright, we still got goals; we’re not done’.”

His response? Majoring Colton Camacho — no relation to his former NC State opponent — 12-3, and finishing his regular season undefeated. Latona will be the top seed at 125 pounds heading into the ACC Championships. He credited the coaching staff in Blacksburg for helping him stay focused.

Brady also majored his Pittsburgh opponent, Tyler Badgett, 12-1. He continued the trend of domination for the Hokies over the Panthers all night long.

“I was 0-4 at Cassell Coliseum until tonight,” he chuckled. “It was really rewarding to get a win and just to see all the training I’ve been doing and everything get put together tonight.”

The Hokies may have the ACC dual meet title, but there’s still work to be done.

Virginia Tech will head to Raleigh on Feb. 28 for a chance to compete for another ACC title.

So what’re the Hokies going to do until then?

“We just got to make sure we’re ready to go,” Robie said about his team’s focus. “Right now, it’s fine tuning things; we don’t need to reinvent the wheel.”

“Most of the hay’s in the barn right now. We got a little bit of work to do, but we’ve got to get healthy in some places and just make sure we’re dialed in,” the head coach continued. “I think that’s the biggest thing right now.”

Latona said that he needs to “just keep getting better” prior to the ACC’s.

“(I) just need to keep improving in positions,” he said. “Keep my mental aspect good. Keep my weight good. Stay consistent; not do anything crazy. Keep working, and good things will happen.”

A Buzz In Blacksburg

There’s no question that this team is special.

The confidence is beaming, but there’s no arrogance.

Latona came into the media room carrying the championship trophy, giving a casual “what’s up” prior to answering questions.

“We have something special down here in Blacksburg,” he said. “We have such a close tight-knit group. If you’re not coming down here to win titles, find somewhere else. We’re on a mission and we’re out here to bring it home. We’re out here to be Virginia Tech’s first NCAA championship team. That’s what we’re striving for.”