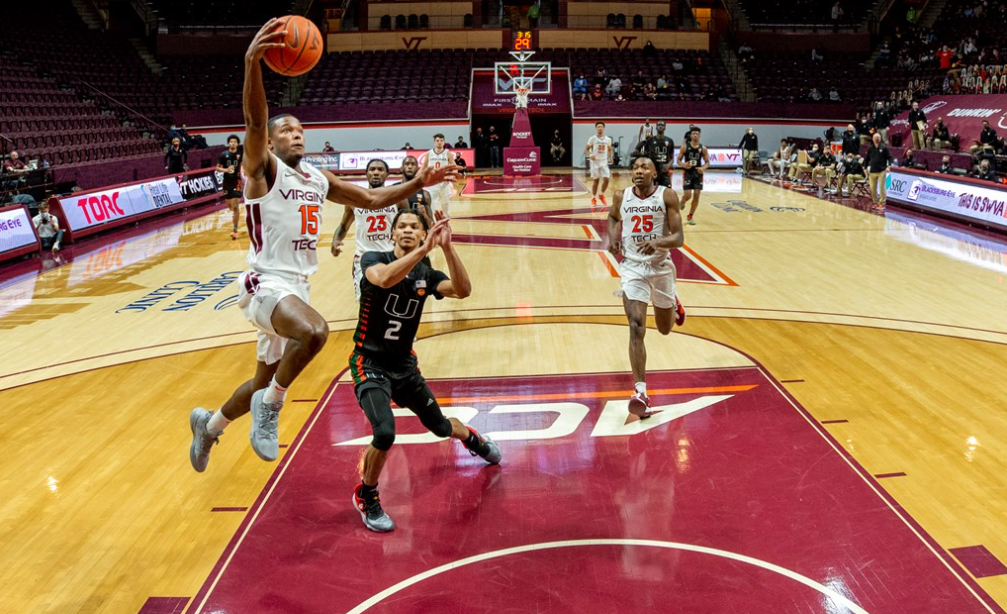 The No. 16 Virginia Tech Hokies will use that brand new Saturday to travel down to South Florida to face the Miami Hurricanes.

The Hokies need it badly, and this is a game they should win. But the Hurricanes have played better of late, and now they’ll hope to avoid a sweep against Virginia Tech and pick off a top-20 team.

Battle At The Beach

Now, Pittsburgh isn’t necessarily a bad loss, but Miami would be. To put it mildly, Virginia Tech needs to stop the bleeding there.

The biggest positive though in the loss to the Panthers? Keve Aluma.

He continued his recent tear, as the Wofford transfer followed up a 29-point performance against Virginia with 30 points and 10 boards for an impressive double-double. He also was responsible Pitt’s Justin Champagnie fouling out and held him to just 10 points. Justyn Mutts had a nice night as well, adding 17 points on his own and six rebounds.

The negative? The Hokies really didn’t get too much out of their guard play. Hunter Cattoor put up a quiet 12 points. Jalen Cone made three early 3s, but that was it for him. Nahiem Alleyne had just four points, and Wabissa Bede did not score.

It was the first game that Virginia Tech really missed Tyrece Radford. Having him all over the court would have taken some pressure on the other guards throughout the night.

Virginia Tech just couldn’t stop the Panthers though in the final half, giving up 52 points and allowing a 13-0 run to happen at the worst time to put the game away.

The good news though? The Hokies are right back at it. They get ready to face off against a Miami team hoping to play spoiler for the second straight game. The Hurricanes knocked off Duke last time out.

The Storm Is Coming

Do you remember Matt Cross? The Canes’ (7-10, 3-9 ACC) leading scorer in the two squads’ previous contest has left the program, with the cited reasoning being that he and the program had, “parted ways.” So there’s one less offensive threat head coach Mike Young has to worry about.

He does have to worry about Isaiah Wong though. Wong put up 16 points in the December meeting, and currently is the team’s leading scorer at 17.3 points per game. He’ll be fired up for this one after his go-ahead three in Blacksburg bounced off the back rim, giving Virginia Tech the victory.

Kameron McGusty will be a threat too for Miami. He averages 11.6 points a game after missing the early part of the season, including at Virginia Tech, with a hamstring issue. Unfortunately for head coach Jim Larranaga, that’s been the Hurricanes’ story all season though. They’ve been without arguably their best player in Chris Lykes for the close to the entire season.

They’ll give the Hokies a game for sure, but can Miami finish out a contest when they’ve struggled to multiple times this season? We shall see.

We expect Virginia Tech to bounce back in this one.

The Hokies can limit the damage of the week by getting out of Coral Gables with a win, and they’ll do just that. Now, it’ll be a dogfight, and it may be more of a nailbiter than Virginia Tech fans want to see. But overall, Virginia Tech will walk out of the Watsco Center with a nice feel-good win.

Following this afternoon’s game, the Hokies will have the entire week off after their scheduled match-up with Florida State was postponed due to virus issues with the Seminoles.

They’ll return to the hardwood next Saturday once again at noon ET.

Virginia Tech will host a long-awaited match-up with Louisville on the ACC Network. The Hokies hope to avenge their first ACC loss of the season and beat the Cardinals for the first time since 1994.