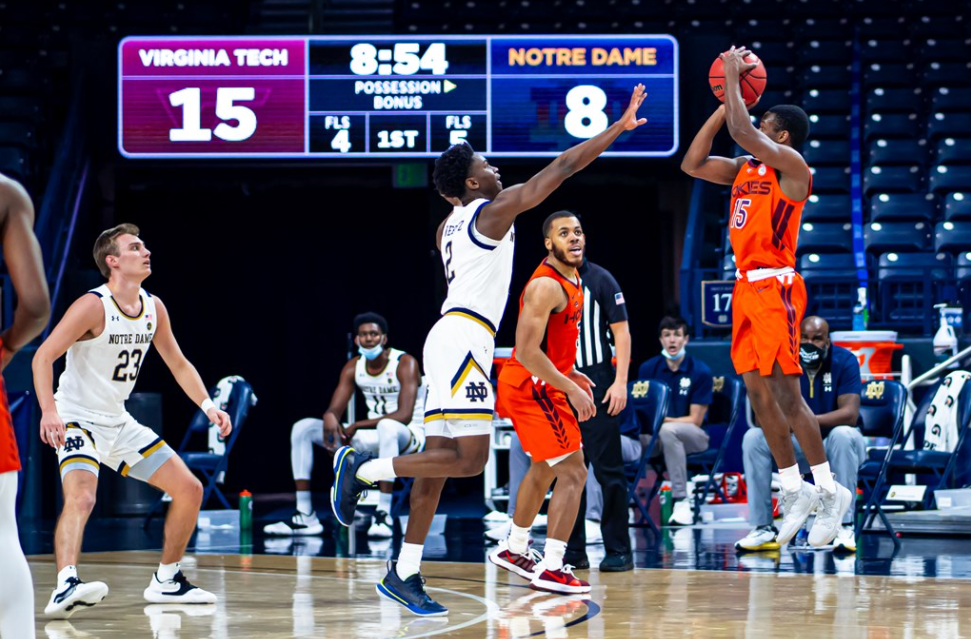 It’s the one we’ve all been waiting for.

Virginia and Virginia Tech. The Commonwealth Clash. A top-20 match-up in prime time from Cassell Coliseum.

This is the one Hokie fans have looked forward to all season long, and after a previous postponement due to a positive COVID-19 test in the Cavaliers’ program, it’s finally time to tip the first of two between Virginia and Virginia Tech.

A Bounce Back Effort

The Hokies look like they belong as a top-4 team in the ACC, and are setting themselves up for a potential No. 7 or 8 seed in the 2021 NCAA Tournament in the bubble in Indianapolis.

They hit a little bumpy road where Mike Young’s team didn’t play to its potential. With Tyrece Radford also being suspended for a DUI charge, that certainly didn’t help matters.

On Wednesday night however, Virginia Tech got back on track. The Hokies took down a decent Notre Dame team on the road, 62-51, putting on a defensive display and holding the Fighting Irish to their lowest point total of the season.

Naheim Alleyne once again led the team in scoring with 15 points, but he had a plethora of guys right there with him.

Keve Aluma bounced back from a couple of shaky games with 14 points, while Justyn Mutts added 14 as well. Hunter Cattoor just trailed those two with 13 of his own. That’s four guys in double figures for Virginia Tech.

The Hokies now face a completely different challenge. Beating the eighth-ranked Cavaliers will be a tall task for Young, who has never beaten Virginia. It will be even tougher now with the Cavaliers clicking on all cylinders.

This is arguably the best match-up in college basketball all day long. We’ll find out so much about Virginia Tech.

The Cavaliers will be waiting on the other side and they’re full of talent that can easily come into Blacksburg and leave with a win for the fifth straight time in the series.

When you think of Tony Bennett and the Virginia Cavaliers (11-2, 7-0 ACC), you think of great defense. While they finally have found the backbone of Virginia basketball, it took some time. Virginia was having offensive outbursts at the beginning of the season, but the defense hadn’t stepped up for the reigning national champions.

An early shocking loss to San Francisco, near overtime upset against Kent State, and a blowout against Gonzaga really had people questioning how good this Virginia team really was. A 7-game win streak later and it has started to answer that question.

It is led by forward Sam Hauser, who leads the team in both points scored (15 per game), and rebounds (7.4 per game). Jay Huff is the name down low that compliments Hauser and makes the Cavaliers such a dangerous team.

There’s so many more names that make Virginia so good.

Rice transfer Trey Murphy III and Kihei Clark are also extreme threats up top for Virginia. They’re the icing on the cake to a potential Final Four contender in 2021.

Virginia Tech will have games where it picks off Virginia over the next few years. Young has them in that position.

But with the way the Cavaliers have been playing, and with the Hokies still trying to figure out their shooting slumps over the last few games without Radford, the advantage is to Virginia.

Virginia will come into Blacksburg and take down the Hokies, continuing to prove itself as the top team in the ACC.

Following the Commonwealth Clash in Blacksburg, the Hokies will travel up to the Steel City to face off in what could be the battle for ACC’s Coach of the Year with Jeff Capel and Pittsburgh.

That game will be this Wednesday, Feb. 3 and will tip off at 7 p.m. on Raycom Sports Networks.