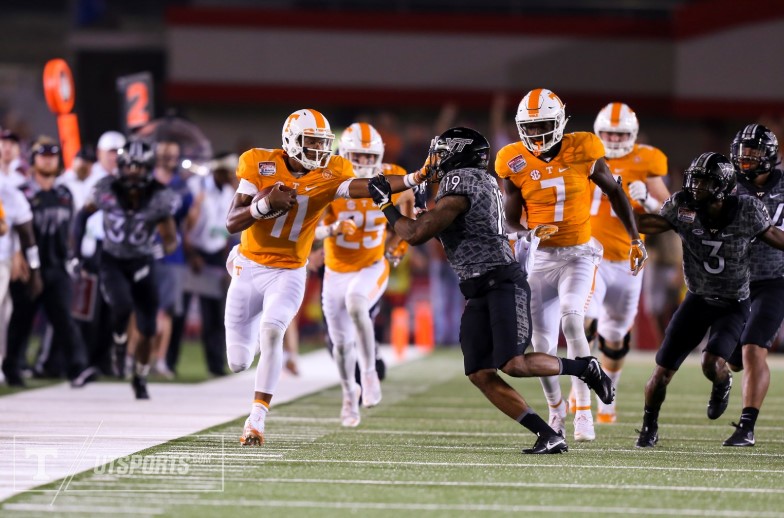 Unknown. That’s the word most players and personnel would describe how the 2020 college football season is shaping up. However, we may be inching closer to a little more clarity regarding details of the season.

We already know the Big Ten and Pac-12 are headed to an all-conference schedule. But what about the ACC, Big 12, and SEC? According to multiple reports, all three leagues, including the ACC, are considering moving to a “10 + 1” schedule (10 conference games and 1 non-conference game). This likely would be put in effect so that rival schools like Florida/Florida State, Clemson/South Carolina, Georgia/Georgia Tech, and Louisville/Kentucky would be permitted to play.

So then that brings up the big question. If the ACC placed this schedule into affect, who would Virginia Tech schedule as its non-conference opponent? We take a look at a few potential options for the Hokies:

The Volunteers are the most logical choice for the Hokies to play. Only 236 miles separates Blacksburg and Knoxville, and with the SEC leaning the same direction as the ACC, this could be a match made in heaven. This would also be a rematch of the 2016 “Battle at Bristol”, where Tennessee handed head coach Justin Fuente his first loss at Virginia Tech in front of 157,000 fans at Bristol Motor Speedway.  Plus, who else wouldn’t want to see the Hokies defend their virtual national championship?

A little Black Diamond Trophy match-up for the Hokies and Mountaineers? Possible, but not likely. As exciting as this match-up is every time the two meet, the schools are set to meet for both 2021 and 2022 — first in Morgantown, before then heading to Blacksburg a year later. It would seem like a last resort for both Virginia Tech athletics director Whit Babcock and West Virginia AD Shane Lyons to schedule each other three years in a row, but don’t rule out this historic match-up yet.

This one could be a bit tricky. While many Virginia Tech fans have been craving this match-up for years (and won’t get it until 2034), the Gamecocks’ cross-conference rivalry with Clemson could prevent a marriage between the two. It is highly doubtful that South Carolina would be able to play both the Hokies and Clemson. If one had to take a guess, the Palmetto State probably wouldn’t approve of South Carolina bypassing Clemson to play Virginia Tech. Although only 264 miles stand between the two schools, the Hokies can likely cross the Gamecocks off the list.

Oh come on. Who wouldn’t want to see Justin Fuente square off against his former team? Likely? No. Fun to think about? Heck yes. The Tigers were a candidate to play the Hokies in the 2018 Military Bowl before Cincinnati was chosen. At the time, Fuente didn’t seem to endorse the idea of playing his former team, stating, “It’s not something I would look forward to.” However, the American Athletic Conference could end up moving to an all-conference schedule. This would eliminate any slim chance of the two schools matching up. But it is still quite an interesting option to think about.

The Flames are likely the most realistic choice on this list. With Liberty originally scheduled to visit Lane Stadium on Sept. 5, all the two sides would have to do is reschedule to a new date. Travel also would be extremely convenient, as Lynchburg and Blacksburg only stand 95 miles between each other. Having a Hugh Freeze-led team come into Blacksburg is exciting to lots of fans. Perhaps the Hokies and Flames could come to an agreement and retain their originally scheduled 2020 match-up.

This is probably the most fun and intriguing school we have on this list. Ever since the Dukes came in and beat the Tyrod Taylor-led Hokies in 2010, this match-up has been talked about for years. What makes this even more interesting, is that JMU will be forced to play as an Independent this year after the Colonial Athletic Association (CAA) cancelled its season and forced the Dukes to schedule on their own.

Since the historic upset, JMU has also developed into an FCS power. The Dukes are the only school to dethrone powerhouse North Dakota State in the past eight years as FCS champs. The likelihood of this match-up probably isn’t the highest. It would most likely only come to fruition if the Hokies couldn’t strike a deal with a Power 5 school. Nevertheless, the idea of the Hokies and Dukes battling it out once again on the gridiron, is certainly attractive to think about.