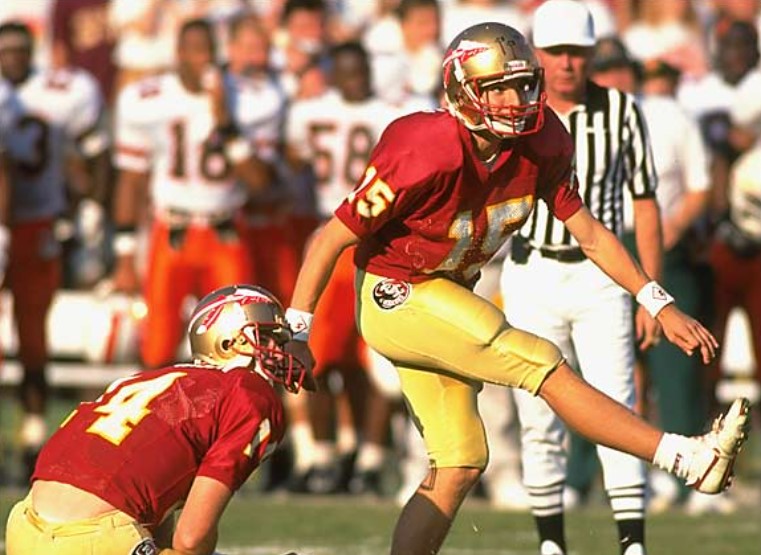 During the late-1980s and throughout the early parts of the 1990s, the annual rivalry contest between Florida State and Miami was one of the biggest games of the season. Unfortunately for fans in Tallahassee, that rivalry was defined by two words: “Wide Right”.

On this day 30 years, the teams met in Tallahassee in a matchup of No. 1 vs. No. 2. A late missed field goal by the Seminoles ultimately decided the contest as Miami escaped, 17-16.

Neither team had suffered a loss as they arrived at Doak Campbell Stadium on Nov. 16, 1991. No. 1 Florida State was a perfect 10-0 and had not played a game decided by fewer than 11 points.

No. 2 Miami was 8-0 with its closest game being a 26-20 win over Penn State. The series however, had recently been dominated by Miami. The Hurricanes had won five of six in the series.

“He Missed it to the Right”

Those kicks however, weren’t the ones that Thomas would be remembered for.

Down nine points, the Hurricanes put together consecutive scoring drives. After a 45-yard field goal by Carlos Huerta cut the lead to six, Larry Jones’ 1-yard touchdown run capped an 11-play drive and put the Hurricanes back in front 17-16 with three minutes remaining.

Once again, FSU appeared in trouble against Miami, but had little trouble moving the ball on its final possession. With Casey Weldon’s arm and Edgar Bennett’s legs and hands, the Seminoles promptly marched inside the Miami 35-yard-line. After a pass interference call on a throw to the end zone put FSU in the red zone, the Seminoles positioned themselves for a winning kick.

Amp Lee’s 1-yard run put the ball at the 17. With 30 seconds to play, FSU was ready for Thomas to come onto the field. Thomas was 3-for-3 on the day, but none of his kicks had come with this much pressure.

The snap was down. The kick was up.

Unfortunately for FSU, it was wide to the right with 25 seconds remaining.

For the sixth time in seven years, the Hurricanes had gotten the better of the Seminoles.

Statistically, FSU held the edge in most categories, including total yards. The difference was that the Seminoles settled for three red zone field goals. All-Americans Marvin Jones and Terrell Buckley each came up with interceptions for the Florida State defense.

Stephen McGuire, who led all rushers with 142 yards, scored on the opening drive to give Miami an early 7-0 lead, but Thomas hit field goals in the first third and fourth quarters. FSU’s only touchdown came in the second on a 1-yard run by Paul Moore.

FSU would lose again to rival Florida two weeks later, but bounced back to beat Texas A&M in the Cotton Bowl to finish 11-2 and ranked in the top five for the fifth straight year. Miami ran the table, finishing 12-0 and atop the AP Poll. Washington won the title in the Coaches Poll.

Late missed kicks by FSU would cost the Seminoles against Miami again in 1992, 2000, 2002 and the Orange Bowl at the end of the 2003 season. The term “Wide Right” first became a dirty word in Tallahassee on this day three decades ago.