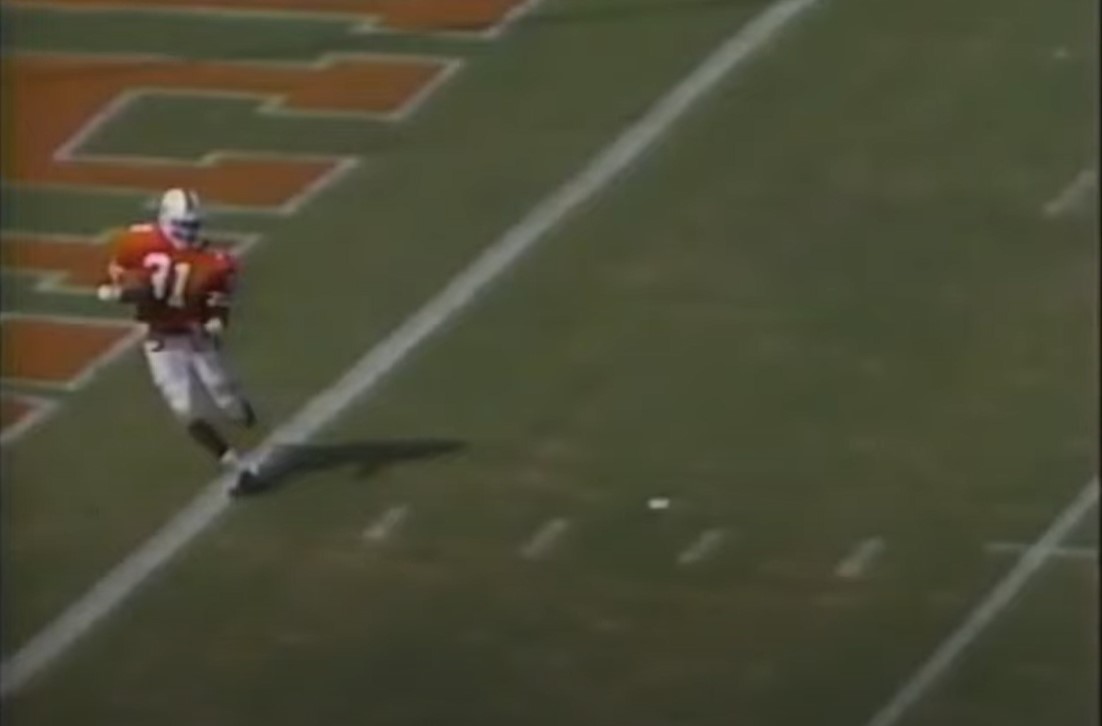 Throughout their histories, Miami and Penn State had met just 13 times. Those contests however, have included some absolute thrillers.

One of those came on this day 30 years ago. In a top-10 match-up, Darryl Williams’ late interception preserved a 26-20 victory for the Hurricanes.

Miami was a perfect 4-0 as it arrived at the Orange Bowl on Oct. 12, 1991. The Hurricanes were ranked second in the country and had defeated their first four opponents by a combined 145-26 margin.

Penn State was 5-1, but on a 3-game winning streak after an early-season loss at USC. Ranked No. 9, the Nittany Lions fell behind early but stormed back to give Miami all it wanted.

What was once a 20-6 lead for Miami was down to just six as the clock ticked under two minutes. To get the lead, big plays were the key for Miami.

Quarterback Gino Toretta threw touchdown passes to Horace Copeland for 80 yards and Lamar Thomas for 42 yards. Elusive Kevin Williams also returned a punt 91 yards for a touchdown. All three of those scores came in the second half after the teams played to a 6-6 tie over the first 30 minutes.

Penn State quarterback Tony Sacca however, wouldn’t allow Penn State to roll over. Sacca finished 24-for-38 passing for 263 yards and a pair of short touchdown passes to Terry Smith.

With the lead down to six, Penn State begin its final drive at the Miami at its own 26-yard-line with less than three minutes to play. The drive reached the Miami 44, but on 4th-and-10, Sacca was forced to heave one out of desperation.

Darryl Williams was there to secure the interception for Miami with 1:04 to go. Williams’ momentum carried him into the end zone. He eventually came out, but went back in. Instead of a safety, Miami was awarded a touchback and proceeded to run out the clock and wrap up the win.

Miami would go on to enjoy a perfect 12-0 season and share the national championship with Washington. The Hurricanes claimed the AP national title while the Huskies sat atop the Coaches Poll.

The loss for Penn State would its final defeat of the year. Penn State closed the year with six straight wins, an 11-2 record and a Fiesta Bowl rout of Tennessee. The Nittany Lions finished third in the poll behind the two national champions.

Miami would play three games in 1991 that were decided by six points or less. The only one at home was a win over Penn State that came on this day three decades ago.