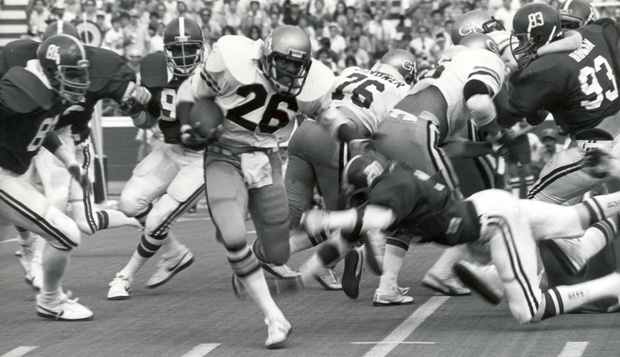 The early parts of the Bill Curry era at Georgia Tech were nothing to write home about.

The Yellow Jackets won just two games over Curry’s first two seasons, but the one that took place on this day 40 years ago will live in program lore for a long time. Georgia Tech used 10 fourth-quarter points to down No. 2 Alabama in Birmingham, 24-21.

After opening the season with a 24-7 win at LSU, Alabama arrived in its home state at Legion Field on Sept. 12, 1981 ranked No. 2 in the country. Alabama had finished 10-2 the year before and were thought of as a national championship contender.

Georgia Tech, on the other hand, was playing its season opener in Birmingham. The Yellow Jackets finished just 1-9-1 in their first season under Curry in 1980 and went 0-5 away from Grant Field. That included a 26-3 loss to Alabama at Legion Field.

Georgia Tech Pulls it Out

Georgia Tech trailed 21-14 after three quarters, but it was clear that the Yellow Jackets weren’t going away. After a 28-yard field goal by Ron Rice cut the lead to four, Georgia Tech went 80 yards on its next drive for the winning touchdown.

After the first two plays resulted in just two yards, Georgia Tech hit its biggest play of the day on 3rd-and-8. Mike Kelley, who passed for 137 yards, went deep for Ken Whisenhunt. The two connected for a 54-yard gain as the ball moved from Georgia Tech’s 22-yard-line to Alabama’s 24-yard-line.

Kelley found Glenn Etheridge for 12 yards on the next play. Three plays later, Robert Lavette scored from two yards out to give Georgia Tech a 24-21 lead with about four minutes remaining.

After a 3-and-out by the Crimson Tide and a Georgia Tech punt, Alabama would hit a long pass play to move inside the Yellow Jackets’ 35-yard-line. On the game’s final play however, kicker Peter Kim’s 50-yard field goal attempt fell short.

Kim did connect on a pair of first-half field goals. Alabama got the scoring started with a 47-yard touchdown pass from Walter Lewis to Joey Jones. The Crimson Tide led 10-0 early, but that lead was only 13-7 at the half, thanks to a 13-yard touchdown run from Lavette.

Georgia Tech took its first lead in the third quarter when Kelley connected with Ronny Cone for a 22-yard touchdown. Down 14-13, Alabama answered on Linnie Patrick’s 4-yard touchdown run followed by a 2-point conversion run by Ken Coley. That would be the final points of the day for Alabama.

Alabama finished with 384 yards of offense to 262 for Georgia Tech, but four turnovers for the Crimson Tide prevented them from putting the game away. The Yellow Jackets turned the ball over just once.

The loss in Birmingham would serve as Alabama’s only defeat of the regular season. Alabama went 8-0-1 the rest of the way and perfect in SEC play to share the conference crown with Georgia. The Crimson Tide finished the season ranked No. 7 after a 14-12 loss to Texas in the Cotton Bowl.

For Georgia Tech, the upset would serve as its only win of the 1981 season. Curry would beat Alabama just twice in seven years at Georgia Tech before becoming the Crimson Tide’s head coach in 1987. The most shocking of those two victories over Alabama came as a 24-point underdog on this day four decades ago.