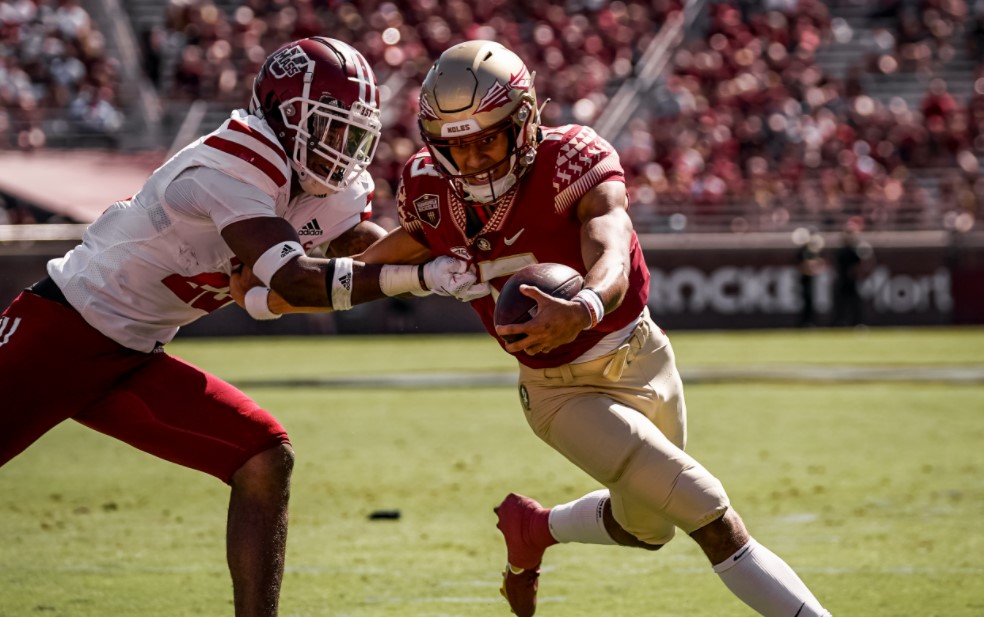 Spring football is just a couple of months away. Soon, position battles will commence and a true depth chart will begin to form.

One Florida State player in particular is looking to build off of a year in which he showed growth, but needs to continue developing to keep the starting job. That player is quarterback Jordan Travis.

Head coach Mike Norvell and quarterbacks coach Tony Tokarz have made it clear Travis will be the guy for the 2022 season. However, blue-chip freshman quarterback AJ Duffy is already turning heads.

In order to get a clearer indicator of Travis’ ability, we can take a look at his performance from last year. From there, it’s an educated guess on potential improvement with another full offseason.

The fourth-year sophomore got to play two horrid defenses last year as FSU took on Massachusetts and North Carolina.

Against dead-last Massachusetts, Travis had some serious miscues by his receivers. Drops accounted for a handful of chunk plays, but he made up for it with his legs.

He finished the game with a Pro Football Focus (PFF) grade of 68.3 and an NFL passer rating of 95. His 123 passing yards was an uninspiring stat, but he also posted nine carries for 78 yards and a touchdown.

North Carolina’s 97th-ranked defense is a bit of a head-scratcher, because Mack Brown simply cannot figure out how to defend a mobile quarterback. Nevertheless, Travis did take advantage of the Tar Heel defense. Consistent short fields kept the yards low and the scoring high.

Travis posted 145 yards and three scores through the air with another 121 yards and two touchdowns on the ground. His PFF grade of 93.3 and NFL passer rating of 152.7 were both season-highs.

The majority of FSU’s opponents fell into the “average to above average” category defensively, and the results are inconsistent.

Coming in with the 64th-ranked defense was Boston College. The Eagles struggled to defend FSU’s passing game. Travis earned a PFF grade of 85.4 with an NFL passer rating of 111.3. He tallied 251 yards and three touchdowns through the air, adding 26 yards on the ground.

Against Syracuse’s 56th-ranked defense, Travis was extremely limited in the passing game. However, his legs were the key to the Seminoles’ game-winning drive. He posted a PFF grade of 74.9 and an NFL passer rating of 84.2 in FSU’s first win of the season.

His stats showed the struggles in the passing game, with only 131 yards through the air with two touchdowns and an interception. He also added 113 yards on the ground.

Miami’s defense ranked 53rd, just ahead of Syracuse. Travis was dialed in for this one, posting a PFF grade of 85.4 and an NFL passer rating of 99.4. His 274 passing yards were a season-high. Travis added 62 yards and two scores on the ground.

Last in the average category is Florida, whose defense ranked 43rd on the year. This was one of Travis’ better games stats-wise, but he performed poorly in terms of efficiency.

The Seminoles faced two extremely good defenses on the year in Clemson and Notre Dame.

Notre Dame’s 13th-ranked defense gave Travis fits in the season opener. He threw as many interceptions (3) in one game as he did the rest of the season.

He only accumulated 130 yards with two touchdowns through the air, and he was extremely limited on the ground with just nine yards rushing and one score. His performance earned a 61.6 PFF rating along with a season-low NFL passer rating of 65.6.

The third-ranked Clemson defense presented a true challenge. Defensive coordinator Brent Venables took away easy reads and limited the quarterback run. Aside from a wild 75-yard catch-and-run by Lawrance Toafili, the Seminole passing game was nonexistent.

Travis finished the game with 188 yards and two touchdowns, but averaged only 8.8 per attempt. He took 16 carries on the ground for a negative-4 yards. His PFF grade against the Tigers was a season-low 58.1 with an NFL passer rating of 121.

There are some glaring deficiencies in Travis’ quarterback game, but none that are not fixable. He needs to improve his pocket presence to allow himself to comfortably make reads while climbing the pocket.

He also needs to continue to work on accuracy and ball placement, as his rollercoaster of a PFF chart shows inconsistency. If he can improve those two aspects of his game, the sky is the limit.