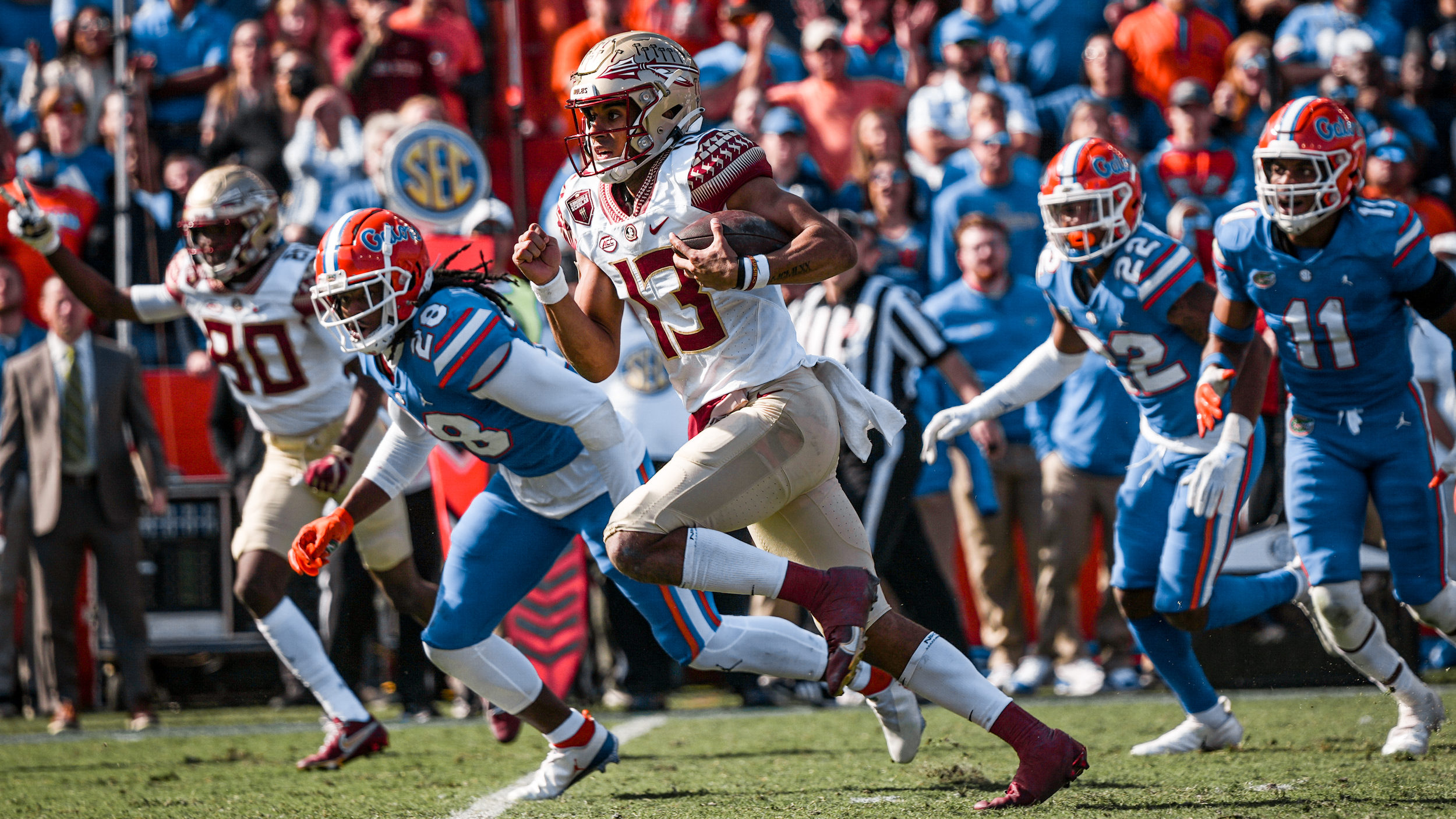 The ‘Noles have fallen just short of a bowl bid.

The rollercoaster season has finally come to a close as rival Florida delivered Florida State a 24-21 loss in Gainesville.

This loss brings FSU’s final record to 5-7 — a failure, perhaps, for fans’ expectations, but a relative success after starting the season 0-4. FSU fans can now look forward to recruiting season and begin building hope for a successful 2022 season.

The Seminole defense played lights out for the first half, but the offense could not find any traction. A lone rushing touchdown from nine yards out by quarterback Jordan Travis was the only score FSU could muster.

This ineptitude came in the form of an injury to Travis’ arm, forcing backups McKenzie Milton and Tate Rodemaker into action for a large portion of the first half.

Meanwhile, Florida State’s defense held the Gators to a lone opening drive touchdown. The secondary picked off Emory Jones three times to keep the Noles in the game. If FSU’s offense could have capitalized, the score could have been very different. Instead, the two teams entered the half tied at seven apiece.

The Gators dominated the third quarter as FSU’s offense continued to sputter. Emory Jones was pulled from the game in favor of backup quarterback Anthony Richardson – and Richardson was efficient. However, the promising backup wasn’t needed much, as the Gators leaned on their run game. Florida marched down the field twice, scoring a field goal and a short touchdown pass to bring the score to 17-7. A three-yard rushing score by running back Dameon Pierce effectively put the game away as Florida went up 24-7.

FSU wasn’t done quite yet. The Noles went up-tempo in the fourth quarter and found success. FSU put together a seven-play, 71-yard drive that ended with a 19-yard touchdown run by running back Treshaun Ward to cut the score to 24-14.

After trading punts, Florida State’s offense marched 92 yards down the field and brought the score to 24-21 as wideout Ontaria Wilson high pointed the ball just inside the end zone. The Noles may have cut the lead to just three points, but the drive burned so much time off the clock that FSU needed an onside kick recovery.

Almost comically, kicker Parker Grothaus grazed the ball with his foot and it fell flat on the ground. It was ruled an onside kick with illegal touching, and the Gators kneeled the ball down to end the game.

Offense – Jordan Travis: Everyone watching got a glimpse of just how anemic FSU’s offense is without Jordan Travis at the helm. The sophomore quarterback left with an arm injury, but returned to lead a comeback bid that likely would not have happened had he sat the rest of the game. Travis completed 18 of his 29 passing attempts for 202 yards with one touchdown and one interception. He added 102 yards rushing on 17 attempts along with a score on the ground.

Defense – Jammie Robinson: South Carolina transfer Jammie Robinson continues to be one of FSU’s most consistent defensive backs. After being ejected from the previous game against Boston College, Robinson led the team with 18 total tackles. He also tallied 1.5 tackles for loss and an interception. Robinson finishes the season as FSU’s leading tackler.