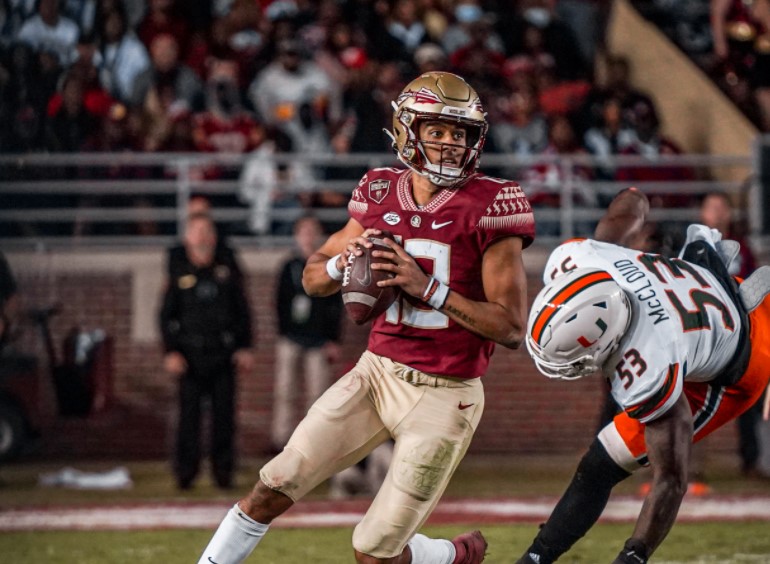 Florida and Florida State are not the programs that once battled for national championships on a yearly basis, but the rivalry is just as fierce.

This season has resulted in an odd set of circumstances for both teams. Florida State lost four straight to begin the season, but has found traction and plowed ahead, winning five of its last seven.

Florida, on the other hand, was ranked 13th to begin the season. After ascending into the top 10, the Gators dropped four straight games to Power 5 opponents.

As a result, both teams find themselves at 5-6 with bowl eligibility on the line.

Florida leads the all-time series 36-26-2 and is hoping to extend a two-game winning streak against the ‘Noles. Their last matchup resulted in a 40-17 shellacking by the Gators in 2019.

Florida State’s offense continues to hum with Jordan Travis at the helm. Last week, he passed all over a very good Boston College secondary to the tune of 251 yards and three scores.

The Seminole rushing attack put up another performance of over 100 yards as well. FSU’s offense still dropped from 51st to 58th in ESPN’s SP+ rankings, largely due to its second half struggles.

Florida’s defense is a good matchup for the Seminoles. The run defense is porous, giving up over 150 yards per game on the ground.

In fact, the Gator defensive performance this season has been so subpar that defensive coordinator Todd Grantham was fired. They are currently ranked 42nd in the country under interim defensive play-caller Christian Robinson.

The ‘Noles are going to have trouble stopping this Florida offense. The Gators are averaging over 200 rushing yards and 260 passing yards per game. Florida currently boasts the 14th-ranked offense in the country.

The Seminoles have two major keys going for them in this one, however.

For starters, Florida head coach and offensive play-caller Dan Mullen was fired this week. Running backs and special teams coach Greg Knox is taking over as the interim.

Secondly, the Gator offensive line has struggled mightily this year. Florida State’s elite defensive line should have no issues dominating the entirety of this matchup.

Mike: Florida, 31-27. The fact that many seem to be counting Florida out should let FSU know that it cannot take this game lightly. For the Seminoles to have a chance, they must play mistake-free and the defensive line must dominate. For some reason, I expect a strong offensive showing from the Gators.

Cory: Florida, 31-28. I am a man of my word — not predicting FSU to win a game since I got burnt early. And just like BC, I really hope I’m wrong here. I hope Florida is completely done with the season just as it was in 2010. Can FSU pull this off and go bowling? Absolutely. Could FSU get hurt, retreat into its shell, and look horrible? Absolutely. Color me cautiously hopeful.