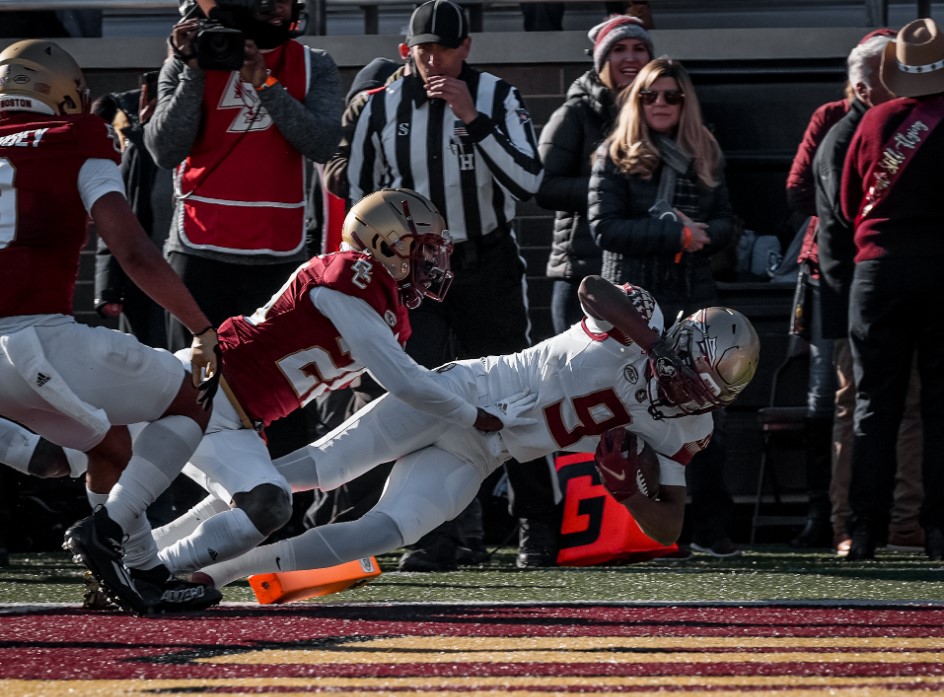 Florida State keeps finding a way to make games close. This time, the Seminoles pulled off the upset against ACC opponent Boston College, 26-23.

FSU was able to win Saturday’s matchup, thanks to stellar play from quarterback Jordan Travis, as well as an incredible performance by the defensive line.

After losing four straight to begin the season, head coach Mike Norvell’s Seminoles have won five of their last seven.

Defensive ends Jermaine Johnson II and Keir Thomas showed up to do just that. The two accounted for seven quarterback hurries and two sacks.

Even when they weren’t sacking the quarterback, the duo was making their presence known with big hits. By game’s end, Jurkovec was thinking twice before scrambling.

In addition, Florida State’s secondary had a good day. Between the secondary playing well and the defensive line playing lights out, Jurkovec was only able to complete 42% of his 24 passes for just 148 yards, with one touchdown pass and an interception. He added a rushing touchdown.

The prolific quarterback was coming off an incredible game against Georgia Tech in which he posted nearly 400 all-purpose yards and five total touchdowns.

In a game script that had FSU fans seeing double after the Miami victory, Florida State rocketed out the gate to take a 26-3 lead. However, adjustments by Boston College and some atrocious officiating put the heat on the ‘Noles.

The Eagles were able to score 20 unanswered points and were in position to win the game. However, FSU’s defense was not going to lay down and give up a win.

An incredible effort by the Seminole defensive line stopped the Eagles cold, and an errant pass by Jurkovec on 4th-and-9 was intercepted by defensive back Akeem Dent. The ‘Noles were able to run the clock down and win the game by simply holding onto the early lead.

This win puts the Seminoles that much closer to making a bowl, with only one must-win game remaining on the season. That comes on Saturday at Florida.

Offense – Jordan Travis, QB: Travis continues to polish his passing ability as the season progresses. He has become comfortable with controlling the offense, and has showcased his knowledge when it comes to audibles. The dual-threat sophomore completed 20 of his 34 passing attempts for 251 yards and three touchdowns. His effort earned him a passer rating of 150. In addition, he added 26 yards rushing and was only sacked twice.

Defense – Keir Thomas, DE: Jermaine Johnson II has deservedly garnered a lot of praise this year, but his counterpart has been quietly dominating his side of the defensive line. Thomas simply could not be blocked in this one, hurrying the quarterback five times and sacking him twice. He could have easily had two more sacks, but Jerkovec was able to toss the ball away as he fell to the ground. Thomas also tallied seven total tackles, three of which resulted in a loss.