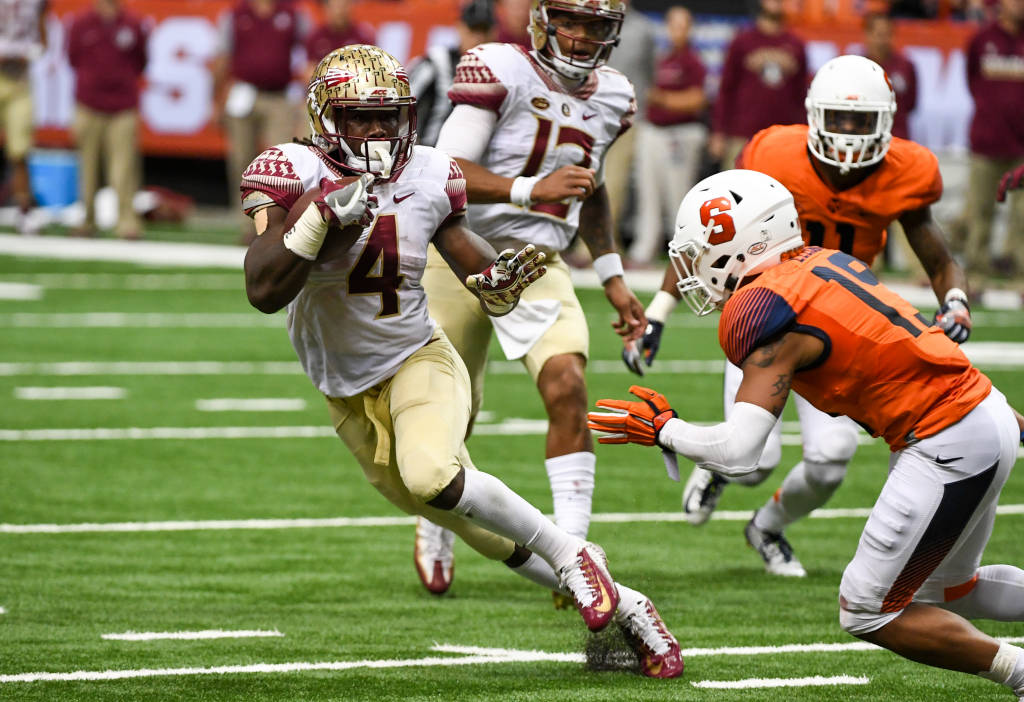 Florida State has had a number of players become legends over the last 50 years. When it comes to rushing however, Dalvin Cook stands alone.

On this day five years ago, Cook cemented his place in FSU history. He broke the career rushing record previously held by Warrick Dunn in a 45-14 rout at Syracuse.

Cook needed just 19 yards to break Dunn’s all-time record as the Seminoles arrived at the Carrier Dome on Nov. 19, 2016. FSU was 7-3 on the season, ranked No. 17 and looking to close ACC play on a high note.

Syracuse was just 4-6 and needed to win to keep its bowl hopes alive. Thanks largely to Cook, those hopes were quickly put to rest.

Needing just 19 yards, it didn’t take long for Cook to break the FSU career rushing record. It however, didn’t come on the opening drive.

FSU’s opening drive culminated in a 16-yard touchdown pass from Deondre Francois to Nyqwan Murray, but Cook carried just once for five yards. His second carry would be the record-breaker.

With the Seminoles up 7-0, Cook’s second carry went for 41 yards as he found a hole before hitting the sideline. As he was pushed out of bounds in the red zone, the South Florida native had become FSU’s all-time rushing leader.

The drive culminated in Francois finding Travis Rudolph for a touchdown, but Cook was just getting started. Cook would score the next four touchdowns for the Seminoles in the rout, finishing the day with 225 yards rushing. Cook scored on runs of 25, 11, 17 and eight yards.

As a team, FSU finished with 654 yards of offense. Francois also passed for 315 yards in the victory. Syracuse’s only two touchdowns came on passes from quarterback Zack Mahoney.

Cook and FSU would finish the 2016 season on high notes. After his monster performance against Syracuse, Cook wound up tallying 386 total yards in wins over Florida and Michigan in the Orange Bowl to close the season.

FSU would finish with a record of 10-3 and in the top 10. Cook, then a junior, would declare for the NFL Draft following his Consensus All-American season, finishing with an FSU record 4,464 yards rushing. He ascended to the top of the school’s all-time rushing list on this day five years ago.