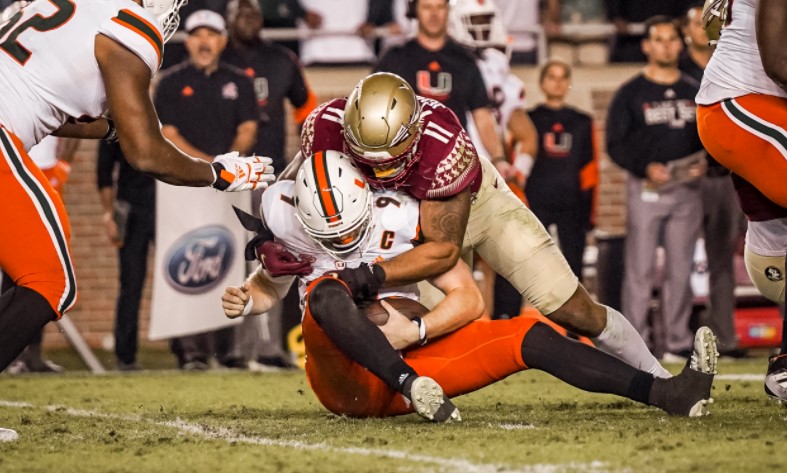 Florida State snapped a 4-game losing streak to a rival, sent its seniors out as winners and scored a huge victory on Saturday at Doak Campbell Stadium.

After leading by as many as 17 points, FSU needed a quarterback sneak from Jordan Travis for the game-winning touchdown with 26 seconds left as the Seminoles rallied past Miami, 31-28. The victory is the first for FSU over Miami since 2016.

With the win, FSU improves to 4-6 and keeps its bowl hopes alive. To highlight the Seminoles who stood out on “Senior Day”, the Fifth Quarter staff of editors Mike Ferguson, Cory Thorpe and lead writer Jake Bunting hand out this week’s game balls:

Unanimous Game Ball: Jordan Travis, QB
In his first start against rival Miami, Jordan Travis was the best offensive player on the field for FSU. Travis finished 18-for-26 passing with a career-high 274 yards. Travis also rushed for 62 yards and two touchdowns, including the 1-yard game-winner with 26 seconds left. He added a 2-point conversion to cap the scoring.

Unanimous Game Ball: Jermaine Johnson, DE
Jermaine Johnson will play just one season at FSU, but he’ll be able to say that he never lost to Miami. On Saturday, Johnson had an afternoon to remember. The Georgia transfer finished with seven total tackles, five for loss and three sacks. He also forced a fumble on a sack of Miami quarterback Tyler Van Dyke that FSU recovered. The Seminoles ultimately cashed in with a Jashaun Corbin touchdown.

Mike’s Game Ball: Alex Mastromanno, P
Alex Mastromanno didn’t have his typical stellar game, but did a good job of keeping Miami pinned deep. The Australian punter averaged just shy of 40 yards per punt on five punts and had two downed inside the 20-yard-line. The Hurricanes managed just one return for seven yards.

Jake and Cory’s Game Ball: Ryan Fitzgerald, K
Although he missed badly on a 52-yard attempt, Ryan Fitzgerald had an overall solid day for the Seminoles. Fitzgerald was 3-for-4 on field goals with makes of 22, 27 and 29 yards. The three makes is a career-high for Fitzgerald. He was also 2-for-2 on PATs.