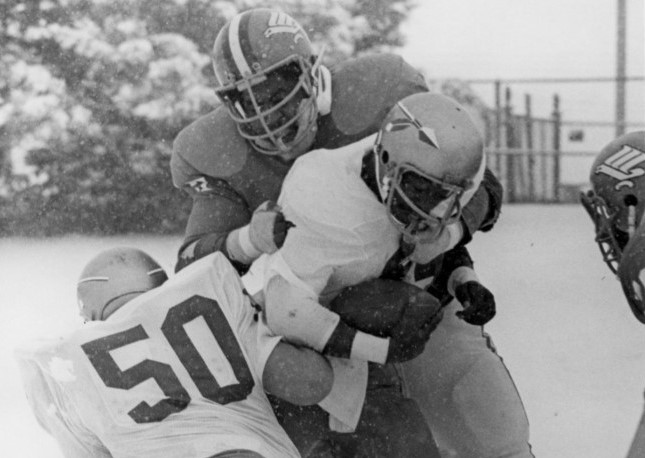 For legendary Florida State head coach Bobby Bowden, his first season would be the only losing campaign of his illustrious career.

Still, that season had some memorable moments. One of those came on this day 45 years ago.

On a snow-covered field, FSU used a late touchdown and 2-point conversion to emerge victorious over North Texas State, 21-20.

The Nov. 13, 1976 contest featured two head coaches who would go on to become legends. The aforementioned Bowden led the Seminoles into Denton, Tex. with a record of just 3-6.

On the other sideline was fourth-year head coach Hayden Fry. After a 2-3 start, Fry had coached the Mean Green to four straight victories as they arrived with a record of 6-3. As time ticked away on a snow-covered field, Fry’s North Texas State team was clinging to a touchdown-lead.

Early in the fourth quarter, it appeared that the Mean Green were on the verge of putting the game away. Up 20-13, they had the ball on the FSU 7-yard-line. The Seminoles buckled down on defense to force what appeared to be a field goal attempt. Instead the holder was unable to get the ball down and the deficit remained seven.

FSU proceeded to march into North Texas State territory, but Jimmy Black’s pass to the end zone was intercepted by J.T. Smith. After a North Texas State punt, FSU began the decisive march at its own 31-yard-line.

Black atoned for the earlier turnover with key passes on the drive to Jeff Leggett, Mike Barnes and Jimmy Key. On 3rd-and-5 from the Mean Green 7, Leggett carried the ball into the end zone to pull FSU to within one with 2:13 to play. After a timeout, Bowden elected to keep his offense on the field.

The decisive 2-point conversion would be a pass, but not from Black. Instead, he pitched the ball back to Key, which indicated a run. Key however lobbed one into the end zone to a wide open Kurt Unglaub for the go-ahead score.

The final drive for North Texas State would reach the FSU 39, but two sacks on the final three plays sealed the win.

With the contest knotted 7-7, FSU took its first lead early in the third when Black and Unglaub connected for a 91-yard touchdown. The Seminoles had momentum, but not for long.

A missed extra point kept the lead at six before the Mean Green answered with touchdowns on back-to-back possessions. After Mike Jones rushed for a 1-yard touchdown, Washington found David Ray for a touchdown pass. A missed PAT however, kept the lead at seven.

FSU outgained the Mean Green 343-224 on the afternoon. Unglaub led all receivers with four catches for 128 yards. Key led the FSU ground attack with 89 yards on 17 carries.

FSU would close the year with another thrilling win by beating Virginia Tech and finishing 5-6. North Texas State would go on to beat Drake 63-0 in the season finale to finish 7-4 for the second straight season.

The contest wouldn’t be the last between Fry and Bowden, who would both go on to become members of the College Football Hall of Fame. The Seminoles handed the Mean Green their only loss the following season in Tallahassee.

On a snow-covered field however, the 1976 contest between the two future legends was the most memorable. It remains one of the coldest games in FSU football history. It came on this day 45 years ago.