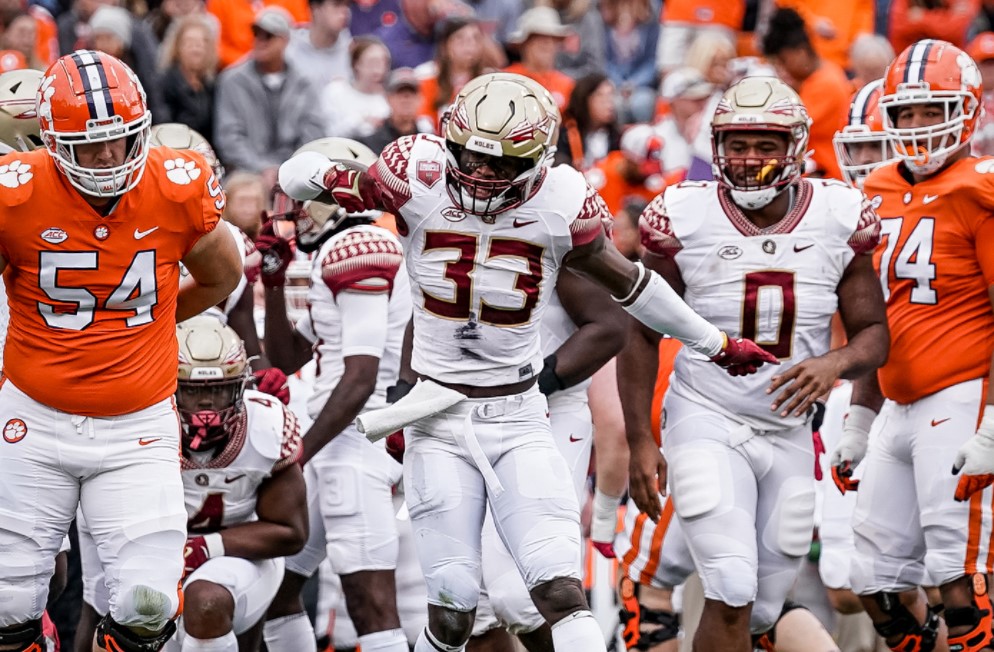 The Seminoles are currently 3-5 and need to win three of their remaining four games to become bowl eligible.

The ‘Noles face a huge challenge with a home date on Saturday against a North Carolina State team that is in the hunt for its first ACC Atlantic division title.

Florida State leads the all-time series 26-14. Their last meeting was in November 2020, which saw the Wolfpack run away with a 38-22 victory as quarterback Jordan Travis was unavailable to play.

Clemson gave future teams a recipe for success against the Seminole offense: Load the box and force Jordan Travis to hit the intermediate passes that open up. On passing downs, rush three and put a spy on Travis.

If your team has the athletes to cover in space, the ‘Noles are not going to have success through the air. Florida State’s offense managed no points over the final nine drives against Clemson.

Fortunately for FSU, the 13th-ranked Wolfpack defense is not quite as good as Clemson’s fourth-ranked squad. However, NC State still has athletes. Travis is going to have to hit on passes to win this game.

The Seminole offense fell in ESPN’s SP+ rankings after failing to produce against Clemson’s elite defense. The ‘Noles fell 16 spots to 35th after last week’s showing.

This is not a good matchup on paper for Florida State. The 19th-ranked Wolfpack pride themselves on stopping the run. They are allowing just 3.5 yards per carry and have only allowed one rushing touchdown all season.

Florida State’s defense is playing much better over the last few games. Even though the Seminoles were gifted some turnovers by Clemson’s struggling quarterback, the defense only allowed 24 points in their last game.

FSU’s defensive unit continues to climb the SP+ rankings. This week, it finds itself climbing four spots to 49th.

North Carolina State has a middling offense. It struggles to put up numbers in the running game and is currently second-to-last in the ACC in rushing yards per game. The Wolfpack currently field the 51st-ranked offense in the country.

However, quarterback Devin Leary is having quite a year. After throwing a interception in each of his first two games, the sophomore hasn’t thrown another all season. In the meantime, Leary has tallied 20 total touchdowns over the last six games.

The FSU secondary will have to play much better than it has thus far to dominate this game. On the other hand, Florida State’s front four has been on fire and should have no issues stopping the run.

If the ‘Noles can continue to be stout in the trenches and force the Wolfpack into 3rd-and-long situations, they will have a good shot at winning this game. But the defense can only play for so long, so success will largely depend on whether the offense can sustain drives.

Mike: FSU, 28-26. Florida State’s 3-game winning streak came to an end last week, but this is not the same team that started 0-4. The Seminoles are a desperate team and NC State hasn’t played great away from Raleigh. The Wolfpack are just 1-2 on the road this season with losses to Mississippi State and Miami.

Jake: NC State, 35-17. Clemson gave us the formula to stop FSU’s offense and NC State has the personnel to pull it off. The ‘Noles will be forced to win in the passing game, and they simply can’t.