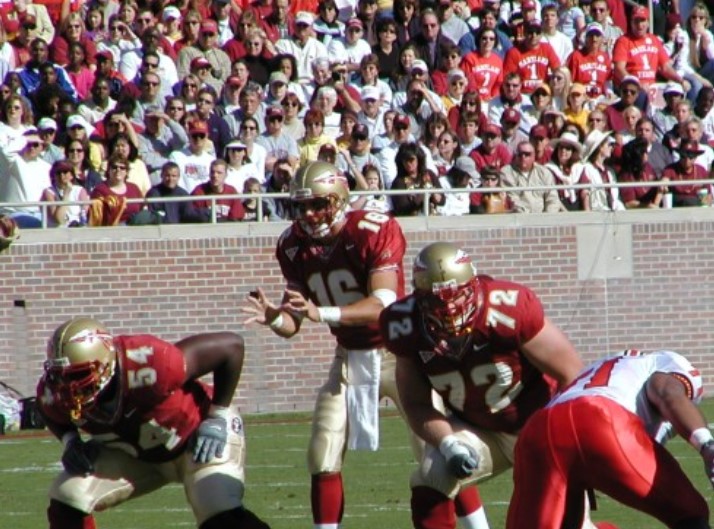 For its first nine years as a member of the ACC, Florida State won the conference every season.

It was Maryland in 2001 that ultimately ended the streak. On the field however, FSU still got the better of the match-up.

On this day 20 years, the Seminoles rallied from 14 points down to top the 10th-ranked Terrapins. FSU scored the game’s final 21 points en route to a 52-31 victory.

After five straight losing seasons, Maryland was the surprise of the ACC. Under first-year head coach Ralph Friedgen, the Terrapins were a perfect 7-0 as they arrived at Doak Campbell Stadium on Oct. 27, 2001.

FSU had won the ACC in each of the previous nine seasons and were coming off a stretch of 14 straight top-5 finishes. In 2001 however, the Seminoles were off to a 4-2 start with blowout losses to North Carolina and Miami. FSU arrived with a No. 19 national ranking.

Through three quarters, the contest was deadlocked at 31. In a five-and-a-half minute span in the final quarter however, things changed dramatically with three touchdown passes from FSU quarterback Chris Rix.

The final period was less than three minutes old when Rix found Talman Gardner for the 28-yard touchdown pass that put FSU ahead for good, 38-31. On the very next play from scrimmage, Maryland’s Bruce Perry was stripped by FSU’s Darnell Dockett. The Seminoles recovered and found paydirt three plays later.

Rix’s 22-yard touchdown pass to Javon Walker gave FSU its biggest lead of the day 45-31, but the Seminoles weren’t done. After a 3-and-out from Maryland, FSU went 80 yards in six plays to turn the contest into a rout.

After a 47-yard completion from Rix to Atrews Bell on 3rd-and-13 kept the drive alive, the two hooked up for a 31-yard touchdown three plays later. It was Rix’s fifth touchdown toss of the day as he finished with a then career-high 350 yards passing. Gardner and Bell finished 140 and 104 yards receiving, respectively.

Things couldn’t have started much better for Maryland. James Lynch’s 65-yard touchdown run accounted for all the scoring in the first quarter. With 6:16 remaining in the second quarter, Perry scored from a yard out to give the Terrapins an early 14-0 lead. Before the half was over however, it was FSU who moved in front.

Rix’s first of three touchdown passes to Garnder — a 16-yard strike 91 seconds later — got FSU on the board. On the very next play, Michael Boulware returned Shaun Hill’s interception 23 yards for a touchdown to tie the game. Less than three minutes later, Rix and Garnder hooked up for a 9-yard touchdown to give FSU its first lead, 21-14.

The next 10 points however, belonged to Maryland. After Nick Novak kicked a 51-yard field goal on the final play of the first half, Perry’s second touchdown on the opening drive of the second half gave the Terrapins their final lead, 24-21.

Xavier Beitia’s 31-yard field goal tied the game before FSU again showed its opportunism. Following a fumble by Jamal Chance on the ensuing kickoff, FSU marched 15 yards, capped by Greg Jones’ 5-yard touchdown run. Maryland responded with a 12-play, 82-yard drive as Hill sneaked it in from the 1 for the tying score with 1:53 remaining in the third quarter.

With the win, FSU moved into the driver’s seat to win the ACC for a 10th straight year. Later in the year however, a home loss to NC State — the first-ever for FSU in the ACC — would prove costly. After a loss to Florida, FSU closed the season with wins over Georgia Tech and then Virginia Tech in the Gator Bowl to finish 8-4 and No. 15 in the polls.

Maryland would go on to finish the regular season with a 10-1 record before falling to Florida in the Orange Bowl, 56-23. The ACC title would be the last for Maryland as a member of the conference. Its only conference loss that season came to Florida State and on this day two decades ago.