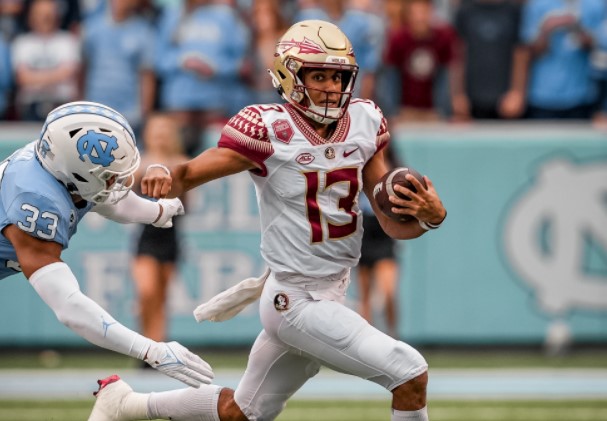 Florida State is a winner for the second straight week. On Saturday, the Seminoles overcame an early 10-point deficit to knock off North Carolina in Chapel Hill, 35-25.

After an 0-4 start, FSU has now found a way to win consecutive games and even its ACC record. The Seminoles will now get a week off before hosting Massachusetts for homecoming.

Before they do however, the Fifth Quarter staff recognizes the top performers from FSU’s victory on Saturday. Handing out game balls this week is editors Mike Ferguson, Cory Thorpe and FSU lead writer Jake Bunting:

Unanimous Game Ball: Jordan Travis, QB
In Saturday’s victory, Jordan Travis had one of the best games that an FSU signal caller has had in a long time. Travis accounted for all five FSU touchdowns. In addition to an uber-efficient passing day in which Travis went 11-for-13 with 145 yards passing and three touchdown tosses, the redshirt sophomore led all rushers with 121 yards and two touchdowns on just 14 carries.

Mike’s Game Ball: Jarrian Jones, CB
FSU has been waiting for someone to make a big play in the secondary and cornerback Jarrian Jones came through at an opportune time. With FSU leading 14-10 midway through the second quarter and the Tar Heels driving to take the lead, Jones made an outstanding play on a Sam Howell throw into the end zone for the interception. That would serve as the game’s lone turnover. Jones also recorded three tackles.

Cory and Jake’s Game Ball: Jermaine Johnson, DE
Jermaine Johnson continues to be a shining star for FSU. The Georgia transfer tallied six tackles and the game’s only sack on Saturday. Johnson entered Saturday leading the ACC with 5.5 sacks and ranking second in the conference with 7.5 tackles for loss.

Mike and Jake’s Game Ball: Travis Jay, KR
Big returns have been few and far between, but Travis Jay provided a spark for the Seminoles on Saturday. With FSU trailing 10-0, Jay burst for a 41-yard return. The Seminoles would end up going 59 yards for their first touchdown on the ensuing drive.