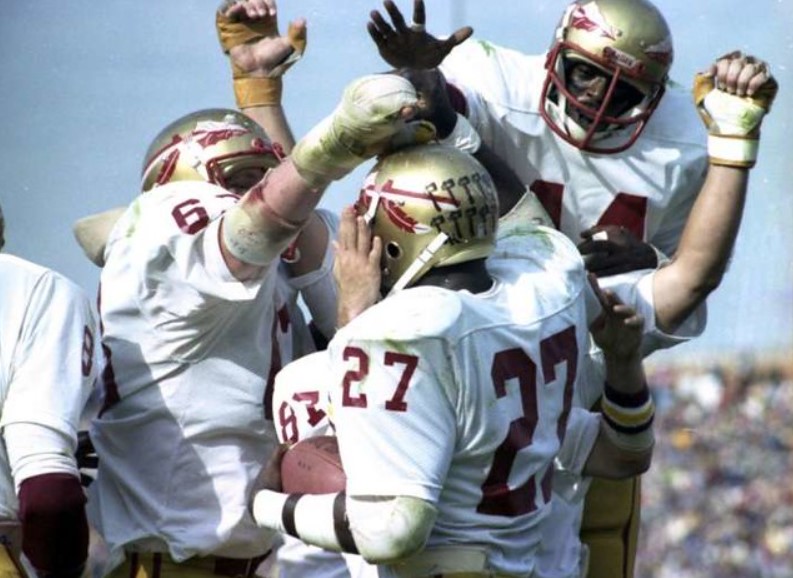 The most famous match-up in Florida State’s history with Notre Dame was the 1993 contest dubbed, “The Game of the Century”. In that one, the No. 2 Fighting Irish held off the top-ranked Seminoles, 31-24.

The first meeting however, came more than 12 years prior and on this day 40 years ago. FSU scored its second significant road victory in as many weeks with a 19-13 win in South Bend.

Notre Dame came in just 2-2 under first-year head coach Gerry Faust. Despite falling from No. 1 to unranked, the Fighting Irish owned impressive wins over LSU and Michigan State.

For a half, neither offense could get much going. FSU’s Rick Stockstill was intercepted twice in the first half, but Mike Rendina’s short field goal got the Seminoles on the board as the contest went to halftime tied, 3-3.

Stockstill’s third interception and second to Notre Dame linebacker Mark Zavagnin came on the first play of the second half. It set the Fighting Irish up inside the FSU 10-yard-line, but they were forced to settle for a short Harry Oliver field goal.

Down 6-3, FSU proceeded to march 80 yards for the lead. Facing 3rd-and-15 from the Notre Dame 17-yard-line, Stockstill delivered a touchdown strike to Michael Whiting. The Seminoles never trailed again, but would need another connection between Stockstill and Whiting late.

After Rendina’s short field goal increased the lead to 13-6, it looked as though FSU may seize control. FSU’s Henry Taylor forced a John Sweeney fumble on the ensuing kickoff, but Redina missed from 34 yards away as it remained a 1-score game.

Notre Dame proceeded to go 80 yards for the tying score. Facing 4th-and-goal from the 1-yard-line, Notre Dame’s Greg Bell scored on the first play of the fourth quarter to knot the game at 13.

FSU punted on its next possession, but James Harris intercepted Blair Kiel to set the Seminoles up at the Fighting Irish 31. Four plays later, Stockstill found Whiting for the 5-yard go-ahead touchdown with 7:41 remaining.

A missed extra point kept the lead at 19-13, but FSU held Notre Dame without a first down the rest of the way. With less than a minute to play, FSU’s Harvey Clayton intercepted Notre Dame senior Tim Koegel to seal the victory.

In a contest where each team turned it over twice, FSU had the statistical upper-hand. The Seminoles finished with 364 yards of offense to 256 for Notre Dame.

Williams led all rushers with 135 yards on 15 carries. Whiting rushed for 71 yards in the win and led FSU with 44 yards receiving. Bell led Notre Dame with 120 yards rushing.

While Zavagnin led the Fighting with two interceptions, Tommy Young had a big day for FSU. Young tallied 15 tackles and a forced fumble.

The 1981 season didn’t turn out to be a spectacular one for either school. Notre Dame finished just 5-6 in its first season under Faust. After a 4-1 start, the Seminoles dropped four of their final six games to finish 6-5. It was the final time during legendary head coach Bobby Bowden’s tenure that FSU failed to make a bowl game.

Still, going to South Bend and topping Notre Dame was a significant moment for FSU as a football program. That victory came on this day four decades ago.