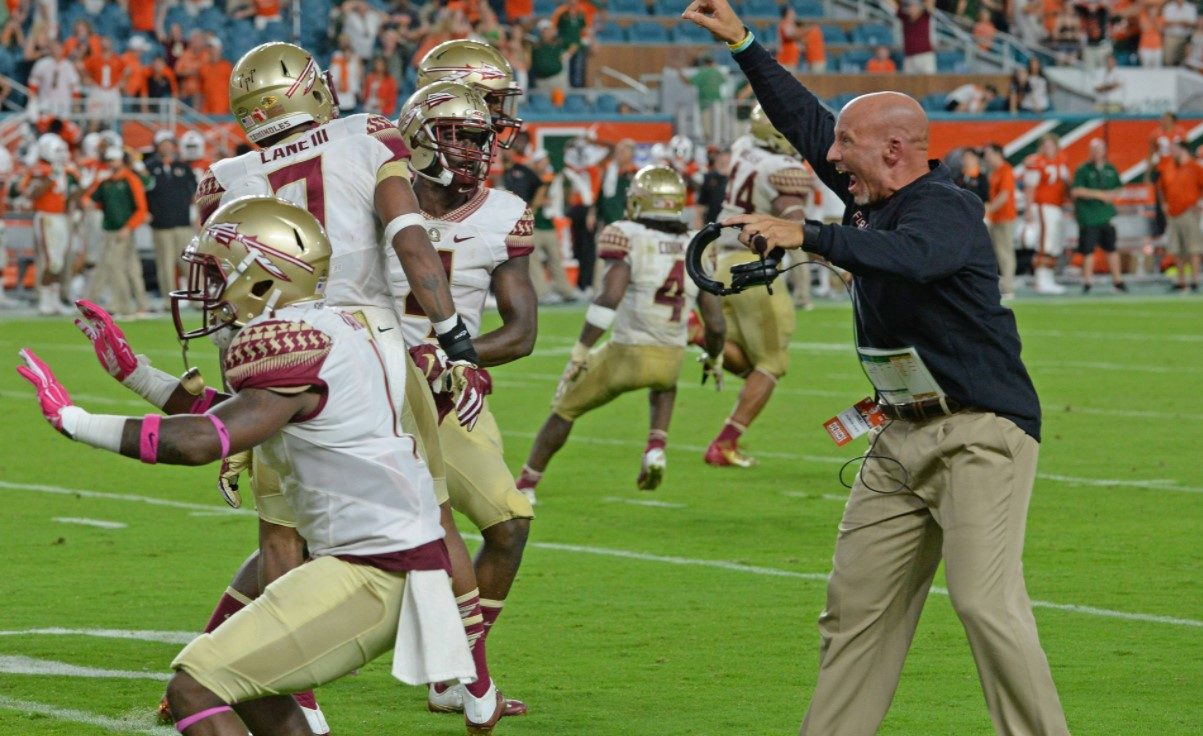 For about three decades now, the kicking game has been a point of emphasis in games between Florida State and Miami.

For the 1990s and early-2000s, that seemed to work in the Hurricanes’ favor. In recent years however, that aspect of the game has been advantage, Seminoles.

That was the case on this day five years ago. A blocked extra point was ultimately the difference as FSU topped Miami for a seventh straight year, 20-19.

Florida State had won six straight games over Miami as the teams arrived at Hard Rock Stadium on Oct. 8, 2016. The Hurricanes however, were the favorites entering the contest.

FSU had struggled defensively and was just 3-2 on the young season and ranked 23rd. Miami was a perfect 4-0 and ranked No. 10 as it looked for its first home win over the Seminoles in 12 years. Unfortunately for Miami, those dreams would be crushed in the most unthinkable of ways.

The “Block at the Rock”

After trailing 13-0 early on, the Seminoles had scored 20 straight points and were perhaps just one stop away from sealing the win. On the decisive drive however, the defense wasn’t put in the best of positions.

The Hurricanes started their final drive at the FSU 16-yard-line after a 43-yard punt return by Braxton Berrios. FSU punter Logan Tyler was just able to get a hand on Berrios’ ankle to prevent the touchdown.

With just more than three minutes to play, Miami used its first three plays to put the ball in the hands of running back Mark Walton. But on 3rd-and-3, Walton was stopped for a 2-yard loss. The contest came down to one play.

On 4th-and-5 from the 11-yard line, Miami quarterback Brad Kaaya lofted a perfect strike to Stacy Coley who made the catch against tight coverage from FSU’s Tarvarus McFadden. The 11-yard touchdown made it a 20-19 game. The extra point attempt with 1:38 remaining seemed like little more than a formality.

Kicker Michael Badgley had made 72 straight extra points for the Hurricanes. On the tying try, FSU All-American defensive end DeMarcus Walker was able to get penetration and one hand on the football, causing it to fall innocently to the grass. The FSU lead was preserved.

With three timeouts remaining, Miami elected to kick the ball deep, but would never see it again. FSU quarterback Deondre Francois’ 10-yard run for a first down on the second play of the possession allowed the Seminoles to run out the clock.

Badgley connected on field goals with 1:16 to play in each of the first two quarters, which bookended a 21-yard touchdown strike from Kaaya to Coley as Miami raced to a 13-0 lead. FSU got on the board with six seconds left in the first half on a 31-yard field goal by Ricky Aguayo. Miami had a chance to extend the lead early in the third, but McFadden picked off Kaaya in the end zone on a momentum-changing play.

After scoring the winning touchdown the year prior against the Hurricanes, Miami native and FSU running back Dalvin Cook scored FSU’s first touchdown on a 59-yard reception from Francois midway through the third quarter. Francois’ 20-yard touchdown pass to Kermit Whitfield less than five minutes later put the Seminoles ahead for good.

Leading 17-13 after three quarters, Aguayo extended the lead to seven on a 32-yard field goal with 9:02 to play. That would cap the scoring for Florida State.

Francois passed for 234 yards in the win for FSU. Cook added 209 yards of total offense for the Seminoles with 150 of those coming on the ground.

Whitfield led all receivers with 83 yards. Kaaya passed for 214 yards in the defeat.

The 20-19 victory served as the seventh straight for FSU over Miami. Although they have yet to play this season, it remains the last win for the Seminoles in the series. It happened on this day five years ago.

This article was cross-posted at CFB Home.