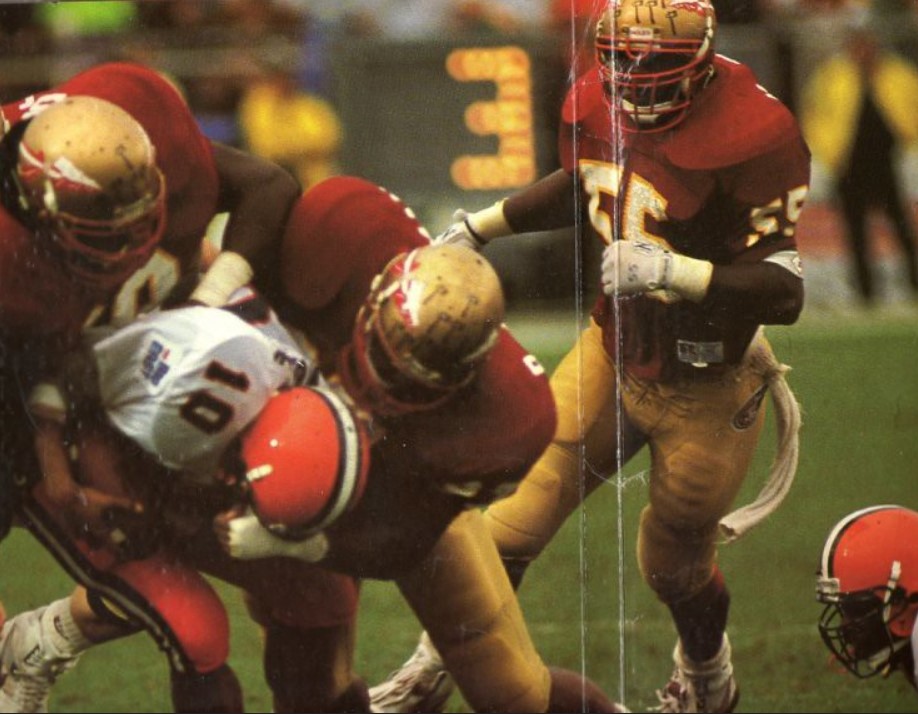 Following Saturday’s meeting, Florida State and Syracuse have met 14 times on the gridiron. Only once however, have both teams been ranked in the top 10.

That match-up came on this day 30 years ago in Tallahassee. The Orangemen proved to be no match for the top-ranked Seminoles in a 46-14 rout.

Syracuse was 4-0 and ranked No. 10 as it arrived at Doak Campbell Stadium on Oct. 5, 1991. The Orangemen had cruised through the early part of their schedule, which included an impressive 38-21 home victory over No. 5 Florida.

Ranked No. 1 since the preseason, Florida State was also 4-0. The Seminoles had already knocked off a pair of ranked opponents, including a 51-31 win over No. 3 Michigan the week prior.

Early on, it appeared that Florida State would be in for a fight. The Orangemen scored less than a minute in and actually held a 14-7 lead after a quarter.

It took just two plays and 23 seconds for Syracuse to go 80 yards and find the end zone. Marvin Graves capped the drive with a 44-yard touchdown pass to Qadry Ismail. After FSU tied the game late in the first quarter on a 12-yard touchdown pass from Casey Weldon to Matt Frier, Ismail returned the ensuing kickoff 95 yards for a touchdown.

The next 39 points however, would belong to the Seminoles.

Weldon finished the day with 347 yards passing and three touchdowns. As a team, the Seminoles racked up nearly 650 yards of offense.

FSU drew even on Weldon’s 7-yard touchdown pass to Edgar Bennett midway through the second quarter before ultimately going ahead for good on Dan Mowrey’s 27-yard field goal. The FSU lead was just 17-14 at halftime, but it wasted no time opening that up in the second half.

After a 1-yard touchdown run by Bennett made it 23-14, Weldon connected with Shannon Baker for a 50-yard touchdown late in the third quarter. Baker finished with five catches for 139 yards in the victory.

The final quarter was less than 90 seconds old when Toddrick McIntosh sacked Graves in the end zone for a safety to make it 32-14. Sean Jackson capped off the ensuing drive with a touchdown run on a day where he rushed for 96 yards on just nine carries. Amp Lee led the FSU rushing attack with 106 yards.

The exclamation point came with just over three minutes remaining as Brad Johnson found Lonnie Johnson for a 15-yard score. After going 80 yards on the first two plays, Syracuse managed just 105 the rest of the way. Marvin Jones finished with nine tackles and two sacks for the FSU defense. Clifton Abraham and Terrell Buckley each came away with interceptions.

Syracuse would lose again the following week to East Carolina, but would bounce back to win its last six games. Following a Hall of Fame Bowl victory over Ohio State, the Orangemen finished ninth in the final polls.

FSU would start 10-0 and keep its No. 1 ranking before dropping back-to-back rivalry games to top-5 Miami and Florida teams by a combined six points. The Seminoles would rebound to beat Texas A&M 10-2 in the Cotton Bowl to finish in the top 5 for a fifth straight season.

Despite the late-season slide, FSU knocked off four ranked opponents and three top-10 teams throughout the course of the 1991 season. The most convincing of those victories came on this day three decades ago.