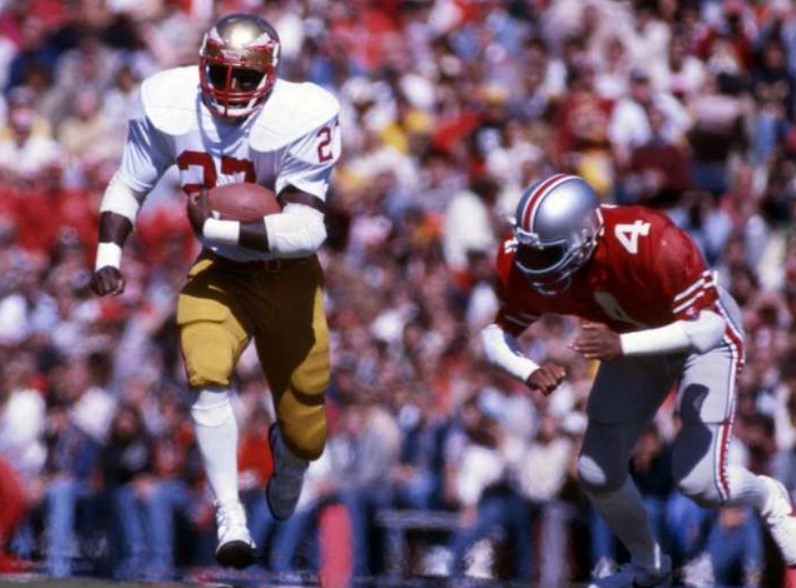 An 18-14 win over No. 3 Nebraska in Lincoln in 1980 really helped launch the program. A year later, the Seminoles again went on the road and knocked off a top-10 opponent.

Ohio State was a perfect 3-0 as it arrived for its third home game of the season. The Buckeyes had finished ranked in each of their first two years under head coach Earle Bruce and had moved up four spots since beginning the year ranked 11th.

Neither the first half nor the contest in general saw any shortage of offense. There were six lead changes over the first 22 minutes alone.

The game was just over four minutes old when Tim Spencer scored from nine yards out to give the Buckeyes the early 7-0 lead. Before the quarter was over, it was the Seminoles who were in front.

After Mike Rendina knocked through a 52-yard field goal to put FSU on the board, Jessie Hester returned a blocked punt 35 yards to give the Seminoles their first lead, 10-7. In less than a 6-minute span early in the second quarter, the teams would combine for four scores.

14:20 remained in the first half when Jimmy Gayle scored from seven yards out to put Ohio State back in front, 13-10. A little more than two minutes later, Redina lined up for a 22-yard field goal attempt, but holder and backup quarterback Kelly Lowrey took off on a fake and went in for the 5-yard touchdown.

FSU led 17-13, but that would last for just 74 seconds. With less than 11 minutes to play in the half, Ohio State regained the lead on Art Schlichter’s 52-yard touchdown pass to Gary Williams. He then connected with Spencer for the 2-point conversion.

Ohio State was back in front 21-17, but that would be its last lead of the day. FSU went in front for good with 8:25 left in the first half. After a long completion to Dennis McKinnon put the Seminoles in the red zone, quarterback Rick Stockstill found Tony Johnson for the 13-yard touchdown.

From there, the defense settled in. FSU led 23-21 at the break, but increased that lead with a pair of third-quarter touchdowns. FSU scored on its opening drive of the second half as Stockstill found Sam Childers for the 7-yard touchdown. After stopping the Buckeyes on 4th-and-goal from the 1-yard-line later in the quarter, FSU mounted a 99-yard touchdown drive to seize control.

Ricky Williams’ 3-yard touchdown run pushed the lead to 36-21. Ohio State found the end zone less than three minutes into the final quarter on an 18-yard touchdown pass from Schlichter to Cedric Anderson, but the 2-point conversion try was no good.

That would be the final threat from Ohio State. The Buckeyes were unable to make it past the FSU 36-yard-line the rest of the way.

Both teams finished with 496 yards of offense in the contest. Stockstill passed for 299 yards to go with a pair of touchdown passes. McKinnon led FSU receivers with 107 yards on five catches.

Schlichter passed for 458 yards in the loss as Ohio State managed just 38 yards on the ground. Williams and Anderson combined for 21 catches and 378 yards. Williams finished with 13 catches for 220 yards. FSU’s Michael Whiting led all rushers with 90 yards on 15 carries.

Ohio State would lose at Wisconsin the following week, but won six of its final seven games. That included at No. 7 Michigan and over Navy in the Liberty Bowl to finish 9-3 and in the top 15.

FSU would reel off impressive road wins over Notre Dame and LSU, but after a 6-2 start, finished the year on a 3-game losing streak. The Seminoles finished just 6-5 and would miss a bowl for the final time under Bowden.

They did however, make a statement with a win at Ohio State. They did so on this day four decades ago.