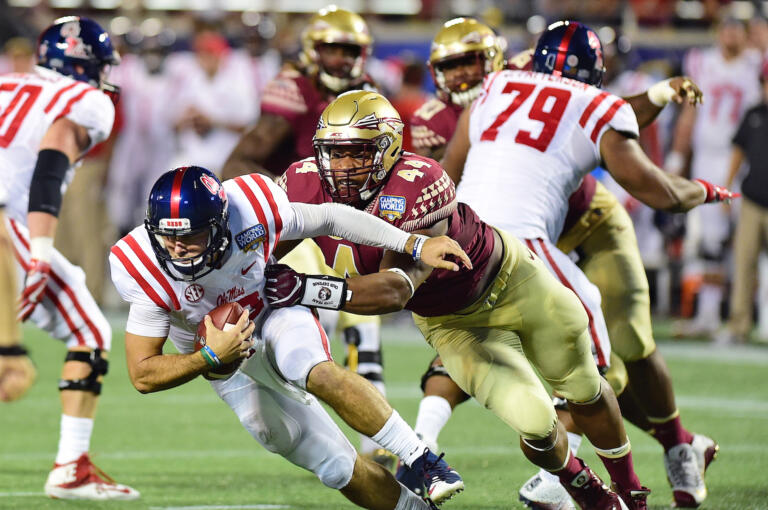 Jimbo Fisher’s teams at Florida State were often compared to an SEC team.

When it came to taking on the SEC however, Fisher’s Seminoles rarely had much of a problem. In eight seasons under Fisher, FSU was 9-2 against SEC opponents.

One of those victories came in the 2016 opener on this day five years ago. The Seminoles rallied from 22 points down to top Ole Miss in Orlando, 45-34.

Ole Miss was ranked No. 11 and coming off its highest AP Poll finish in 46 years as it made its way to Camping World Stadium in Orlando on Sept. 5, 2016. The Rebels had finished 10-3 and No. 9 the year prior, which included a victory over eventual national champion Alabama and a thumping of Oklahoma State in the Sugar Bowl.

FSU was also coming off a 10-3 season as the Seminoles arrived ranked fourth in the country. The 2015 season for FSU had ended with a loss to Houston in the Peach Bowl. For a half on Labor Day, it looked as though the 2016 season would start the same way.

Behind three touchdown passes from quarterback Chad Kelly, Ole Miss raced to a 28-6 as the first half clock headed toward triple zeroes. With 28 seconds remaining in the second quarter however, FSU finally found the end zone.

Making his first career start, quarterback Deondre Francois stood in and took a shot before finding Travis Rudolph for a 16-yard touchdown. That would begin a streak of 33 straight points for the Seminoles.

After FSU’s opening drive of the second half ended in Ricky Aguayo’s third field goal of the night, defensive end DeMarcus Walker and the Seminole defense took over. Marcus Lewis’ interception of Kelly on the second play of the ensuing Ole Miss drive would set up a short touchdown run by fullback Freddie Stevenson three plays later.

Ole Miss’ next possession again ended in two plays on a turnover. Walker’s strip sack of Kelly set FSU up at the Rebels’ 11-yard-line. Three plays later, wide receiver Kermit Whitfield was able to give FSU its first lead of the night on a 3-yard touchdown run.

Ole Miss needed just four plays to answer as Kelly found Van Jefferson on a 20-yard scoring strike for his fourth touchdown pass of the night. With more than 12 minutes to play, Ole Miss was within five, but the Rebels managed just 10 yards the rest of the way. Aguayo added field goals of 44 and 30 yards to finish with a school-record six makes in the victory.

Statistically, FSU dominated the game, finishing with 580 yards of offense to 380 for Ole Miss. In his first career start, Francois finished with 419 yards passing, two touchdowns and 59 yards rushing. Bobo Wilson tallied a game-high 125 yards receiving on nine catches for FSU while running back Dalvin Cook totaled 192 yards from scrimmage.

The FSU defense forced four turnovers in the win. Walker finished the night with 4.5 sacks and a forced fumble.

Kelly finished with 313 yards passing for Ole Miss, but was intercepted three times. Derwin James, Lewis and Tavarus McFadden all came away with interceptions in the victory. Evan Engram led the Rebels with nine receptions for 121 yards and a touchdown.

Although all the wins would be later vacated, Ole Miss would go on to finish a disappointing 5-7. FSU went on to finish 10-3 for the second year in a row, capping the season with an Orange Bowl victory over Michigan.

The Seminoles would finish in the AP top 10 for a fourth time in five years. That season began with the biggest comeback victory in program history on this day five years ago.

NOTE: This article was cross-posted on CFBHome