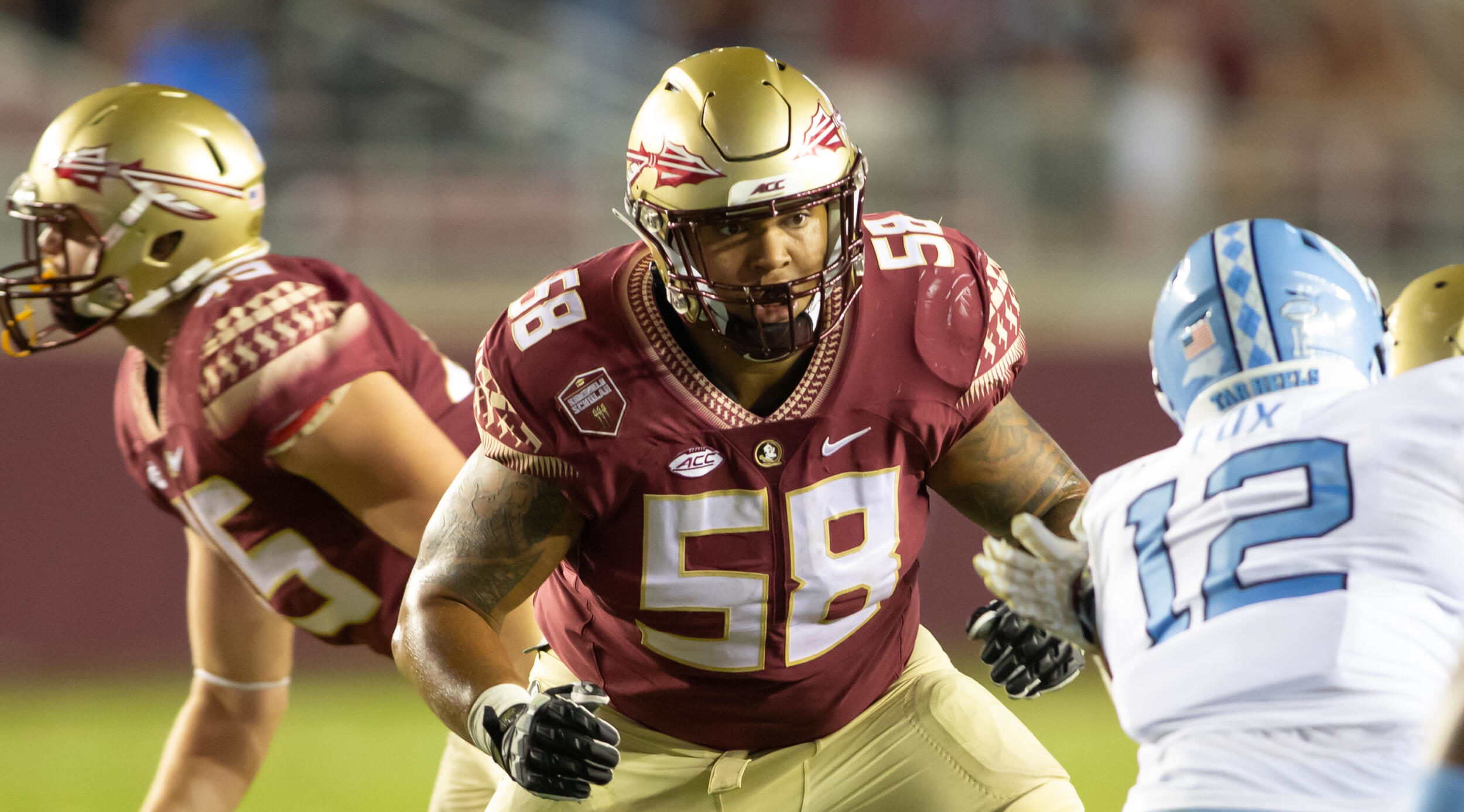 No position group at Florida State over the last few years has taken more of a beating from fans and media than the offensive line, and not without good reason. The Seminoles’ offensive front has been downright abysmal throughout its fall from prominence.

This group ranked 80th, 110th, and 105th in success rate from 2017 to 2019. Luckily for the ‘Noles, head coach Mike Norvell brought in a gem in offensive line coach Alex Atkins. Atkins took an offseason without a full spring and produced a line ranked 47th in offensive success rate.

Statistical improvement in success rates was partially due to “the Travis effect”. Quarterback Jordan Travis’ scrambling ability did wonders for the run game. However, the unit showed marked improvement in time until pressure and rushing yards before contact. These metrics are indicative of a line that has legitimately improved as a blocking unit.

If FSU’s offensive line can continue improving under Coach Atkins, this group could be a strength that the ‘Noles can rely on.

Let’s take a look at who the major players will be in the offensive trenches:

Offensive line is perhaps the most important position for player development. Rarely can true freshman linemen step in and contribute at a high level immediately. Often, necessity requires freshmen to step in and play, but ideally, incoming players will have time to develop in a college-level strength and conditioning program.

Florida State’s offensive trenches are beginning to reach the point where a number of players are expected to simply develop and not see the field, barring injury. For starters, the 2021 class brought in four-star tackle Rod Orr and Bryson Estes. These two have high floors but need to develop strength and knowledge.

Zane Herring, Jalen Goss, Thomas Shrader, and Ira Henry III all possess upside and provide depth, but they are not expected to start this season. Shrader and Herring have the highest chance of making the rotation this year, but they have both dealt with injuries.

FSU returns the majority of its offensive line production from last year. The group has a relatively set lineup with a set of solid depth pieces who can slide anywhere on the line.

At tackle, the two projected starters are Devontay Love-Taylor and Robert Scott. Love-Taylor, known as DLT, was FSU’s best offensive lineman in 2020 before his season-ending injury. The talented senior is expected to once again be the team’s best lineman if he can stay healthy.

At guard, Dontae Lucas and Dillan Gibbons will likely be starting along the interior. Lucas is in his third year at FSU and has the size and mean streak to continue to contribute. Gibbons is a new face on the line, transferring in from Notre Dame.

Gibbons has seen action in 29 games at Notre Dame, practicing and playing alongside one of the best offensive lines in the country. He brings the size and experience needed to plug in and contribute immediately.

Redshirt freshman Maurice Smith projects to start at center. Smith appeared in two games as a true freshman and started seven in his second year. He has been consistent in his snaps and blocking, beating out redshirt senior Baveon Johnson for the starting job during his second year at FSU.

Although not starters, the Seminoles have a solid group of depth players who will provide a mix of experience and skill to rotate in.

Two of these rotation players are still here from the Jimbo Fisher era. Brady Scott and Baveon Johnson have had their ups and downs at FSU. However, five years’ worth of strength and conditioning at FSU and plenty of action on the field means these two can reliably step in and do their job.

Other names of note are Darius Washington and Lloyd Willis. These two are young guys with incredibly high upside. Washington saw plenty of action in 2020 but suffered from a lingering shoulder injury.