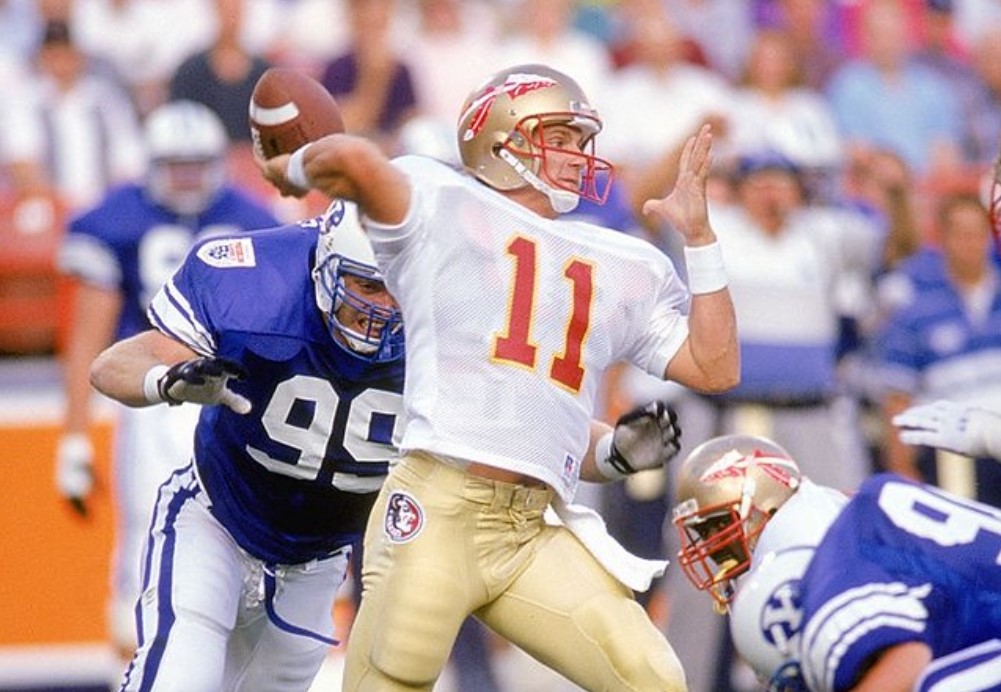 Over the years, Florida State has seen a handful of eventual Heisman Trophy winners and in some cases, reigning Heisman winners.

One of those occasions took place on this day 30 years ago. Against Ty Detmer and BYU, the Seminoles proved to be too much in the Pigskin Classic in Anaheim. FSU scored early and often in a 44-28 victory.

Led by reigning Heisman Trophy winner and quarterback Ty Detmer, BYU was ranked No. 19 and coming off a 10-win season in 1990 that saw the Cougars ascend to as high as No. 3 in the polls. After knocking off No. 1 Miami the year prior, BYU was looking to down the nation’s top-ranked team for a second straight season.

Throughout the day, it was domination for FSU on both sides of the ball. The Seminoles used a balanced attack to finish with 536 yards of total offense — 275 rushing and 268 passing.

Fullback Edgar Bennett led the way for FSU with 98 yards rushing. Bennett scored the game’s first two touchdowns — one rushing and another on a scoring toss from Casey Weldon — to give the Seminoles a 13-0 lead after one quarter. Amp Lee and Sean Jackson added 75 yards rushing apiece.

For BYU however, the ground game was nonexistent. The Cougars managed just 33 yards rushing on 19 carries. FSU forced the Cougars to be 1-dimension and Detmer to win the game by himself.

For a half, BYU was in the contest as the Seminoles led 28-14 at the break. BYU’s Peter Tuipulotu scored on touchdown runs of 21 and 22 yards in the second quarter. In between those touchdowns was a 6-yard scoring toss from Weldon to Eric Turral, followed by a 2-point conversion and Lee’s 5-yard touchdown run.

In the second half, FSU put the game out of reach. Bennett’s third touchdown midway through the third made it a 35-14 lead for the Seminoles before Jackson found the end zone less than five minutes into the final period. FSU’s Dan Footman sacked Detmer in the end zone for a safety to cap the scoring for the Seminoles.

Detmer would throw a pair of late touchdown passes to finish with 229 yards passing. He was intercepted once by eventual Jim Thorpe Award winner Terrell Buckley. Detmer was also sacked three times.

The best quarterback on the field that day however, was Weldon. Weldon also threw a pair of touchdowns, finishing 21-for-28 passing with 268 yards.

For FSU, the win served as a solid start to the year. The Seminoles would maintain their No. 1 national ranking until falling to Miami on Nov. 16.

FSU bounced back from a couple of late-season losses to beat Texas A&M in the Cotton Bowl and finish in the AP top 5 for a fifth straight year. That season started with a stellar showing against BYU that took place on this day three decades ago.