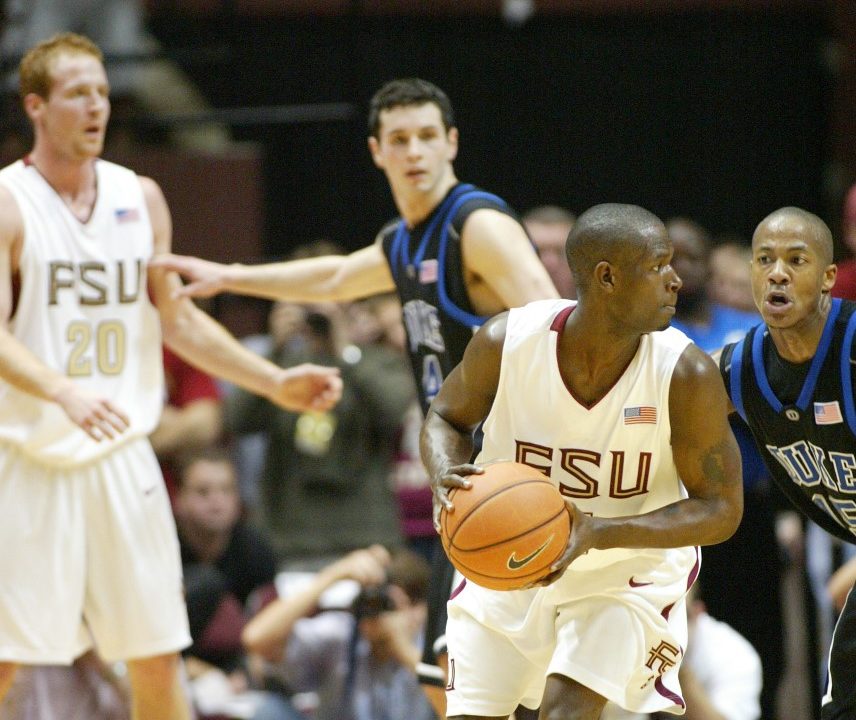 Throughout the 2000’s and to this day, there’s something about a highly-ranked Duke team coming to the Donald L. Tucker Center that brings out the best in Florida State basketball.

Duke was riding a 10-game winning streak and 27-1 overall when it took the court in Tallahassee on March 1, 2006. The Blue Devils had already won the ACC regular season title and were looking to stay hot heading into Senior Day in Durham.

It was Senior Day for FSU at the Donald L. Tucker Center. The Seminoles were 17-8, an even 7-7 in conference play and squarely on the bubble. In desperate need of a signature victory, FSU would find it against Mike Krzyzewski’s team.

Florida State had led by as many as 12 in the first half, but as the clock ticked under three minutes, it appeared as though the talent and experience of Duke would prevail. After All-American J.J. Redick’s fourth 3-pointer of the night had given the Blue Devils a 70-67 lead, Duke forward Sheldon Williams’ basket followed a pair of free throws by FSU’s Jason Rich.

With fewer than three minutes to go, the Seminoles trailed 72-69. Duke would not score again from the field.

Down the stretch, the foul line would be FSU’s friend. Forward Alexander Johnson knocked down a pair of free throws on the next possession to cut the lead back to one before Rich split a pair of free throws to draw FSU even with less than two minutes to play. Following a miss from deep by Redick, a short jumper by Johnson put the Seminoles ahead for good with just over a minute to go.

The Blue Devils had their chance to tie from the foul line with just 44 seconds remaining, but Demarcus Nelson missed the front end of a 1-and-1. On the other end, Johnson took advantage by knocking down two free throws to give FSU its biggest lead since the 18:30-mark.

Down 76-72, Duke struggled to get open looks from deep. Nelson and Redick each missed 3-pointers on the ensuing two possessions. After Redick followed a free throw by FSU’s Andrew Wilson with two of his own to cut the lead back to three, Al Thornton iced the game for the Seminoles with a pair of foul shots with a second remaining.

Things couldn’t have started much better for Florida State. Behind 10 early points from Thornton, who finished with a team-high 26, FSU raced to a 29-17 lead with less than five minutes to play in the first half.

Duke however, closed the half strong. The Blue Devils used four 3-pointers, including two from Redick, to close the half on a 16-7 run. Down 36-33 at the break, the Blue Devils needed just more than five minutes to pull in front in the second half.

Williams’ dunk put Duke in front and sparked a 10-2 run. The Blue Devils would lead by as many as seven in the second half, but FSU was able to regain the lead on a pair of Thornton free throws with less than eight minutes to play. The final 7:54 featured five ties and six lead changes.

In addition to Thornton’s 26, Johnson added 22 points and a team-high 13 rebounds for FSU. Todd Galloway added 11 points in the victory. FSU shot just 35% from the field, but finished 32-for-40 from the foul line.

Redick led all scorers with 30 points, but on just 10-for-28 shooting. Williams added 20 points and 16 boards in the loss.

The win looked like it would propel FSU to the NCAA Tournament, especially after it won at Miami to close the regular season. Unfortunately for the Seminoles, a bad loss to Wake Forest in the ACC Tournament would relegate them to the NIT.

Duke would go on to win the ACC for the second straight season and capture a No. 1 seed in the NCAA Tournament. The Blue Devils ultimately lost to LSU in the Sweet 16.

Although FSU was unable to make the tournament and lasted just two NIT games, the Seminoles finished with a winning record in ACC play for the first time in 13 years. It was FSU’s first 20-win season under head coach Leonard Hamilton. It wouldn’t have been possible without the upset of No. 1 Duke that took place on this day 15 years ago.