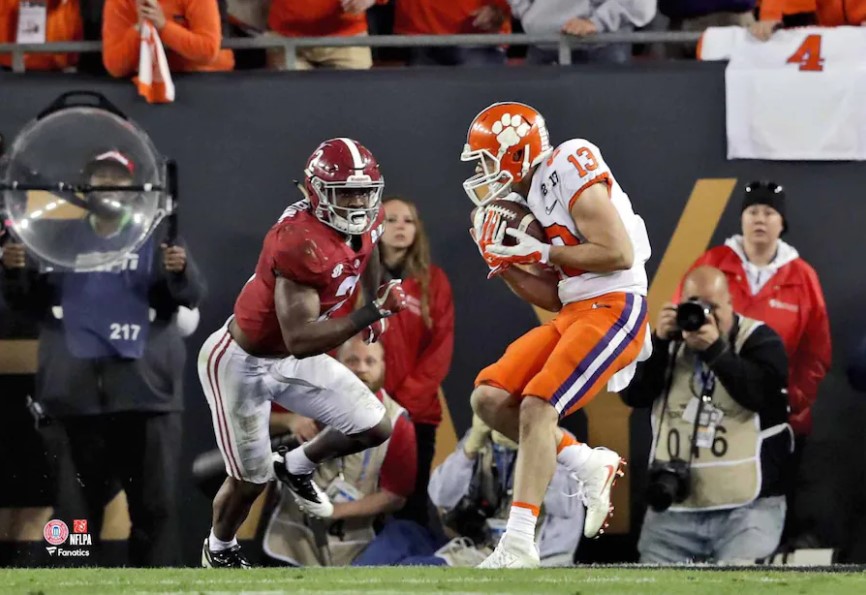 Over the years, there have been some thrilling national championship games.

That includes the one that took place on this day five years ago. Down 10 points entering the fourth quarter, Clemson stormed back to beat mighty Alabama

A last-second touchdown pass from Deshaun Watson to Hunter Renfrow was the difference as the Tigers emerged victorious in Tampa, 35-31.

In what served as a rematch of the previous year’s national championship, Alabama and Clemson arrived at Raymond James Stadium on Jan. 9, 2017 to play for college football’s ultimate prize. ACC champion Clemson was 13-1 and coming off a 31-0 shutout of Ohio State in the Fiesta Bowl. After coming up short the year prior, the Tigers were looking for their first national championship in 35 years.

Alabama, on the other hand, was 13-0 and the reigning national champions. Under head coach Nick Saban, Alabama was aiming for its fifth national title since 2009. After knocking off the Tigers 45-40 the year before, the Crimson Tide were 15 minutes away from repeating.

Entering the final quarter, Clemson was on the short end of a 24-14 score. The final period however, was just a minute old when he Tigers trimmed the lead to three.

Watson’s 4-yard touchdown pass to Mike Williams capped an 11-play drive and made it a 24-21 contest. The next five possessions all culminated in punts as the teams combined for just two first downs.

With less than seven minutes remaining, Clemson took over at its own 12-yard-line. After struggling on the previous two offensive possessions, Watson went to work with his arm and his legs.

Watson was 3-for-3 passing for 52 yards on the drive and rushed twice for 20 yards. Following a 15-yard run that set the ball up at the Alabama 1, Wayne Gallman plunged into the end zone to give the Tigers their first lead with 4:38 to play, 28-24.

Alabama quarterback Jalen Hurts had struggled as a passer for a large portion of the night, but on the ensuing drive, came up big. On 3rd-and-16, Hurts connected with ArDarius Stewart for 15 yards to set up a manageable fourth down. Damien Harris carried for five yards to keep the Alabama drive alive.

On the very next play, Alabama got tricky. Stewart was called on to throw and connected with O.J. Howard for 24 yards to the Clemson 30-yard-line. One play later, the middle of the field opened up and Hurts scrambled for a 30-yard touchdown to put the Crimson Tide back in front with 2:07 remaining, 31-28.

The game’s final drive began at the Clemson 32-yard-line. Watson was on point as he completed his first five passes to move the Tigers inside the Alabama 10. Following an incomplete pass, Watson threw to the end zone for Williams. It didn’t result in a touchdown, but pass interference was called with six seconds remaining.

With the ball on the 2-yard-line, Clemson head coach Dabo Swinney believed there was time to run another offensive play.

On the game’s final offensive snap, Watson rolled right. With a well-executed rub from a fellow receiver, Renfrow broke open to the outside. Watson’s throw was one on the money for the 2-yard touchdown with one second remaining.

Clemson had done it.

The Tigers were national champions.

By the early parts of the second quarter, Alabama led 14-0. Bo Scarbrough scored on runs of 25 and 37 yards and it appeared it would be a long night for the Tigers.

Before halftime however, Clemson was able to cut the lead in half on an 8-yard touchdown run by Watson. Alabama pushed the lead to 17-7 early in the third quarter before the teams traded touchdown passes.

After Watson’s 24-yard touchdown pass to Renfrow cut the lead to three, Hurts connected with Howard for a 68-yard score as the Crimson Tide took a 24-14 lead into the final quarter.

Statistically, Clemson had the upper hand. The Tigers finished with 511 yards to 376 yards for the Crimson Tide. Clemson did commit the game’s only two turnovers.

Hurts finished just 13-for-31 passing for 131 yards, but Alabama rushed for 221 yards as a team. Scarbrough led all rushers with 93 yards. Howard was the game’s top receiver with 106 yards on four catches.

Clemson and Alabama would meet again in each of the next two College Football Playoffs. The Crimson Tide beat Clemson in the semifinal round in the Sugar Bowl the following year, 24-6. In 2018, the Tigers blasted Alabama for the title, 44-16.