Column: Will the ACC Ever Reach Its Potential? 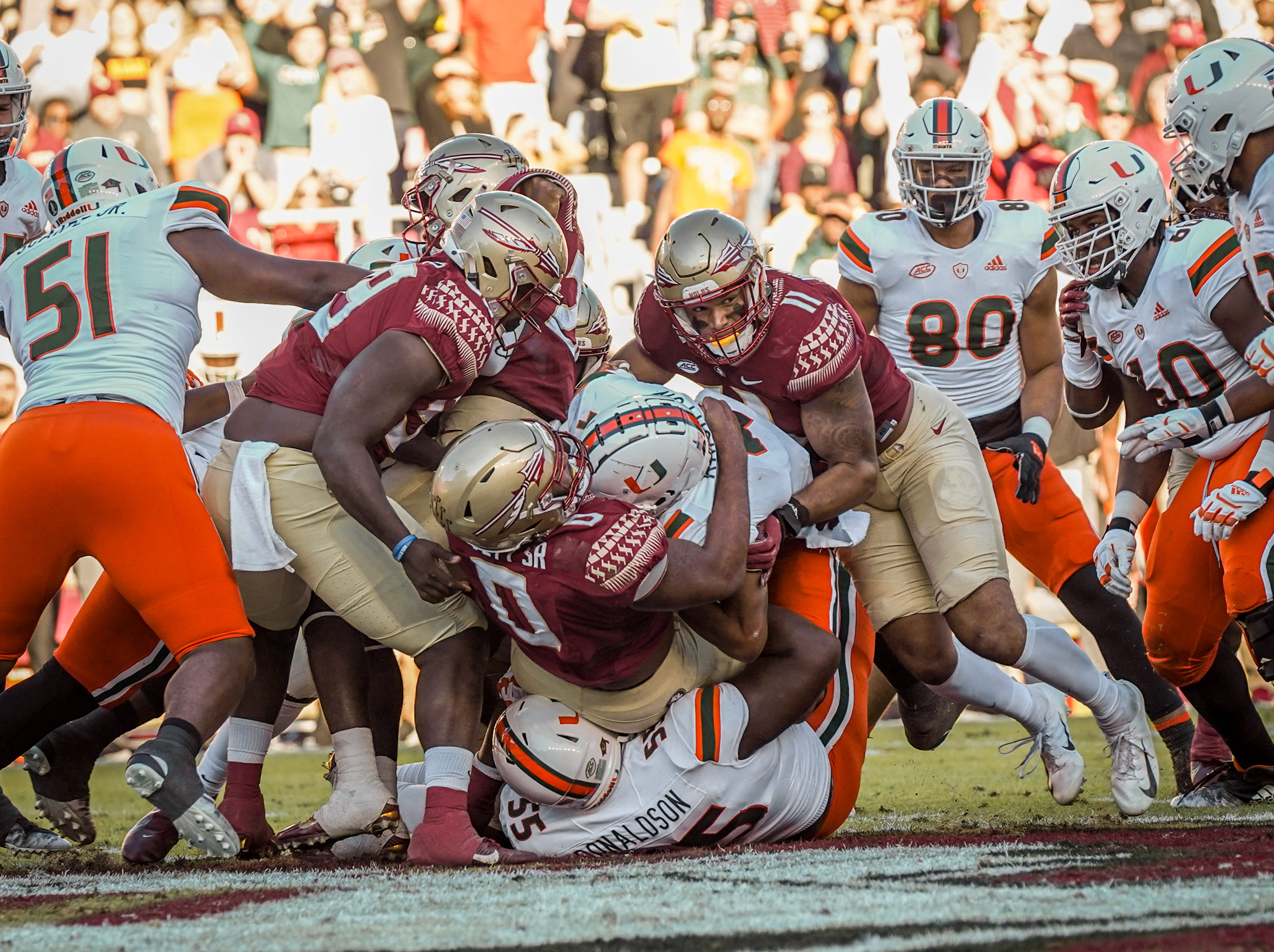 The Atlantic Coast Conference, in 2021, had by far the worst season of any Power 5 conference.

One can easily make the argument that the American Athletic Conference had a better 2021, and a majority would agree with that. For almost half of its history, the ACC was known for having teams range from Maryland down to South Carolina, with a central focus in North Carolina.

In 1983, the conference added Georgia Tech. In 1992, it welcomed Florida State and starting in 2004, it began raids on the Big East until that conference was demolished on the gridiron in 2014.

The problem is that with the conference growing, the football expectations grew as well.

The ACC has never lived up to its potential. Will it ever?

As a conference that shares a geographical footprint with the SEC, it should be closer in terms of football prowess.

In the mid-2000’s, there was the potential to have one of the most epic conference championships each year. When the ACC added Miami, the Hurricanes were still fresh off producing one of the best teams in college football history and entered the ACC having won four straight Big East titles.

In 2005, the inaugural ACC Championship game was scheduled to take place in Jacksonville. There was a strong belief that the regular season meeting between Florida State and Miami would often repeat itself with more on the line on a neutral field in the Sunshine State.

Five times, the ACC Championship has been played in Florida. Never have FSU and Miami met for the conference crown, however.

In 17 years as a conference member, Miami has only made it to the ACC Championship one time. Miami has been a huge disappointment to the conference since its addition. 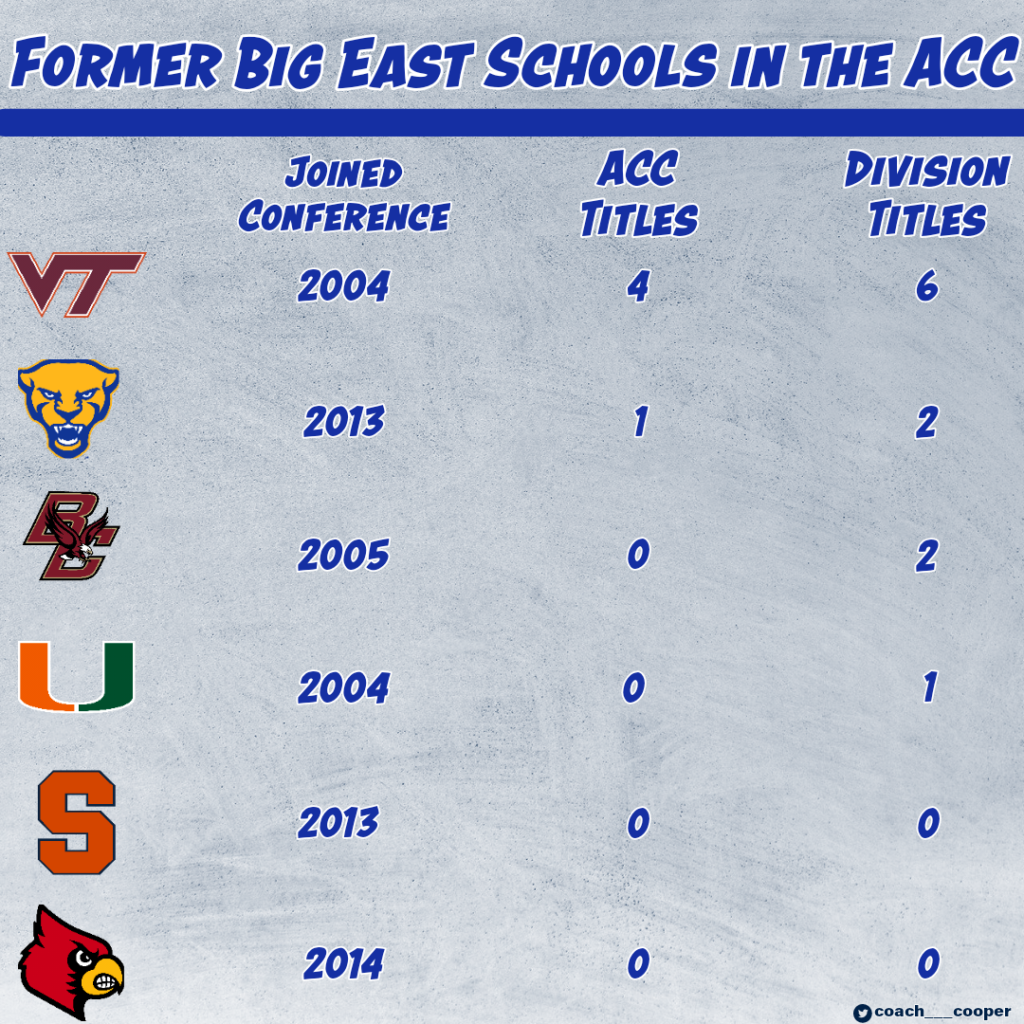 Of all the former Big East schools, Virginia Tech has brought home the most ACC hardware. The problem is that it hasn’t brought home anything recently. Out of the gate, Frank Beamer and the Hokies got off to a hot start, winning the ACC four times from 2004 to 2010.

There has been quite the decline over the last decade, and a mediocre start to this decade. The Hokies have only won one ACC Coastal division title in the past 10 seasons and no conference titles.

In fairness, all of the former Big East teams have struggled to win anything of significance over the past 10 years. Pat Narduzzi and Pittsburgh won the conference crown this season for the first time since joining the ACC in 2013. It will be interesting to see if they can carry that momentum.

While the SEC is taking college football centerstage by expanding to 16 teams, could the ACC do the same? While conference expansion hasn’t brought the ACC elite football prosperity, it has strengthened the conference as a whole, and set it up for survival in this new age.

The conference shouldn’t add any teams that might water down football. Instead, it should go big or go home. If it is unable to land a big name, the ACC should stay put until it can.

The list of teams for expansion is simple: Notre Dame and West Virginia. Obviously, Notre Dame would be hard to convince to join full-time, but if it consistently finishes just outside of the College Football Playoff, maybe there could be a window of opportunity.

If the ACC ever invited West Virginia, it would likely come. The ACC snobs would scream about academics, but West Virginia would fit nicely in the ACC.

If expansion isn’t your cup of tea, then maybe realigning divisions is. Over the last 12 ACC Championships, Clemson and Florida State have made 11 combined appearances. The problem is that they are in the same division. With Mike Norvell having the Seminoles slowly on the rise, maybe Clemson and FSU should separate divisions.

Originally, we thought Miami and FSU would be the scoring ticket for the conference. Potential title games between Clemson and Florida State perhaps could be.

Here is one way to realign the conference. It would potentially lead to better conference title games and protect some teams throughout the season for higher rankings:

Needs for the Conference

If you like this content, consider joining the Fifth Quarter Community for FREE. You can join our message board with 500+ members or the Discord Server with 1,000+ members. Come talk college football or anything off topic.