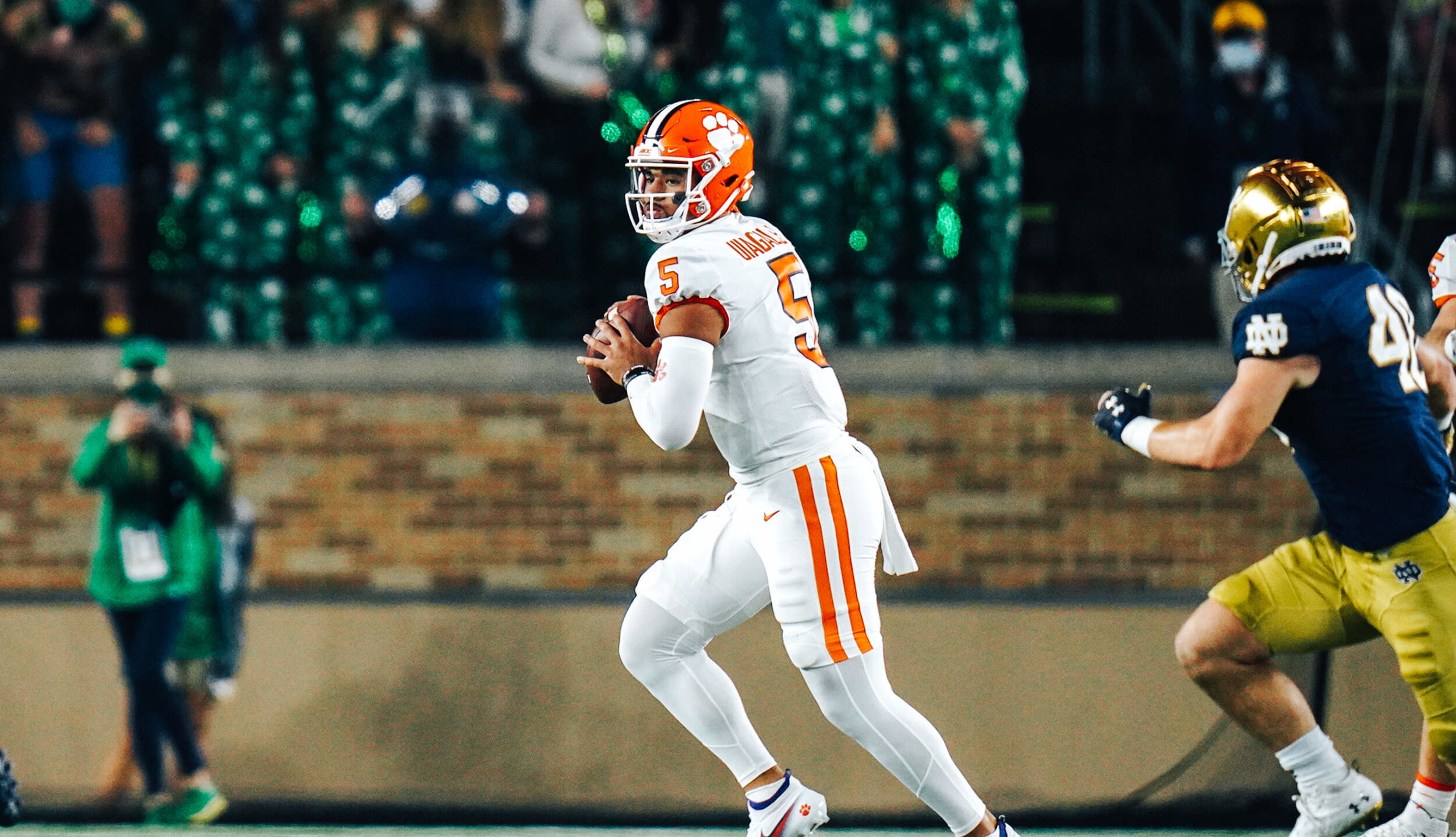 So who’s going to have a season to remember? Who may have one to forget? It’s time for our official projected ACC Atlantic division standings just ahead of Thursday night’s kickoff in Raleigh between South Florida and NC State.

The Trevor Lawrence era may be over at Clemson, but the Tigers have never shown any signs of slowing down.

DJ Uiagalelei is set to take the keys behind center for Dabo Swinney and company. When it’s all said and done, he may not be too far off from what Lawrence accomplished in rural South Carolina.

While star receivers Cornell Powell and Amari Rogers have made their way to the NFL, tight end Braden Galloway and a plethora of top-tier newcomers will help out the sophomore slinger when it comes to going to the air.

In terms of the defensive side of the football, it’s no surprise: the Tigers are stacked. Tyler Davis, Myles Murphy, and Justin Foster create a solid trio up front for a team that’s historically been good on the defensive line. In the secondary, Andrew Booth Jr. glues together Brent Venables’ defense.

The Tigers will be tested this season starting in Week 1 with Georgia, but it’s hard to bet against Swinney. Plus, Uiagalelei already has some big-game experience at Notre Dame and against Boston College.

Clemson will cruise to a perfect regular season and eventually a seventh straight ACC championship.

As they say up in Chestnut Hill, it’s time to “Get In.”

First-year head coach Jeff Hafley led BC to a solid 6-5 season in 2020 where there was a lot of uncertainty after firing longtime head coach Steve Addazio. A lot of the credit for success goes to quarterback Phil Jurkovec.

The Notre Dame transfer may be the most overlooked signal caller in the league. Combine him with star receiver Zay Flowers and the Eagles have something going offensively. Defensively, they’re solid too, and should improve immensely with an entire offseason to adapt to defensive-minded Hafley’s system. Look for Jahmin Muse to have a pretty solid season in the teeth of that BC defense.

It’s going to be a tight race behind Clemson in the Atlantic division. Boston College will emerge as the runner-up despite losses to Missouri, Clemson, Georgia Tech, and Wake Forest.

Dave Doeren hasn’t had the most stable tenure in his eight seasons so far in Raleigh. But we think he’s finally figured it out.

The Wolfpack are coming off a season in which they finished in the top half of the conference with an 8-4 record despite losing starting quarterback Devin Leary. Doeren made a major case for ACC Coach of the Year.

Now, Leary’s back in the fold, and all of his top targets are as well. Devin Carter, Emeka Emezie, and Thayer Thomas all pose as huge threats in the Wolfpack receiving corps. In the backfield, Zonovan Knight is one of the ACC’s best.

Don’t sleep on the Pack’s defense either. Payton Wilson can really play ball.

It’s going to be another solid season down in Raleigh, but losses to Clemson, Miami, and Boston College will result in a third place finish for NC State.

The Wake Forest Demon Deacons are consistently a thorn in the side of their Atlantic foes, and that’s a direct result of the guidance of head coach Dave Clawson. Clawson is quietly one of the best coaches in the ACC.

Quarterback Sam Hartman is the real deal as well, and when you pair him with receivers Jaquarri Robinson and Donavon Greene, the Demon Deacons have a real threat in the passing game. Christian Beal-Smith also returns to Winston-Salem after a 732-yard rushing campaign. Clawson’s offensive should be able to put up yards and points on a regular basis.

Defensively, the Deacs may be a bit lacking on the defensive line with the loss of star tackle Carlos “Boogie” Bashom. But Miles Fox could soften the blow a tad there. The secondary can be solid, but they need to have a big year from former walk-on Nick Anderson.

Losses to Florida State, Army, North Carolina, NC State, and Clemson will hold Wake Forest back, but it should be another season of promise in Winston-Salem.

It’s time for Florida State to get the Mike Norvell era underway. It may be year two for the former Memphis head coach, but there was little to be encouraged about in Tallahassee in 2020. That could quickly change.

Even though the Seminoles haven’t officially named a starting quarterback, the room itself has to make fans ecstatic. Either Jordan Travis or UCF transfer McKenzie Milton will be taking snaps for Florida State.

The receiving corps that surrounds him is solid as well. Ontaria Wilson and tight end Camren McDonald should be targeted quite a bit this season — no matter who finds himself behind center. Jashaun Corbin and Auburn transfer D.J. Williams should provide a feasible threat on the ground for a team that returns the majority of its offensive line.

On the defensive side, Norvell is going to want to see improvement from a team that was statistically last in multiple categories in the ACC. South Carolina defensive line transfer Keir Thomas should help in terms of figuring it out.

Too many inconsistencies will keep Florida State out of a bowl game, though. Losses to Notre Dame, Syracuse, North Carolina, Clemson, NC State, Boston College, and Florida will keep FSU home for bowl season for a third time in four years.

Malik Cunningham is a stud at quarterback for the Louisville Cardinals and head coach Scott Satterfield. The problem is, there’s not much around him.

Both receivers Tutu Atwell and Dez Fitzpatrick have left the college ranks after being drafted fairly high in the 2021 NFL Draft. Running back Javion Hawkins falls under the same category. That’s quite a trio to lose in the snap of a finger, especially after a disappointing 4-7 season.

Braden Smith and Marshon Ford are still around, but it may be a year of development offensively for the Cardinals. CJ Avery provides some continuity on the defensive side of the ball. Still, there’s plenty room for growth in what could be another rebuilding season for Louisville.

The Cards will pick up wins against Eastern Kentucky, UCF, Syracuse, and Duke. Ultimately, they face another disappointing 2021 season.

It’s been a rough go recently for Dino Babers and the folks up in Syracuse.

The Orange are coming off of a dismal 1-10 season. While many “super seniors” are now brought back into the fold, there isn’t much evidence that it’s going to get better.

Quarterback Tommy DeVito has been a liability since arriving on campus back in 2017, and it’s unclear whether or not Mississippi State quarterback Garrett Shrader can resolve any of the glaring issues.

Taj Harris is a nice target to have for whoever is lined up behind center for the Orange. Sean Tucker, the Orange’s top back, will return as well.

If last year was any inclination on how the defense will perform, it’s once again not going to be a pretty season for Syracuse. Mikel Jones and Garrett Wiliams will be the stars of the show. Behind those two, the Orange will have to fill some major holes in the secondary following the departures of Andre Cisco, Trill Williams, and Ifeatu Melifonwu.

It’s going to be another dud of a season for Syracuse. Wins over Ohio, Rutgers, Albany, and Florida State will be all it gets in what could be Babers’ final ride in upstate New York.