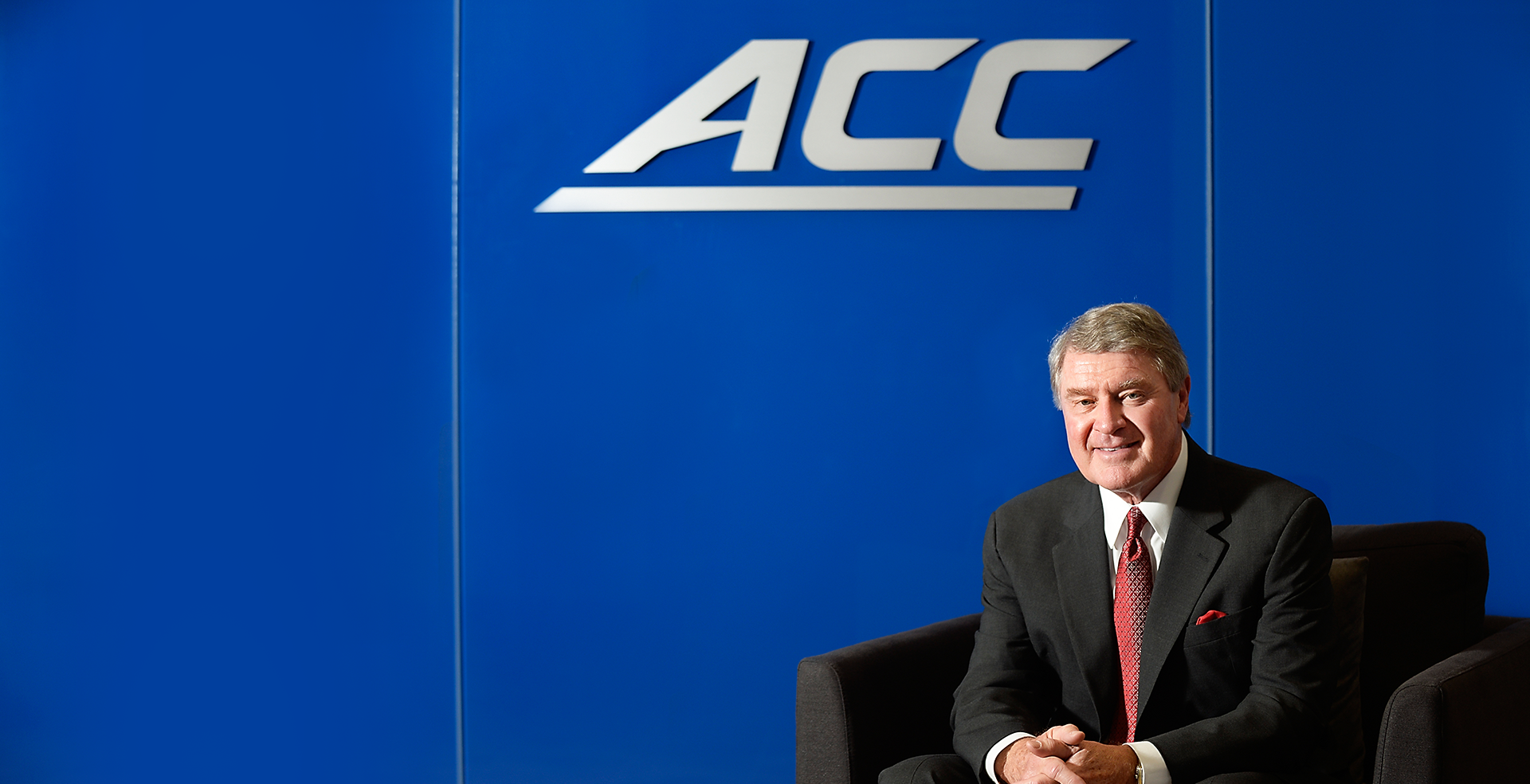 John Swofford, commissioner of the Atlantic Coast Conference since 1997, has announced his retirement.

From Wilkesboro to Chapel Hill

But let’s back up to Swofford’s “younger days”.

Swofford was born in North Wilkesboro, North Carolina. He went on to play quarterback for Wilkes Central High School where he was selected all-state twice. He was then awarded the prestigious Morehead Scholarship to attend the University of North Carolina at Chapel Hill, where he also played football.

Less than a decade later, Swofford would return to his alma mater as the athletics director. Swofford held that post from 1980 until 1997. While AD, he had Hall of Fame coaches Dean Smith and Mack Brown in men’s basketball and football, respectively.

1997 was the last year at UNC for Swofford, Smith and Brown. While at UNC, Swofford hired the first African American head coach in the ACC, track and field coach Hubert West in 1981. During his tenure at North Carolina, UNC claimed more ACC and NCAA championships than during any athletics director’s tenure in ACC history. The Tar Heels claimed the 1994 Sears Directors’ Cup, awarded to the top overall athletics program in the nation.

In 1997, Swofford left Chapel Hill for the office of ACC Commissioner. Since that day, he’s doubled the ACC’s annual revenue. And in 2000 and 2001, Swofford served as Chairman of the BCS. By the end of 2014, Swofford also expanded the ACC by adding Boston College, Virginia Tech, Miami, Pittsburgh, Syracuse, Louisville, and Notre Dame (a non-football member).

While ACC commissioner, there were four Capital One Cup championships given out to the ACC schools. Those annually go to the best Division I men’s and women’s athletic programs in the nation.

Swofford’s time in Chapel Hill would not be without controversy. In May 2012, UNC released the results of its own internal investigation into African and Afro-American Studies department (AFAM) classes. The report examined AFAM classes just from 2007-11.

Then in 2012, UNC released a report, commissioned by former North Carolina governor, Jim Martin. The report examined data back to the 1990s — part of Swofford’s time as UNC athletics director.

But due to a loophole in which there were also non-athlete students in the classes, the NCAA decided it did not have the authority to hand down punishment. The ACC, commissioned by Swofford, followed suit.

Statements from around the ACC

“Commissioner Swofford has guided the ACC through many challenges including expansion and the launch of ACC Network, thus positioning the conference for continued success well into the future,” wrote NC State Chancellor Randy Woodson. “Our entire league owes so much of its success to his steady hand and thoughtful leadership.”

“For over (20) years, John Swofford has been critical in upholding the ACC’s dual commitment to athletic and academic excellence and has led the conference with integrity,” Rev. John Jenkins, president of Notre Dame said in a statement. “We at Notre Dame are personally grateful to John for facilitating our entry into the conference in 2014, and for upholding the high standards of intercollegiate athletics for which the ACC stands.”

“A hearty congratulations to John Swofford for an absolutely amazing career,” Duke head women’s basketball coach Joanne McCallie said in her statement. “Your leadership within the ACC has been nothing short of tremendous. You have led us all through many transitions and much growth. All of us at Duke women’s basketball would like to say thank you. We are grateful for all your efforts and we wish the very best to you and your family for a wonderful retirement.”