My esteemed writer, John Cooper, has penned a wonderful article telling FSU fans to back off the ledge on benching Francois. While Frenchy has improved this year, I feel that sticking solely with Francois is a mistake, and that we should see some drives engineered by his backup, the Slim Reaper himself, James Blackman.

While it’s true that Deondre has passed for 1,377 yards, which ranks 13th in total, and 22nd in a per-game rate, let’s look at some other statistics and get a more complete picture.

In Taggart’s Gulf Coast Offense, the running game is the means by which the offense controls the ball, unlike the pro-style offense run previously, in which short passes controlled the ball. So we should therefore see a greater Yards/Attempt number from Deondre than that of 53rd in the nation. As shown above, Frenchy’s numbers here are much lower than Taggart’s previous 3 years’ worth of starting quarterbacks, especially when we look at Quentin Flowers, who was much more of a running quarterback than either Herbert or Francois.

Additionally, #12’s decision-making isn’t the best. During a pre-season coach’s conference, OC Walt Bell identified his musts at the Quarterback position. Chief among these is “Decision Making.” I do understand that Deondre isn’t as good of a quarterback as Tua at Alabama, but I would certainly expect more production out of Deondre than the signal-caller from that team a couple hours south of here.

John used this GIF to illustrate Deondre’s willingness to give up his body for his team. He makes the point that while Blackman leads on the sidelines – verbally, Deondre leads on the field – by example. There’s just one problem with that assertion – Blackman hasn’t had the chance this year to lead by example at all! Additionally, on this play, there’s a reason that Deondre is forced to give up his body – he hasn’t read this read option correctly. This goes back to his decision making, as Deondre is very reticent to keep the ball on both Zone Reads and RPOs. This lets the defense key on the tailback and commit to stopping him and him alone. The correct read here would’ve been to have kept the ball, as Akers was stonewalled to his own side enough to try to bounce to Deondre’s side for a hole.

I’m not saying that Deondre shouldn’t start, but I don’t know that he gives us the best chance to win. I believe that Taggart has made an error in judgement – while we had an easier slate of games, we should’ve seen what Blackman could do within the Gulf Coast Offense. Now, as we head into the veritable Murderer’s Row of games – Miami, Clemson, and Notre Dame – we have no idea what our options are at an already thin position.

Let us know in the comments what you think – how should playing time be broken out at the Quarterback position? 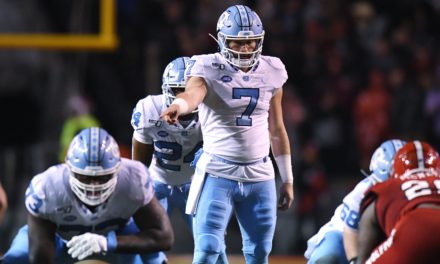